The BBQ Queens fire up the grills. 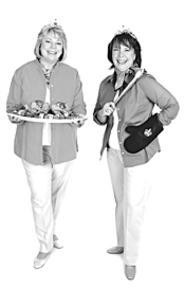 They've got a grill, and they know how to use it. The BBQ Queens come to town this week.
WED 6/15

There's a very good reason why the competitive BBQ circuit is a man's world. "Those guys have these big rigs and are working 12 hours," explains Karen Adler, co-author of The BBQ Queens' Big Book of Barbecue. "It's a business and livelihood to them. I don't know of any women who are [professional] rib-burners."

Still, that doesn't mean the ladies aren't grilling. Adler and Judith Fertig were opponents at Kansas City rib festivals when they decided to team up a few years ago and show the guys a thing or two about cooking slabs of meat. "We have different styles," says Adler. "She's more cutting-edge, restaurant-style, and I'm more down-home. So we get a good mix."

The BBQ Queens' Big Book of Barbecue is the first in a proposed series of recipes, tips, and stories from the backyard. "When we look at the book now, sometimes it's hard for us to remember whose recipe it is," says Adler. "And believe it or not, we still have each other over for barbecues." Adler and Fertig sign their book and present a grilling demonstration at 7 p.m. Wednesday at Joseph-Beth Booksellers, 24519 Cedar Road in Lyndhurst. Admission is free. Call 216-691-7000 for more info. -- Michael Gallucci

Calling All Elves
It's Magic at the Dungeon.

Before the Texas Hold 'Em craze, Magic: The Gathering was the nation's booming card game. Players assemble decks from thousands of collectible cards and compete in matches that can last minutes or hours. Equal parts poker, bridge, and chess, it's competitive but fun, says Al Heyne, owner of the Dungeon, which hosts daily internationally sanctioned Magic tournaments. "It's a social sport," he says. "There's not a lot of places you can play outside your home." On Fridays and Saturdays, the shop runs tournaments that can last till two in the morning. "We're more of a social club than a store," says Heyne. "Players can get some food, hang out, listen to music." Magic happens daily, starting at 1 p.m., at the Dungeon, 2367 North Ridge Road in Sheffield Township. A $10 entry fee includes cards; Saturday's tournaments (where you bring your own deck) are $1. Call 440-240-9170 for more info. -- D.X. Ferris

The last time Martin Scorsese made a Martin Scorsese movie -- you know what we're talking about: De Niro, f-bombs, and beatdowns -- was with 1995's Casino. And while it's no Taxi Driver or Raging Bull, it sure beats his period pieces and Scorsese-lite flicks like Gangs of New York. The 10th Anniversary Edition DVD (which comes out Tuesday) includes several behind-the-scenes looks at the movie's development and influence, deleted scenes, and an NBC News special on "Vegas and the Mob." But it's the three-hour movie itself -- a fact-based and violence-soaked exploration of a Las Vegas casino owner (De Niro), his woman (Sharon Stone, who was nominated for an Academy Award), and his henchman (Joe Pesci) -- that draws a royal flush. -- Michael Gallucci

Although it's changed its moniker, Art in the Village (formerly the Beachwood Arts Festival) still features 150 artists and their work. "Once a painting is completed, my job is finished," says participant Long Looi Lee. "What an observer thinks, sees, and feels is more than my tools can express." The free fest runs from 10 a.m. to 7 p.m. Saturday and 10 a.m. to 6 p.m. Sunday at Legacy Village, 25333 Cedar Road in Lyndhurst; call 216-382-3871. -- Lucy McKernan