Frederick Hart's works reach so far into the past that they lose meaning in the present. 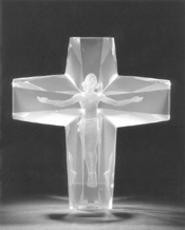 "Cross of the Millennium," Frederick Hart, acrylic resin.
Sculptor Frederick Hart is probably best known for the "Three Soldiers" bronze statue at the Vietnam Veterans Memorial in Washington, D.C. Hart's preparatory sculpture for the monument is now on view at the Contessa Gallery downtown as part of Frederick Hart: Transcendence and Renewal, an exhibit of about 40 works by the artist, who died in 1999 at the age of 56. Although the Vietnam study is impressive, most of the pieces in this show are cloying. Where Hart seems to aim for pathos, he more often achieves bathos.

Not for Hart the severities of minimalist art by sculptors like Dan Flavin (who works with commercial fluorescent lights) or Carl Andre (who simply placed sheets of hot-rolled steel on the floor). Rather, the Atlanta native fervently believed that modern art needed an infusion of 19th-century romanticism if it was to speak again to the public. Indeed, he became America's most popular sculptor, with sales exceeding $100 million. Hart continues to be an interesting phenomenon, because his work speaks to a pervasive cultural dissatisfaction with the direction of modern art. However, while Hart was against what he perceived as the idealization of rigid and overly intellectual art, he put artists like himself on another, though different kind of pedestal. Art, in his view, was a moral and spiritual enterprise. He encouraged artists to "go back in history, not to hide in the past, but to find a way to start over again. Not to relive the past, but to find in the past what is timeless, that we may carry it forward." The implication is clear: Those artists unwilling to follow these biblical-sounding instructions are mired in the chaotic, disorganized present and are creating useless things. He, by contrast, had found the Right Way, and anyone with an ounce of idealism left would do well to follow his example.

The show at Contessa includes work in bronze, cast stone, and clear acrylic resin. Evident in all of it is Hart's desire to create accessible art of impeccable craftsmanship that is attentive to religious values. The "Cross of the Millennium," for example, exploits the translucent properties of the clear acrylic resin to create what Hart has called "a sculpture made of pure light -- the very symbol of Christ." This, in fact, is one of the more impressive works. It has a lean, spare beauty not often in evidence elsewhere in the show, and, as Hart's statement suggests, form and content are one. There is something surreal (and thus modern) about it, too. One is reminded, when looking at it, of the cool geometrical forms in Dali's version of the Last Supper.

Hart's work isn't usually this economical or this emotionally arresting. For example, "Sisters," a bronze sculpture, is of two pre-Raphaelite women wearing diaphanous gowns that swirl in an imaginary breeze. Every wrinkle in those gowns is meticulously observed, the strands of hair are expertly delineated, and there are all sorts of ingenious contrasts between opaque sections of the acrylic and translucent parts. But the whole looks like something that would have been precious and sentimental even in 1880. That would be true of practically everything else in the exhibit.

An exception is the preparatory bronze statue for the Vietnam Veterans Memorial. While the attention to detail in "Sisters" only reinforced the sentimentality of that work, here such attention has an altogether different effect. Hart's devotion to getting all the details right in this sculpture pays emotional dividends. It tells the veteran that America cared about his service in the war. But devotees of modern art dismissed the work as a tired example of 19th-century realism. Where Hart was particularizing the individual Vietnam vet's service, Maya Lin had generalized the conflict with her abstract granite wall. Hart was condemned for italicizing what Lin had elegantly left out. That misses the issue. Lin's work is extraordinary -- abstraction that pulses with meaning -- but there is also room for Hart's realistic approach. The preparatory model at Contessa lacks a few of the details in the final version (the black soldier does not yet have the towel around his neck), but it suggests that even at this relatively early stage of the creative process, Hart knew exactly what he was after.

His dismissal of modern art is evident in most of his work. However, while one knows exactly what Hart is against, one isn't altogether sure of what he's for. Flavin and the rest may appeal to the left brain to the exclusion of the right, but one thing they cannot be accused of is a failure to take note of the world around them. Hart, for all his technical skill, often seems to be just an antiquarian with a sense of divine mission.