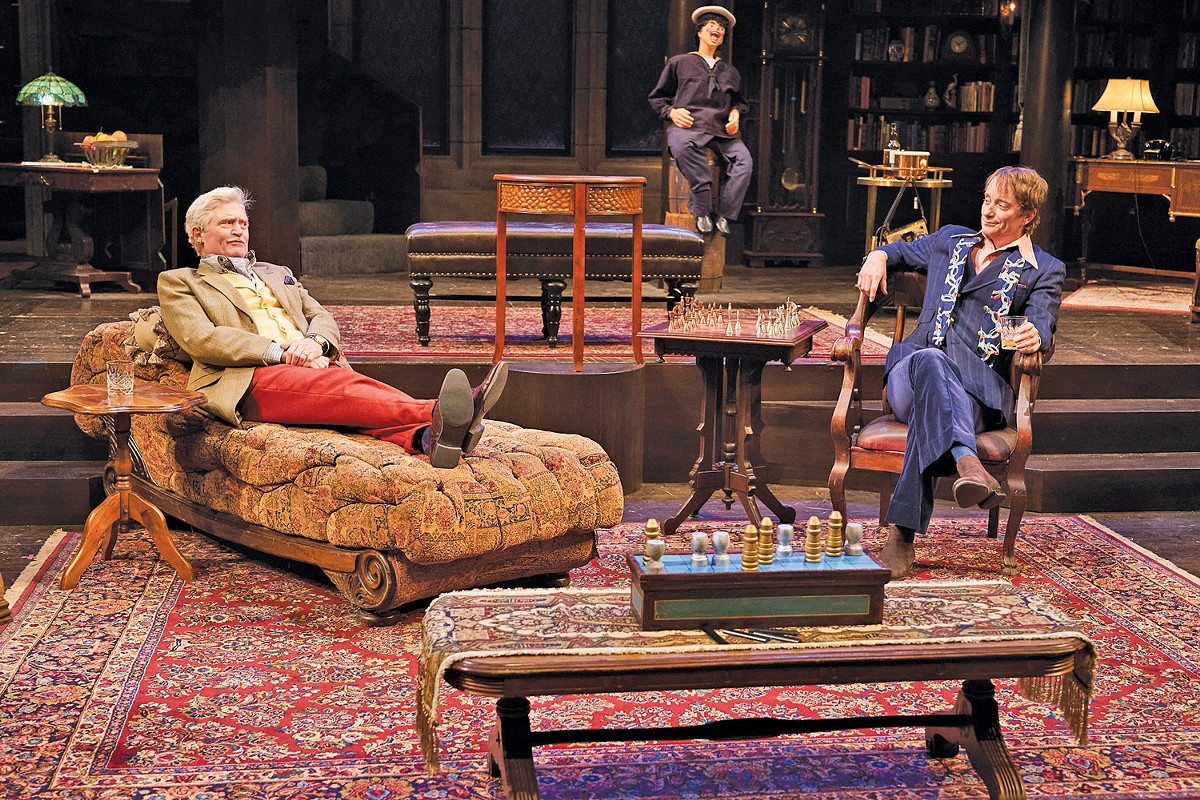 Through March 8, produced by Great Lakes Theater at the Hanna Theatre

You may be somewhat familiar with Sleuth, the mystery-thriller set in England that was written by Anthony Shaffer and turned into a 1972 movie starring Lawrence Olivier and Michael Caine. But did you know that the main character, the fearsomely erudite and clever Andrew Wyke, was fashioned after Stephen Sondheim?

It seems that Shaffer had once visited Sondheim's house and noticed how many games the renowned Broadway composer had collected. And in a later interview Shaffer admitted that the house where the action of Sleuth takes place, and the owner's predilection for games, accurately reflected a certain aspect of Sondheim's personality.

Of course, there are no Sondheim songs in this twisted tale of sexual passion that leads to greed and murder, with dashes of prejudice involving class and nationality thrown in for good measure. It's a mixed bag now at the Great Lakes Theater, since the plot turns that once caused gasps now just generate sighs. But it is saved by (at least) a couple of fine performances and Shaffer's witty and adroit dialogue that sparks brightly throughout the piece.

The young Italian hairdresser, Milo Tindle, is lured to the mansion of Mr. Wyke, a famous mystery writer noted for his passion for gamesmanship of all kinds. After handing Milo a drink, Andrew casually mentions that, "I understand you want to marry my wife." After a moment Milo agrees, and the game is on.

Turns out, Milo has been boffing Andrew's young wife Marguerite. And Andrew, who says he's done with the marriage, has a proposal: He wants Milo to steal her cache of jewels. That will enable Milo to sell the stuff and make a bundle so he can attend to the Margie's high-priced needs, while Andrew makes an insurance claim and walks away as a commitment-free man with a tidy sum himself.

That is the setup for an amalgam of mistaken identities, sharpshooting gunplay, insulting references to Italians, and a testosterone fest of mano a mano dick measuring. Fifty years ago when this play first hit Broadway, the twists and turns were breathtaking. However, in the ensuing years, many plays and films have explored the well-trod territory of shocking plot surprises — from the galaxy of hairpin turns in Memento to the complex back flips of Get Out and Gone Girl.

In comparison, the fairly lame tricks of Sleuth seem like a bland bit of cold porridge. And, of course, the treatment of the woman in this triangular relationship is offensive on many levels, a true indicator of that corrosive 1970s-era male mentality.

But what has aged as well is Shaffer's lush language. The words click together with the satisfying snap that only a top-flight writer can manage. Consider this verbal fencing after Milo mentions the amount of sex Marguerite requires. Andrew responds, "It's a good thing. I am pretty much of an Olympic sexual athlete." "Yes, I suppose these days you are concentrating more on the sprintsthan on the long-distance stuff." "Not so, dear boy! I am in the peak of condition. I could copulate for England at any distance." "Well, as they say in the Olympics, it's not the winning, it's the taking part that counts."

As the mellow and equally well-aged Andrew, David Anthony Smith is spry and focused, biting off Shaffer's juicy lines with evident relish. While it's not quite worth the price of admission to hear Smith articulate words such as "prestidigitation," it's close. And Jeffrey C. Hawkins offers just the right amount of lower-class bravado as Milo, making this standoff as believable as it's going to get.

Director Charles Fee keeps the pace fast and light, since material this flimsy can begin to collapse if leaned on too much. This includes a violent event that occurs at the first-act curtain. That is followed up in the second stanza as Andrew and Inspector Doppler from the local gendarmes discuss the situation. The scene has strong moments, but Andrew's stark terror of being locked away in prison isn't fully realized.

One of the other main characters in this production is the scenic design by Gage Williams. The expansive three-level set is beautifully detailed and features some trick props that do their thing right on cue. Also featured is an animatronic sailor, Jolly Jack Tar, that creepily laughs at his owner's jokes whenever Andrew pushes his button. That is sure to trigger creepy memories for anyone who recalls the crass cackling of Laughing Sal, the big mechanical woman who stood in front of the Fun House at old Euclid Beach Park. She sent little kids trembling into their moms' skirts decades ago. I mean, you know, I heard about it.

The stock-in-trade for Great Lakes Theater is evocative language, whether by Shakespeare or other theatrical luminaries. And this play, even while getting awfully gimpy in the knees, still has enough rich wordplay to make for a dandy evening.