Belly laughs without thinking too much? It's just the ticket 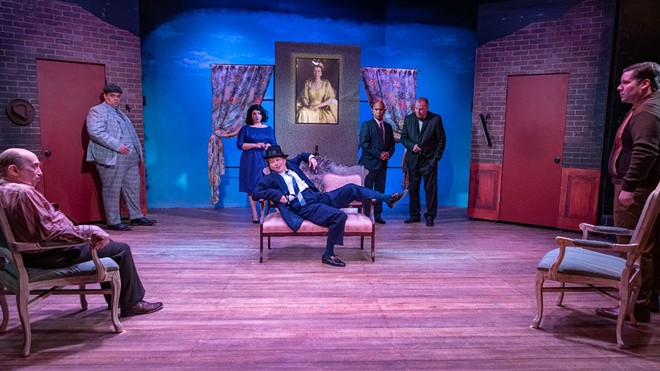 If you boil your life down to two major goals, getting food and sex, it becomes a bit easier to plan your days. And that is what drives the main character in the riotous commedia dell'arte romp "One Man, Two Guvnors," now at Blank Canvas Theatre. Loaded with intentionally one-dimensional characters, silly slapstick schtick, audience participation, some agile improvisation, lively band music, and a plot that joyously swerves through hairpin turns, it's a show that wants desperately to be loved.

Set in the blowsy environs of Brighton, England in 1963, Francis Henshall—played originally on Broadway by James Corden, a role that launched him into his "Late Late Show" TV gig—is a hefty fellow in a too-tight plaid suit who is hired by two different people to fetch and carry. But as noted above, Francis is only motivated by his twin obsessions. Meanwhile, his first boss, Roscoe Crabbe, has been murdered, but Roscoe is being impersonated by his twin sister Rachel (Shley Snider) to collect payment from his fiancée's father, the sleazy Charlie “the Duck” Clench.

You see, Roscoe was gay so Charlie had promised his slightly dim daughter Pauline (Katie Wells) in marriage as a beard for Roscoe. Trouble is, Pauline had already planned to marry a puffed-up wannabe actor Alan Dangle (a suitably dense Andrew Keller), son of Harry Dangle (John J. Polk), primary barrister in the law firm of Dangle, Berry and Bush. Of course, Rachel has her sights set on someone else too, the upper-class dunderhead Stanley Stubbers, who just happened to kill Roscoe. And all that's before Francis gets involved with sexy Dolly, Charlie's snarky bookkeeper.

Got all that? Doesn't matter. Suffice to say that Francis is working for two clueless guvnors: Roscoe who is really Rachel and Stanley who is hiding out from the Bobbies. It's a classic mixed-identity comedy setup, based on the classic 18th Century Carlo Goldoni work "The Servant of Two Masters" which has been the structure for countless comic plots through "I Love Lucy" to "Curb Your Enthusiasm."

A show like this requires split-second timing and a racecourse pace that doesn't allow for audience introspection. Since Francis is driven by base needs, as noted above, the production must transfer that single-minded focus to the audience for the humor to achieve lift-off. This production, directed by Anne McEvoy, achieves that airborne feeling more often than not, but there are a few character bits that flatline along the way. That said, when performances elevate as required it makes 1M,2G quite a satisfying treat.

In the linchpin role, Blank Canvas artistic director Patrick Ciamacco provides a galaxy of sly asides, stage winks and feints as he crafts the walking id that is Francis. His ultimate moment of physical humor is when he wrestles a heavy travel trunk from one side of the stage to the other. Ciamacco's performance is always compelling but at times feels downright menacing— he could exude a bit more lovability to smooth out those edges.

Among the supporting players, Noah Hrbek as the 85-year-old waiter Alfie stands out as he channels Tim Conway's frizzy-haired old man from "The Carol Burnett Show." During the Act One closing scene, when Francis is trying to serve one meal to his two guvnors in separate rooms, Alfie is a comedic force-multiplier: Whether he's shuffling with micro-steps, trembling, or being nearly electrocuted when someone twists his pacemaker to 11, Hrbek is a delight and you damn near want to give him his own show. Also providing good moments are Adam Harry as Stanley, Lindsay Pier as Dolly, and Mark Seven as Charlie.

If you want a few belly laughs without troubling your brain, "One Man, Two Guvnors" is just the ticket—and you may wind up with a co-starring role if you sit close enough to the stage.