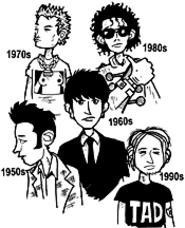 Ben Lokiec
Rock of ages at the Rock Hall.
Rock and roll has been showing its age lately. But 50 years is still pretty young, and there's no excuse for chugging along so listlessly (we're talking to you, Creed).

The Rock and Roll Hall of Fame and Museum is donning party hats April 13 for A Salute to Fifty Years of Rock and Roll, a benefit for itself, at the CSU Convocation Center. Drew Carey hosts a night of music that, theoretically, will cover all five decades. You can judge whether Big Bopper Jr., Sonny Geraci, Ian Hunter, Joan Jett, and Gerald Levert sufficiently sum up rock's 50 years. We offer five more appropriate choices for rock's golden anniversary. Check out the Rock Hall's concert, then buy these indispensable discs. They represent the real story behind five decades of rock and roll.


Elvis Presley: The Complete Sun Sessions -- The Rock Hall is placing rock's beginnings somewhere around 1952, which sounds about right. But it's Elvis's recordings for the tiny Sun label a couple of years later that carried rock into the mainstream. Or at least brought him to the attention of RCA, which quickly made him, and rock and roll, household words. Pandemonium, history, and Harum Scarum followed.

1960s:
The Beatles: Rubber Soul -- It's tough to pick just one Beatles album. Sgt. Pepper's Lonely Hearts Club Band, the White Album, Abbey Road, and just about any of the early singles compilations say as much about the era as J.F.K., M.L.K., and Vietnam. But Rubber Soul is where the mop-top poppers start to revolutionize rock's decade-old formula. Rubber Soul is where "yeah, yeah, yeah" turns into a sitar-laced aural collage. Rubber Soul marks the point halfway to timelessness.

1970s:
The Sex Pistols: Never Mind the Bollocks, Here's the Sex Pistols -- Seventies playlists were ruled by the saccharine schlock of the Carpenters (AM) and the hard, heavy thud of Led Zeppelin (FM). The Pistols, on their only album, goober in the face of it all. It didn't get them on the radio, but it did spawn an uprising. Bollocks isn't punk's best album, and the Pistols aren't the genre's best band (the Clash is), yet there's an eternal spite to the ineptness that encapsulates everything rock should be. They mean it, man.

1980s:
Michael Jackson: Thriller -- There are better '80s albums (Born in the U.S.A. and Purple Rain come to mind), but none packs the social relevance and impact of Thriller. Not only did it break radio's race barrier, it also used video as a promotional tool in making itself ubiquitous. And there's the music -- a stunning mix of pop, soul, and rock that still resonates today, whether in *NSYNC's jittery teen pop or rap-rock's blend of R&B elements and loud guitars.

1990s:
Nirvana: Nevermind -- Because it made Warrant, Bon Jovi, and every other big-hair clown look like the phonies they were. Because Kurt Cobain was a martyr waiting to happen. Because it gave birth to an alternative nation that bloomed beautifully before it sank into hollowness. Because rock needed them as much as they needed it. Just because.