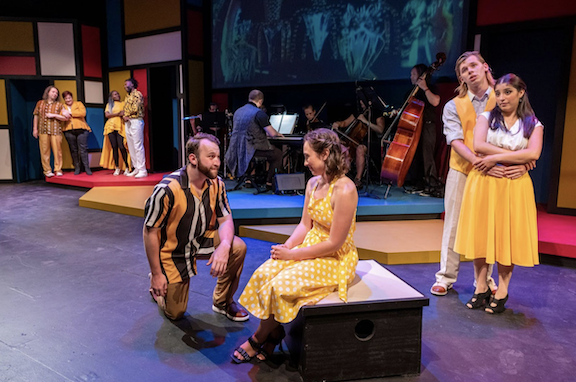 Courtesy Cain Park
A whole lot of Sondheim but something missing

You love Sondheim. I love Sondheim. All God's children love Sondheim. The dearly departed Stephen Sondheim is to American musical theater what Ted Williams and Babe Ruth are to baseball, with a string of astounding achievements so well-known and exceptional that I won't insult you by listing them.

This is all brought together in Sondheim on Sondheim, now at Cain Park, a revue featuring more than 40 full songs and samplings from Sondheim's enormous oeuvre. These are all introduced by archival and interview clips of Sondheim himself—some amusing, a few instructive, and a couple emotionally wrenching.

It's all set up to be a wonderful evening immersed in the Sondheim universe, yet this production fails to coalesce in the way one might want. Director Joanna May Cullinan has mounted many vibrant and memorable productions in recent years. But in this case, she doesn't find a way to bring all the disparate threads of Sondheim's career together and deliver an emotional punch.

Of course, the challenge is great since every song tells a different story, and the stories keep changing. Sondehim's video commentary is engaging, especially when he's talking about his writing quirks—he writes laying down so naps come more easily, he uses alcohol for an idea starter, and he uses very soft lead pencils that must frequently be sharpened, giving him multiple work breaks.

The songs themselves are performed by a talented eight-person cast, all in fine voice. These include Mario Clopton-Zymler, Aimee Collier, Andrea de la Fuente, Trey Gilpin, Frank Ivancic, Kate Klika, Connor Stout and Nicole Sumlin. While some of their acting is a bit forced at times, they do the songs justice, and that's a huge plus. Plus, each has a song or two where they shine, such as Sumlin and de la Fuente who knock out a fine dual rendition of "Losing My Mind" (Follies) and "Not a Day Goes By" (Merrily We Roll Along). And Stout does a tender job with "Finishing the Hat" (Sunday in the Park with George) which is, among other things, Sondheim's gorgeous paean to the creative process.

But the overall effect is less than stirring. One problem is that the lyrics are often buried under the volume of the music emanating from the nine-person orchestra that is plopped center stage, just a couple feet behind the performers. That balance between orchestra and singers is critical. (Note: This isn't a crotchety Boomer complaint. Yes, I'm old and may have lost a step in the 40-yard-dash, but I am blessed with the hearing of a vampire bat on steroids.) This inability to track Sondheim's words, especially in the unfamiliar tunes, is bothersome and ultimately defeating.

In addition, the set design (uncredited) forces conductor and lead keyboardist Jordan Cooper to face upstage, with the other musicians arrayed around him. Usually, the conductor faces the singers or at least has an angle to watch them. But Cooper is visually disconnected from the people whom his orchestra is accompanying, and that seems to have a direct effect on the production.

The scenic design also does the cast no favors. The arrangement of flats with single color panels arranged in a Mondrian-ish pattern is pleasing to the eye, but the four doors the actors use for entrances and exits add nothing but a way to separate them all. Maybe it's a way to enforce momentary social distancing, since area theaters are still battling cast and crew Covid infections and shutdowns.

An unintentionally creepy moment arrives courtesy of "The Gun Song" from Assassins with the singers each carrying a small handgun and trilling the lyrics: "All you have to do/Is move your little finger/Move your little finger/And you can change the world." As startling as that thought was when Sondheim wrote it more than 30 years ago, neither he nor any of us would have imagined the morbidity now that mass murderers "move their fingers" on AR-15s with 100-round drum magazines.

This iteration of Sondheim on Sondheim will still tweak the pleasure zones of Sondheim devotees, because how can you miss with this kind of material? But due to some odd design and directorial choices, this production doesn't quite "finish the hat."

Sondheim on Sondheim
Through August 14 at Cain Park. 14591 Superior Road between Taylor Road and Lee Road in Cleveland Heights, 216-371-3000, www.cainpark.com.