Photographer gets a piece of the rock. 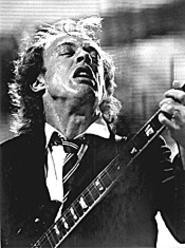 Rockers aren't the only ones sweating. Novak's often planted 400 feet away from the stage and given only 10 minutes to do his job. "You see an ocean of crazy people," says Novak, who migrated to Cleveland from Czechoslovakia in 1992. "Sometimes I get hit by beer bottles. Sometimes I get kicked in the head. I've been bleeding a couple times."

Fire in the Hole
Chili Pepper Festival turns up the heat.

The way Floyd Updegrove talks up his salsa recipe, you'll think Fear Factor with a gastrointestinal punch. Concoctions like Floyd's Fear Fart will be part of the Chili Pepper Festival, a 10-day tribute to the ultrahot vegetable that includes a chili contest, pepper-themed kids' games, and mild-to-wild salsa mixtures. Updegrove's signature creation is a blend of jalapeño, serrano, cayenne, and black peppers puréed in a food processor with roasted Thai and habanero chiles. "You'll get boiling, radioactive battery acid," jokes Updegrove, who recommends washing your hands during the process: "If you don't, then don't breathe in the dust, rub your eyes, or play with yourself." Wife Jolene is the salsa's biggest fan. "It's delicious, nutritious, and will burn the hell out of your mouth," she exclaims. "But don't flush it down the toilet without a Hazmat permit." The fest happens 10 a.m. to 5 p.m. Friday through August 22 at the Cleveland Botanical Garden, 11030 East Boulevard. Tickets are $7, $3 for kids; call 216-721-1600. -- Cris Glaser

Broken Promise
Isabelle Huppert shines as a hooker on the run.

Isabelle Huppert wears desperation and disappointment well. In La Vie Promise, she plays a prostitute on the run with her estranged 14-year-old daughter. The film occasionally slips into art-cinema melodrama -- classical music swells as Huppert makes her way across open fields -- but the veteran actress never falters. Whether packing up a few belongings after her kid stabs a pimp or roaming a sleepy village in search of her ex-husband and son, Huppert is riveting as a scarred and scared woman who is literally forgetting her past. La Vie Promise is at the Cleveland Cinematheque (11141 East Boulevard) at 6 p.m. Saturday and 7 p.m. Sunday. Admission is $8; call 216-421-7450. -- Michael Gallucci

More than 20 well-informed zookeepers will be on hand to answer questions and conduct demonstrations at Saturday's Creature Comforts -- Animal Enrichment Day at Cleveland Metroparks Zoo. That's just a fancy way of saying that animals will get as close to their natural environments as possible, with pond fishing for the bears and hidden treats for the monkeys. It takes place 10 a.m. to 4 p.m. at the zoo, 3900 Wildlife Way. Admission is $9, $4 for kids; call 216-661-6500. -- Michael Gallucci