A riveting new show unearths treasures from photography's past and present. 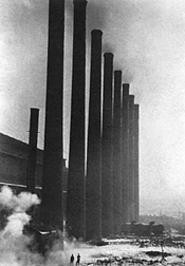 "Smokestacks, Otis Steel Company" (detail), by Margaret Bourke-White, gelatin silver print.
At the turn of the 20th century, two famous composers had an argument about the purpose of music. Jean Sibelius, the Finn, said that what he liked best about composing symphonies was the opportunity for paring away nonessentials so he could arrive at something that was concise. Gustav Mahler, the Austrian, snarled that the symphony was like life and thus it had to embrace the world. Framed and Shot, the compelling new exhibit at Oberlin College's Allen Memorial Art Museum, is decidedly more Mahler than Sibelius: It covers 160 years of photography, and its overall theme is that photographers have given voice to every aspect of human experience.

Expansive exhibits like this one were a common sight on the artistic landscape in 1990, when photography celebrated its 150th birthday. The Museum of Modern Art in New York (the first stateside museum to have formed a photography department) put on an ambitious show that year, called Photography Until Now. But as Stephan F.F. Jost, the curator of the Oberlin show, points out, blockbusters like the one at MoMA tended to "describe the history of photography as a linear progression of technical and aesthetic developments." In other words, these exhibits argued that, as photographic techniques became more advanced, artists felt increasingly confident about tackling new themes and putting novel twists on well-worn ones.

For Jost and others, this approach didn't do justice to the "broad range of aesthetic, technical, and intellectual strategies" used by photographers, because it segregated technical matters from aesthetic and intellectual concerns. Jost, instead, seems to be arguing that the power of photography resides in its ability to be many things at once. There are several strands of meaning in a fine photograph, and the wonder is that these all operate simultaneously. As critic Jed Perl has written about a Depression-era photograph by Walker Evans: "It's many things all at once: a meditation on late Victorian furniture design; a factual report about Sunday school attendance in the Alabama of the 1930s; and an essay in cubist aesthetics."

This interest in simultaneity informs every aspect of the Oberlin show. Although Jost presents the approximately 100 photos under nine general themes ("Photographs of Famous People" and "Photography and Abstraction" are examples), it's the combination that counts. When taken together, these categories emphasize the diverse ways in which artists have used the camera to frame and document (or shoot) given subjects -- hence the title of the show. Included here are such classics as Margaret Bourke-White's "Smokestacks, Otis Steel Company" (1928), an example of photography's ability to combine an interest in massive forms with a meticulous attention to detail (here in the service of an ominous vision of big industry on the eve of the Great Depression); Alfred Stieglitz's forays in Venice; and a Diane Arbus portrait, of a young pro-war marcher bedecked in "Bomb Hanoi" buttons, that is less about an unpopular war and the people who supported it than a chilling gaze into the dark side of political activism.

This is also a very modern way of conceiving a photography exhibit, because it lets the viewers in on the thought processes that went into creating the show. As literary critic Malcolm Bradbury has written, "The insistence on revealing just how it is that art creates its illusions is one of the deepest themes in modernism." Jost's categories are like actors in a play, which are then guided by the director (the curator) to coalesce into a unified whole. We are being shown how things work backstage.

Photography is good at suggesting the bustle of life -- the random energy of the subway station and the noonday crowd rushing back to the office after lunch. In the right hands, such neutral scenes can be transformed into haunting slices of contemporary life. That's what happens with Lee Friedlander's "Self Portrait in Truck Mirror, Rt 9w, New York State" (1969) and Walker Evans's "Sidewalk in Vicksburg, Mississippi" (1935). The Friedlander shot shows the artist at far left, reflected in a truck side mirror, while the right-hand side of the frame (the photo is split in half by a vertical line formed by the truck's hood) features telephone poles and a building bearing a sign that says "God Bless America." This mirror view of the artist emphasizes the role of the camera, not as a giver of neutral reportage, but as a device capable of showing us who we are at moments when others aren't looking. Here, the combination of portrait, patriotic sign, and vertical line suggests that some people (the artist?) are split off from the hope and optimism that the sign offers. Not, it seems, because they are economically hurting, but because they are too busy looking at mirrors to notice what is going on around them. Is this, on some level, a criticism of self-absorption?

Certainly, viewing this shot now, one thinks of Cindy Sherman, who has made a name for herself by dressing up in costumes and photographing herself in poses that recall the movie stars of yesteryear. She's been called the Madonna of the art world, and with good reason: She's always changing, and she always seems to be one step ahead of her imitators. Her portraits (two of which appear in this show) don't engage in self-analysis, though. Unlike Nan Goldin, whose portrait of herself a month after being severely beaten by an abusive boyfriend confronts us at this show with disturbing force, Sherman's self-portraits are camera-conscious in a glib way. Sherman goes onstage, performs, and then withdraws into a privacy to which the camera does not have access. Although we see the performance and marvel at Sherman's chameleon-like versatility, we never get any insight into who she is or why she might be engaged in these projects. That's probably the point: One does not understand the Pacific Ocean, we seem to be told, it's simply there, and woe to the people who think they can swim across it. Unfortunately, this kind of defiance does not often make for interesting photography. Sherman, like Madonna, has a first-rate political sensibility and an inferior artistic imagination.

The Walker Evans shot mentioned above is one of the highlights of the show. It blends social commentary with formal elegance without, in the process, prettifying the gritty Mississippi street that it documents. It demonstrates one of the paradoxes of photography: A photo can be tied to a particular place and time (here, the Depression-torn South), but, by dint of the artist's clear and unsentimental gaze, there is majesty where you least expect to find it. The black men in the shot are out of work. Their shoulders are hunched, and they withhold their gaze. The unity in the shot is Evans's own: He finds formal analogies between the wheels of a car and a centrally placed man's hat; rumpled newspaper is contrasted with smooth steel. There is a car in this shot, but the only sense of movement comes from the mastery of the photographer (his way of leading the viewer around the frame by balancing shapes and textures). Photography can't help these people find work. What it does do is stamp their situation indelibly in our memories.

This is an inexhaustible show, and anyone who cares about photography as an art form will want to see it. The Allen Memorial Art Museum has an extensive photography collection, and this is a rare chance to see works that are usually stored away. There are superb examples of many artists' photos; plus the thought-provoking curatorial work that informs the show adds to the experience. Finally, it's a tribute to the museum. Though it started its collection in earnest only 30 years ago (this is not startling when one remembers that MoMA started its now-famous photography department as recently as 1940), it demonstrates with this fine exhibit that it has chosen wisely and well.