The Sportsman lubes Browns fans for the big Steelers tilt. 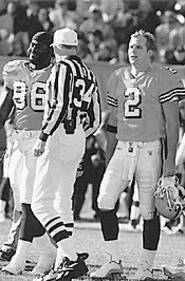 Walter Novak
Prepare for the Browns-Steelers game by drinking lots of beer at the Sportsman.
SUN 11/23

Mickey Koral won't forget last year's Browns Versus Steelers Party. Browns fans without tickets to the home game squeezed into his tiny Sportsman Restaurant -- only to watch Pittsburgh squeeze out a 23-20 nailbiter. "It was a packed crowd, rowdy," Koral says. "Fans have a thing against Pittsburgh."

To comfort them, Koral served up meatloaf, corned beef, and turkey dinners. Even a Steeler straggler or two ("saboteurs," as Koral calls them) braved the mob. More cold weather this year should keep the place packed. "The colder, the better," Koral says. "Just like the beer." The party gets started at 9 a.m. Sunday (game time is 1 p.m.) at the Sportsman, 101 St. Clair Avenue. Admission is free; call 216-861-5168. -- Cris Glaser

Lord of the Rink

At 45, Scott Hamilton can still land a Flying Camel with the best of them. The Olympic gold medalist proves it again at Saturday's Evening With Scott Hamilton & Friends on Ice. Pals include fellow Olympians Paul Wylie, Rosalynn Sumners, Caryn Kadavy, and Parker Pennington. Between routines, Aretha Franklin (no slouch on skates herself) will belt a song or two. Blades hit the ice at 5 p.m. at Gund Arena, 1 Gateway Plaza. Tickets range from $24.50 to $59.50, available by calling 216-241-5555. -- Cris Glaser

Coffee With the Birds sounds like a chance to sip Folgers with wrens and robins, but it's about dispensing tips on what to feed the stragglers that didn't head south for the winter. Naturalist Tim Krynak says that fatty foods top the list. "They're great sources of energy," he says, rattling off a series of culinary delights: peanut butter, kitchen fat, suet, and seeds, among them. "The birds we're looking at are winter residents that are here year-round," he adds. Expect to see woodpeckers, song sparrows, and titmice through binoculars provided by the park. The java's complimentary too. It's at 9 a.m. Saturday at Rocky River Nature Center (24000 Valley Parkway in North Olmsted). Admission is free, but registration is required; call 440-734-6660. -- Allen Miller