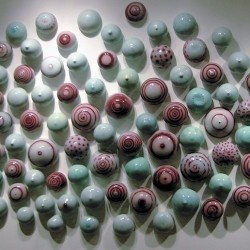 In the mid-1950s, sculptor Richard Hunt's strongly symbolic, deeply physical, sensuous manner was recognized as an original and important voice on the national scene. Categorized with artists like Helen Frankenthaler and Cy Twombly as a "second generation" abstract expressionist, Hunt's roughly cascading, winding, dancing forms connect with fundamental psychological and natural conditions. Balanced as if on the verge of recognition, they remain powerfully mysterious, moving quickly in and out of darkness, infused with archetypal emotions of Shakespearean breadth. And despite their impulsive, hand-hewn roughness, works like "Poseidon" (2008) or "Totem" (1998), included in the moving exhibit Shaping the Spirit on view through October 25 at the Sculpture Center, are not short stories of process and happenstance - they're more like protagonists acting in the great drama that art has unfolded over centuries of activity. A room full of Hunt's sculpture is a soul-scratching thorn brake of sharply branching forms and bending, reaching gestures, as Hunt's half-human shapes struggle toward birth and redemption, sustained by waters flowing from the roots of history.

Plainly stated, Richard Hunt is one of America's greatest sculptors. Born in Chicago in 1935, he began working in bronze and steel as a very young man, making the acquaintance and earning the respect of just about every legendary artist of the abstract expressionist period. In 1971, at the age of 36, he was the first African American to receive a retrospective exhibition at the Museum of Modern Art in New York. That same year, the Art Institute of Chicago also honored him with a comprehensive showing of his work.

"It's a bit mind-boggling," says Ann Albano, director of the Sculpture Center and curator of Shaping the Spirit, which is made up of about 30 small sculptures and maquettes (working models) of much larger public sculptures. "He lived in both Chicago and New York, and knew most of the major figures based in both places."

In concise, helpful wall text, Albano points out connections between Hunt and the lyrically expressive metal sculptures of artists like abstract expressionist David Smith in the late 1940s and Julio Gonzalez, the great Spanish sculptor who introduced welding techniques to modernist sculpture around 1920. Albano also points out that the hotly fluid, melting quality of Hunt's forms brings to mind the organic, wavering, hallucinatory paintings of abstract expressionist Arshile Gorky, as well as the magical, polymorphous Afro-Cuban art of Wifredo Lam.

Even the smallest of Hunt's models and original sculptures at the Sculpture Center have a monumental feel to them. This is due, in part, to the integral relationship Hunt cultivates between the dancing, figurative flickering of the upper half of many of his works and the architectonic strength of the bases that support and blend into them. As its title indicates, the welded bronze maquette "Build - Grow" (2008), for instance, with its crescent-shaped thrusts, rises like a quick storm of legend from a tapering, almost temple-like open structure, a parable of ideal form giving birth to spirit. The full-sized "Build - Grow" occupies a site in Washington, D.C. More than half of the works at the Sculpture Center are studies for the sometimes enormous public commissions that have been the main focus of Hunt's work since the late 1960s, when he began fabricating "Play" for the John J. Madden Center in Hines, Illinois. For Hunt, that was the beginning of a new era and a new maturity, as his ideas and models were reproduced on a relatively gigantic scale, moving out under the sky to punctuate and give meaning to public spaces all over the country. One of the important relationships with artists and artisans that developed during these years was his friendship with artist and educator Ron Dewey, who happens to be a trustee of the Sculpture Center. Dewey's Cleveland-based foundries have fabricated many of Hunt's works over the past four decades.

During that period, Hunt completed scores of public commissions, from New York to Los Angeles; Illinois alone has 48 works at sites all over the state, including 25 in Chicago. Cleveland would have two of its own, if one project proposed during Mike White's administration for Settler's Landing hadn't been scrapped (three bronze and stainless steel maquettes for that work are on display at the Sculpture Center exhibit). The one public Hunt sculpture we do have, called "Sentimental Scale and Wedge," is wrapped in shadows at the top of a flight of steps leading up from West 3rd to a now-closed entrance at the Justice Center. It's worth a visit. The two-part work evokes bitter patience and enforced separation, weighing along with right and wrong in the damaged balance of human justice.Ê EVA KWONG'S ceramic sculptures, on view through October 11 at William Busta Gallery in her solo show Noetic Energy, explore the web of infinities among which a human sense of scale is suspended. If sculpture always tries to incarnate the evolving understanding humans have of their place in the world, we are most aware at the present moment of the delicacy of the membranes that enclose the various ecosystems of our planet and ourselves.

It's a sign of both deeper scientific understanding and an evolving biological aesthetic - and maybe an expression of our wiggly, unstable era - that the visual notation used to describe fundamental chemical entities no longer consists only of clean, minimalist-style diagrams. If you Google recent research on the enzyme known as PEPCK (crucial to the understanding of the ramifications of glucose metabolism), you'll find a Wikipedia article illustrated by a highly imaginative rendering of that biochemical catalyst; in fact, it looks like a doodly, blob-and-pinion style postmodern painting. Such are the micro-populations of 21st century subjectivity - a self that contains more multitudes than even Walt Whitman conceived. It's no wonder that Eva Kwong (who, as Kent State University Gallery Director Anderson Turner observes in a catalog essay for the exhibit, has influenced artists around the world during the several decades of her career), uses microscopic entities like bacteria and diatoms as a model for her meditations on life's fluid interconnections.

Ê"Noetic" is an adjective meaning both intellectual and imaginative; Kwong's sea-green, glistening, alien-seeming forms are like newly arrived living organisms, washed into the gallery not from another world, but across the normally immutable barriers of relative scale. "Energy Vibrations" (2008) consists of a number of globular pale green objects, many of which bear moist-looking, bloodshot concentric circles or spirals; others are speckled with darker green or red flecks. Some have a nipple-like bulge in the center. Like most of Kwong's major recent works, this installation of more than 100 roughly 3-inch diameter units could conceivably be larger, or smaller, and is designed to colonize an entire wall. Here they cluster in an oval formation, resting on the wall as if defying gravity, like bubbles on the side of a bathtub. Resembling some sort of pulsating protein from an intracellular, cytosolic sea, they seem to swell and shift if you gaze at them too long or glance away. Their smoothly shining surface reads as living tissue, tempting the eye to discern an imaginary throbbing, urging the hand to reach out - possibly to be poisoned or shocked.

Across the gallery, the squiggly, colorfully coiling elements of "Organic Glyphs III" (2007) spread out from a corner, diverging at right angles along two walls. Spotted and striped like small, exotic snakes approximately 10 inches in length, this work is from Kwong's "Bacteria, Diatoms, and Cells" series and looks like a vivid dream inspired by a view through a powerful microscope. As the title indicates, the elements of this piece also seem like marks in an unknown, perhaps unknowable script. The word or phrase they spell could be a unicellular poem about the magic of movement and transformation.

ÊKwong's most expansive work on view, "Noetic Moments" (2008), is another very fluid installation made up of several dozen misty jade-colored plaques. Like petri dishes growing bacterial cultures or drops of water swarming with life, these again reveal a biological ur-text of interconnected looping forms and dotted lines, rendered in brownish tones against the water-green over-all glaze - messages cast upon the seas of our own intimate being. Kwong's achievement is to give a sense of life to the dimensions and features of a realm that can exist for us only as a "noetic" phenomenon, as a place in the mind. But where else do we truly live?Ê BRIEFLY NOTED: Also on view at William Busta Gallery: Membranes by Craig Lucas. Linking candy-coated color to memories of flesh with loopy, syncopated pop geometry, Lucas' gouache on paper 'branes are time portals to an American dream. ÊCeramic Heads by Kirk Mangus. Numinous animistic vessels by the noted Ohio ceramicist seem to be on loan from the collective unconscious. Inspired by folk art jugs, they're poised to laugh, bite or lead you astray.Ê