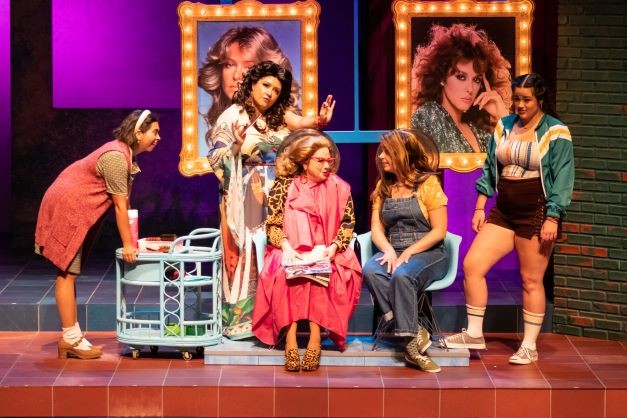 Photo by Hillary Taylor, courtesy of the Alabama Shakespeare Festival
The cast of American Mariachi

There's a special power in a song. And no, I don't mean the earworm of "Girls Just Want to Have Fun" that's been playing on a loop in your head all day. I mean the power many have observed with elderly family members or friends, who have forgotten almost everything except the lyrics of songs from their youth.

That is the very real foundation of the touring show now occupying the Cleveland Play House's Allen Theatre stage, "American Mariachi," a sweet but overly simplistic look at what happens when five young Chicano women in the 1970s decide to start their own Mariachi band. The music is lively throughout and the performers give it their all. But a pedestrian and predictable book by José Cruz González doesn't provide the actors enough runway to lift this work to another level.

It begins with grandmother Amalia (Gigi Cervantes), who is sliding into dementia but who responds to a Mariachi record her grown granddaughter plays. Unfortunately, Lucha's father Federico enters, angry at the disturbance, and accidentally breaks the 45-record. So Lucha decides, along with her cousin Boli, to start their own Mariachi band so they can play Amalia's favorite tune and perhaps restore some of her memories.

But Mariachi bands usually number at least four people, and their search for other performers seems doomed to failure until Lucha and Boli decide that their new recruits can be non-musicians like themselves. They'll all learn together! While dealing with the difficulty of that task, the play tries to grapple with the cultural challenge posed by these young women who are stepping onto traditionally macho turf—all Mariachi bands at that time were exclusively male.

This fact is reinforced by the fully-outfitted male Mariachi musicians, who stand in doorways and alcoves playing music between scenes and generally cast a domineering presence on the proceedings. This is the dramatic tension that González and director Henry Godinez choose not to address with much specificity. While that may be a sensible choice that reflects the culture of these characters, it works less well theatrically. There is also an over-the-top stereotyped gay character inserted in the middle of the play that clanks as harshly as Mickey Rooney's portrayal of a Japanese man in the film "Breakfast at Tiffany's."

That said, some performers rise above the book. As Boli, Lucy Godinez knows how to handle a punchline and her physical presence and attitude is always on point. The other new Mariachi players have characters that are hinted at but not developed. Soyla is a hairdresser played by Gloria Viveca Benavides with teasing sauciness, but she disappears quickly into the quintet. As do Amanda Raquel Martinez as Gabby (who has a husband problem) and the hesitant Isabel.

In a play with a theme that wants to celebrate female empowerment, there is too little time spent in letting us know and care about these tradition-busting women. And since the work is essentially a jukebox Mariachi musical (no original songs), that leaves ample room for exploring those characters in more detail. Instead, we are given limp platitudes such as "Find your dream and follow it," which has been said many times before, and better.

Family love and cultural tradition are compelling forces when set against the need for women to assert their independence. "American Mariachi" would come much more alive if the creators engaged with that dramatic fact instead of singing their way around it.