Tales From the City 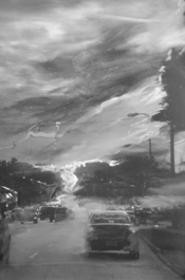 "The Day Ahead," by Lissa Bockrath, oil on photograph.
Trail of Narratives, the new show at downtown's Here Here Gallery, is a thought-provoking sampler of local art. Out of the 139 works on display, not everything is compelling, but the best of them deal with topics like AIDS-related illness, the media coverage of this year's presidential race, and the connection between '50s pinup icon Jayne Mansfield and satanic ritual. This is an edgy show that is never boring.

Frank Green, local arts writer and nationally known performance artist, has curated the show skillfully. The curatorial challenge when dealing with so much art fresh from the studio is to decide on an organizing idea for the show that both lets the art speak for itself and gives viewers some kind of road map to negotiate their way through the variety. Green's idea -- that the show is a mix of "stories, partial stories, and near stories" -- is a good one, because it accomplishes both of these objectives.

Some of these stories are undeniably disturbing. For example, there is Green's own "Self-Portrait as Case Study," a series of gruesome inkjet prints of 35mm photographs that show parts of the artist's body covered with lesions (created with red makeup). What is the story here? The artist is evoking medical textbook case studies of AIDS sufferers, but by making himself the object of a study of his own choosing, he is wresting control over his own (or an alternate persona's) fate from the medical students who typically look at such photographs. It's a dig at the medical profession, because it asserts that sufferers, on some level, know more about their own disease than a doctor could. It also suggests that such a sufferer would know more than a doctor about how a cure can be effected -- the artist created the lesions with makeup, so the implication is that he could wash them away himself with soap and water. This piece is not easy to look at, but it jolts the viewer into a new awareness of a contemporary problem.

So, in a different way, do the 25 works in the show by the Reverend Albert Wagner. Working with bright, unmodulated colors and emotionally charged subject matter (often of a religious nature), the works, at their best, speak directly to the viewer with an unforced eloquence. The primitive means and deliberately unsophisticated handling of materials recall folk art and outsider art, but more important is Wagner's childlike approach to his religious subject matter. Take a work like "End of the Trail." It portrays a Christ figure that recalls a Byzantine icon, but the droopy, half-closed eyes and the sagging beard are the artist's own take on the subject. In addition, the deep blue background suggests the life-sustaining impact of water on every human being's life. A connection is made between water and religious faith, which, for Wagner, is equally life-sustaining. Wagner is in his 70s, but here is an art that achieves something of the untutored simplicity that mid-century artists like Jean Dubuffet so admired in children's art.

Some of the narratives are humorous, too. For starters, take Terry Durst's "Representation," a title that does not prepare one for this floor installation composed of laser images of Bush and Gore surrounded by thousands of Froot Loops (yes, the breakfast cereal). Aside from poking fun at this exhibition's willingness to feature art that might not have the widest market (this one is defiantly unmarketable -- how would you transport all those Froot Loops?), Durst reminds us that presidential candidates nowadays are marketed like detergent, cigarettes, or even breakfast cereal. Does this mean that Ralph Nader is the Wheaties candidate?

Next, take a look at Chris Yarmock's collages dealing with Jayne Mansfield. There are 30 of them in the show, and they've got titles like "St. Jayne of Hollywood Takes a Ride" and "Hell or Bust." The pieces combine images of champagne glasses, brightly colored pills, cutouts of Jayne from '50s mags, and images of satanic ritual. These works actually are only peripherally about Jayne Mansfield. The pills and champagne suggest real addictions, but the main idea is to poke fun at the American obsession with celebrity. Fame, John Updike once noted, is like a mask that eats away the face of its wearer. The disturbing thing about Yarmock's Satan-worshiping St. Jayne is that she is no more fake than the one that audiences and film producers created in the 1950s. These works offer some bite along with the laughs.

The narrative trail becomes considerably more somber with works by Lissa Bockrath, Dexter Davis, and Douglas Max Utter. Bockrath starts with conventional color photographs of typical Cleveland scenes, but then paints on them. The result is a grim post-apocalyptic feel. In "The Day Ahead," the intensely colored orange sky makes one wonder whether the people driving these cars on this particular morning will die from nuclear radiation before they reach the office and their first cup of coffee. There is an overwrought feeling here, and the impression is of glibness, of pop nihilism.

Douglas Max Utter's enormous canvas, called "Rain, Cleveland, Intersection of I-90 and West 106," makes a stronger impression. Fashioned from tar, oil, latex, and shellac, this moody work evokes the feeling of a Cleveland afternoon when thundershowers make everything dull and dreary. Dexter Davis, meanwhile, turns in a collage called "Parasite," a mask-like face that recalls African sculpture. This, too, is a densely layered piece that works up a good deal of emotional momentum.

With Christa Donner's "Abdominal Adventures," one reaches the exhibit's showstopper. The artist drew directly on the gallery wall a series of images that recalls frames of a film or cells of a comic strip. The subject matter is women and the often uneasy relationships they have with their bodies. Donner depicts her 20-something subjects in moments of distress -- biting their nails, a green haze descending over their faces, or with their abdominal innards exposed and seemingly possessing a life all their own. Mixed among the drawn figures are pages from medical textbooks detailing female anatomical structures. This contrast between cold scientific precision and felt experience is one theme in this multilayered work. What impresses above all is Donner's ability to sustain interest over a long span of space, to fuse bits of narrative together so that their sequence feels inevitable for the viewer. Her method is cinematic. She alternates close-ups with long shots, objective shots with point-of-view shots. Furthermore, some images rendered in miniature are repeated elsewhere enlarged. The content of the narrative eludes classification -- it all depends on how one chooses to link up the images. What is evident, though, is that Donner has proved once again that she is one of the area's most talented younger artists.

This exhibit demonstrates the diversity of visual art creation in the city. It's a good step forward for Here Here Gallery, and there is enough intriguing work to make it worth your time.