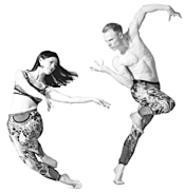 Back on pointe: Paul Taylor Dance Company rolls into town this week.
SAT 5/14

Andy LeBeau can credit a pinched nerve for getting his career off the ground with the legendary Paul Taylor Dance Company.

After back surgery in 1989, LeBeau's physician suggested that he take up ballet. "I think that most doctors would be very surprised to hear my story," says the 37-year-old LeBeau. "My neurologist thought that if I strengthened my stomach muscles, it would alleviate the pressure on my spine. Lo and behold, it worked." LeBeau joined the Taylor troupe four years later.

The company is celebrating its 50th year in modern dance with a nationwide tour. The show consists of three pieces, including the upbeat "Black Tuesday," set to Depression-era music from Tin Pan Alley, and "Promethean Fire," whose choreography has been called a "human cathedral" of bodies that form a pyramid. LeBeau is particularly proud of "Klezmerbluegrass" because of its Appalachian ties to Jewish folk music. "When you hear it," says LeBeau, "it becomes obvious that this incredibly funny mix of music has a Jewish feel, but also a country-bumpkin beat." Show time is 8 p.m. Saturday at the State Theatre, 1519 Euclid Avenue. Tickets are $16 to $45; call 440-914-0744. -- Cris Glaser

Sax and Violins
A soloist horns in on the Cleveland Orchestra.

The last time Joseph Lulloff performed Ingolf Dahl's "Concerto for Alto Saxophone," he dropped and damaged what was then a brand-new instrument. But there was an upside: It played even better after repairs. Cleveland will benefit from the improvements this weekend, when Lulloff makes his debut with the Cleveland Orchestra, playing Dahl's concerto -- one of only a handful of classical saxophone pieces. "I've looked forward to this for a long time," says Lulloff. "This is a dream come true. The orchestra is taking a bold step in doing this." The work incorporates several music genres and places unusually high demands on the saxophonist. "It showcases the sax to its best advantage," says Lulloff. "It draws the listener in by setting up a whole new level of expectation." Show times are 8 p.m. Thursday through Saturday at Severance Hall, 11001 Euclid Avenue. Tickets are $27 to $75; call 216-231-1111. -- Zachary Lewis

Colin Quinn has done his homework . . . or maybe not. "I saw a documentary on Cleveland," he says. "It was this song, 'Cleveland Rocks,' and people come out, and they dance. It's about a minute long, and this guy has glasses." The former host of Tough Crowd With Colin Quinn and onetime Saturday Night Live regular is returning to his stand-up roots by embarking on a tour that brings him to town this week. "I love stand-up more than any of it," he says. "There's something about it that you just love. It never gets old." Quinn performs at the Improv (2000 Sycamore Street) at 8 p.m. Thursday and 8 and 10:15 p.m. Friday and Saturday. Tickets are $21; call 216-696-4677. -- P.F. Wilson

Ten studs strip to their briefs at Friday's Mens UnderwearStore.com Model Search Contest. A ballot count from the audience will decide Cleveland's delegate, whose photo will be posted alongside 38 other beefcakes from around the country. An online vote will determine the top model, who'll pose in a photo shoot and pocket $1,000. De-briefing starts at 10 p.m. Friday at A Man's World, 2901 Detroit Avenue. Admission is free; call 216-906-6860. -- Cris Glaser