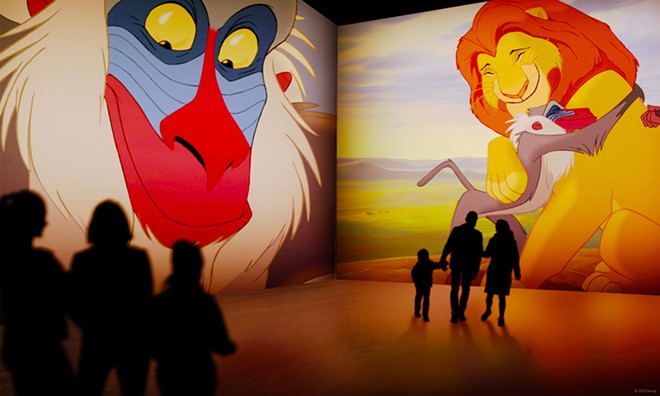 Walt Disney Animation Studios announced last week that it was partnering with Lighthouse Immersive Studios, the producers of Immersive Van Gogh, to develop an immersive Disney experience that will tour North American cities next year. It can be counted upon, like most Disney products, to make millions and millions of dollars.

The "Disney Animation Immersive Experience" will premiere in Toronto in December and then will come to Cleveland — along with Nashville, Detroit, Denver, Boston, San Antonio, Las Vegas, Minneapolis and Columbus — over the first few months of 2023.

Who knows what the final product will look like.  A montage? A sing-along?

If it's anything like Immersive Van Gogh, attendees can expect to pay top dollar for a mildly stimulating encounter lasting about 30 minutes, the essential purpose of which is to sell branded merchandise. An official trailer for the experience corroborates. It's the sort of looped content you'd expect to experience passively en route to something else.

A press release teased that the Disney Immersive Experience would "present the music and artistry within Disney Animation’s canon of films—from hits of today like Encanto, Zootopia and Frozen, to all of the classics including The Lion King, Peter Pan and Pinocchio. Audiences will feel like they’ve entered the incredible worlds of beloved Disney characters and become one with them."

“Like so many of us, I have a life-long love of Disney films,” said Corey Ross, the founder of Lighthouse Immersive Studios. “I’ve grown up with them since childhood and so has my family. The work lends itself brilliantly to the immersive experience and I am confident this program will give our guests the opportunity to be engulfed in the world of Disney, making them feel like they’re standing next to their favorite characters and seeing the world through their eyes.”

People sure do love this stuff. In Cleveland alone, more than 175,000 tickets were sold to the Van Gogh exhibit, resulting in a one-month extension of its run at a warehouse on E. 72nd Street.

And given the way kiddos go bananas for Frozen and Encanto, it's not at all a surprise that Disney studio execs would find a hot new ways to present their top titles and repackage old favorites for audiences. This is nothing new, of course. The immersive experience follows in the stately footsteps of Disney on Ice, Disney on Broadway and, more recently, the barren Disney live-action remakes.

Sam Allard is the Senior Writer at Scene, in which capacity he covers politics and power and writes about movies when time permits. He's a graduate of the Medill School of Journalism at Northwestern University and the NEOMFA at Cleveland State. Prior to joining Scene, he was encamped in Sarajevo, Bosnia, on an...
Read More about Sam Allard
Scroll to read more Arts Stories & Interviews articles