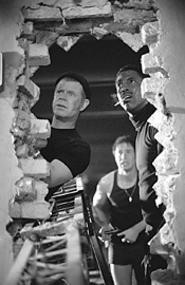 A breakout cast leads the Russos' first film.
It's fitting that filmmaking brothers Anthony and Joe Russo would pick a family restaurant in Little Italy to meet in. Their debut feature film, Welcome to Collinwood, which they wrote and directed, is filled with tasty ethnic vignettes and local color. Set "somewhere in Cleveland" (as its opening title card informs us), Collinwood, which was filmed around town last year, is as much about our city's heritage as Parma pierogi and Mayfield Road cannoli.

"We grew up here," says Joe. "Cleveland is emblematic of the industrial decline of the 20th century, and the movie is a metaphor of the American dream. And Collinwood is a microcosm of Cleveland."

The film itself is a refreshingly old-fashioned crime caper (no Tarantinoesque pop-culture quips here), in which a group of local losers prepares to break into an apartment to get to a safe. It's based on the 1958 Italian comedy Big Deal on Madonna Street; at times, however, it's hard to tell just when the action on-screen is taking place.

"The movie is a fable," Joe says. "We wanted it to be intentionally ambiguous in terms of a time frame, because we wanted a heightened sense of realism, so people can look past the story and try to understand the subtext of the film."

"Neighborhoods like Collinwood are not connected to a national retail culture," adds Anthony. "They just don't buy new things often. People are wearing thrift-store stuff, cars are older, people don't change the facades of their houses or businesses."

Unlike other Cleveland-based, -set, and -filmed movies, Collinwood benefits from a game cast (including Sam Rockwell, William H. Macy, and Luis Guzmán) and the production skills of Steven Soderbergh and George Clooney, who has a small but funny turn as a wheelchair-bound safecracker who tutors the gang.

"They were a constant source of creative ideas," Anthony says. "They're ideal collaborators, because at the end of the day, they know that we're the directors and the film is our vision. They never forced us into anything."

The brothers, who placed a film at the 1997 Slamdance Festival and met Soderbergh because of it, took the Oscar-winning director up on his offer to help with future projects. With Soderbergh and Clooney's Section Eight production company on board, there was no question of fillming the movie elsewhere. Actually, "It was an issue for about a minute," Joe says. "But once Steven and George said, 'No, this is a Cleveland film, and it's being filmed in Cleveland,' it put an end to the discussion."

So, can we expect a boom in Cleveland-based, -set, and -filmed flicks in the future? "We hope so. Our intention is to help Cleveland in any way that we can," says Joe, adding that the Russos' next project will be another Cleveland film. "Cleveland has a very unique look, which is a double-edged sword, because we want [the movie to have] our look. At the same time, there's a great advantage in a city like Cleveland."

Says Anthony, "We want to be a catalyst."