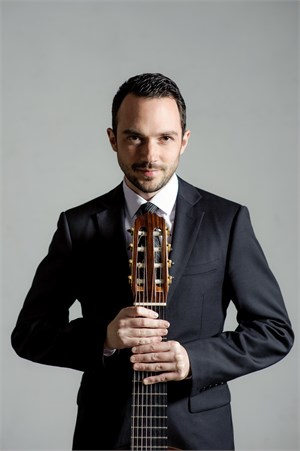 June blasts off with several classical music festivals. We’ll spotlight one of them this week — the Cleveland International Classical Guitar Festival, which returns live to Mixon Hall at the Cleveland Institute of Music after a two-year exile online.

In addition to a packed weekend of performances by international guitar heroes (four of them duo performances with other instrumentalists), the Festival incorporates the final rounds of the James Stroud International Competition for young guitarists. For an overview of the festival, read our interviews with Armin Kelly and James Stroud.

The Stroud Semifinal Round will take up most of the day on Friday, June 3, and the surviving four finalists will appear in the Final Round on Sunday, June 5 beginning at 6:30 pm.

- Ever wonder how musicians can make up music on the spot? PianoCleveland’s Listening Series brings GRAMMY-nominated jazz pianist and composer Gerald Clayton to town for “Conversations on Improvisation” at the Bop Stop on June 1 at 7:30 pm (repeated at the same hour on June 2). Ticket price includes small bites and a drink ticket. Book here.

- CityMusic Cleveland has ordered a new work from composer Dawn Avery and the Pantheon Ensemble will premiere her Peace at The Temple-Tifereth Israel on June 2 and at the Shrine Church of St. Stanislaus on June 3, both at 7 pm and both free (but reservations are encouraged).

Music at Main will host Good Company, A Vocal Ensemble in a free performance in celebration of LGBTQ+ PRIDE month on June 4 at 2pm in the 3rd floor lobby of the Cleveland Public Library, Main Branch, downtown.

Delayed by the pandemic, The Cleveland Orchestra will present its annual Martin Luther King, Jr. Celebration Concert on June 4 at 7 pm, Vinay Parameswaran, conducting, with Jacqueline Echols, soprano, Tony Sias, narrator & the Martin Luther King, Jr. Celebration Chorus, Dr. William Henry Caldwell, director. Free tickets have long been distributed, but the performance will be live streamed free on the Orchestra’s Adella app, Adella.Live, and on YouTube and broadcast live on 90.3 WCLV Classical 104.9, 89.7 WKSU, on ideastream.org, and on the Ideastream Public Media app.

- The Cleveland Chamber Collective will perform the third installment of its “Music of America” series at Disciples Christian Church on June 5 at 3pm, including works by Ty Emerson, Ryan Charles Ramer, William Grant Still, and George Walker.

- As a prelude to next week’s featured festival, Matt Haimovitz will play the opening event in the Lev Aronson Cello Festival on June 6 at 7 at CIM. Usually held in Dallas, the festival honors the late principal cello of the Dallas Symphony and teacher of Cleveland Orchestra cellist Brian Thornton, and will bring dozens of professional cellists to town for a packed week of events. The second concert on June 7 features L.A. Philharmonic principal Ben Hong. Scan the whole list of events here.

- And organist Jonathan Moyer will close out the current season of “Tuesday Noons at the Covenant” in University Circle with a 12 pm program on June 7 that you can attend in person or hear via live stream.

More concerts can be found on the Clevelandclassical.com Concert Listings page.
Scroll to read more Things to Do articles
Join the Cleveland Scene Press Club