The Great Poet Wallace Stevens, Who Worked as an Insurance Executive is Spotlighted in Things As They Are 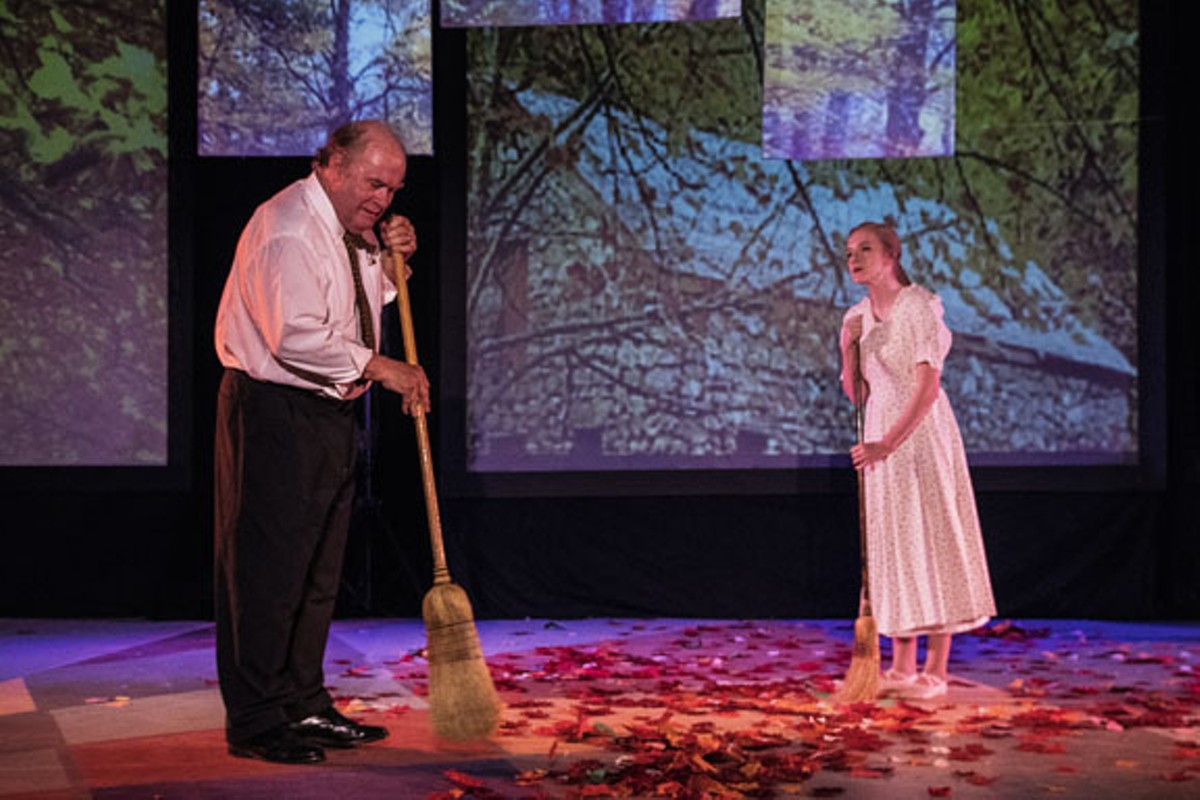 Things As They Are

Through May 28, produced by Playwrights Local

There's a play going on now on the spacious second floor of the Reinberger Auditorium that you should pay attention to, even though it is overly long and full of excesses. It is the world premiere of Things As They Are by David Todd, local playwright and artistic director of Playwrights Local, the company producing this piece.

There are several reasons to be interested in this play, not the least of which is its subject, the poet Wallace Stevens. Stevens became well known due to winning two National Book Awards and a Pulitzer Prize in the first half of the 20th century for his sensuous and naturalistic poetry.

Aside from his insightful writing, Stevens has always been a curious figure since he spent his entire adult life as a nearly invisible insurance executive at the Hartford Accident and Indemnity Company. Indeed, photos of Stevens in his later years show a man who appears to be every inch the insurance guy, without a whiff of what one might consider poetic inspiration. Even his co-workers were surprised to learn that soft-spoken Wally at the end of the hall had become an icon in poetic circles. He was, to many, a "walking imponderable."

In this play, Todd endeavors to wrap his arms around all the glories and contradictions of this man, succeeding marvelously at many times. And director Anjanette Hall adds numerous touches to the script that bring into clarity aspects of the story. But the production lingers too long and too often on incidental staging tropes while some dialog scenes play out with obvious predictability.

Among the things that work wonderfully is the visual and sonic landscape that Todd and his design team have created. Eight screens of various sizes hang above the floor-level stage, showing evocative images designed by set and projection designer T. Paul Lowry. Sometimes literal (an office bookcase) and sometimes dreamy (modern art), the projections mesh nicely with the accompanying original music provided by Ben Chasny on guitar and John Elliott on synthesizer. Those element reflects Stevens' interest in the musicality of poetry, as in his "Peter Quince at the Clavier" which has twice been adapted for music.

Into that lush environment step two actors playing Stevens at different ages: Jason Markouc as the younger and Robert Hawkes as the older. Their scenes are interspersed throughout the play, and some work better than others. Markouc is stiff and intense as the young Stevens, and we see him being wooed by a masked chorus, in comedia dell'arte style, as they tweak him into revealing his inner passions. As the elder Stevens, Hawkes embodies the stolid and reserved insurance honcho, but attempts at revealing Stevens' more lyrical side in other ways, including some dance moves, are less effective.

Todd's script struggles to gain momentum in the first act because of too many disconnected scenes, forced exposition, excessive attention to falling (and fallen) leaves and confetti, and a shifting focus on who Stevens was. Not so the second act, which begins with a bracing encounter between the curmudgeonly Stevens (played by Hawkes) and his contemporaries Ernest Hemingway and Robert Frost. It's witty and lively—if only Act One had started there.

No matter where you start, the magic of Wallace Stevens resides in his words, and sometimes those words are not completely intelligible due to lazy diction by some cast members and fuzzy amplification of pre-recorded material. And that's too bad, because those words are often dazzling.

Take his well-known poem "The Snow Man," for instance, which is presented in the play complete with a snowman prop. The screens show lovely images of winter trees laden with snow, but Stevens' spare words in that short and crystalline poem are not given the space needed to absorb them. It is a vexing challenge to present poetry on stage, since exceptional verse often requires some time for re-reading and reflection. But if that is the task you have set for yourself, the production must do everything possible to achieve it. Happily, three poems (including "The Snow Man") are provided in the program and help the audience connect with this great man's gift.

Among the rest of the cast, Laura Starnik stands out as Wally's wife Elsie and Robert Branch adds his quirky presence to several characters, as does Jeanne Task as one of the more impish masked performers.

Clearly, Todd and Hall and their team have many ideas at work here, and their dedication to the subject matter is evident throughout. But it would all work better if the extraneous staging effects were trimmed, the audience brought in closer, and the script tightened to concentrate more on Stevens' works. But this is a great subject for a play and this risk-taking production, even with its substantial wrinkles, is worth a look.