'The Last Starfighter' at Blank Canvas Theatre Goes Off Course

A few pleasures can be found, however, in between the many, many songs 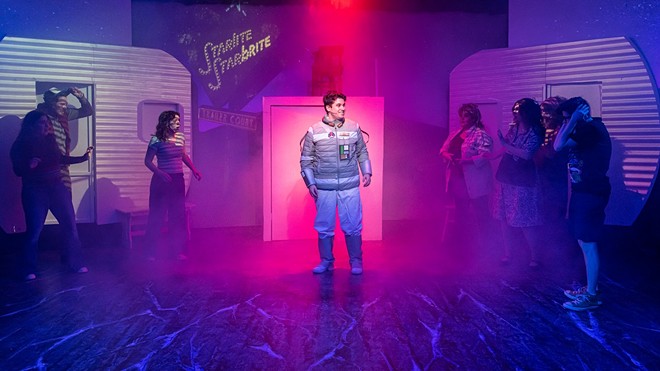 Who doesn't like a good space yarn? As the recent Apple TV series "For All Mankind" has shown, there's a galaxy of good stories to be told about the people who yearn to reach for the stars.

In 1984, the unassuming film "The Last Starfighter" took an intentionally ridiculous swing at that genre, and then 20 years later it was turned into a musical. That adaptation would seem like the perfect material for Blank Canvas Theatre, whose exceptional artistic director Patrick Ciamacco specializes in taking vigorously goofy or off-center scripts, particularly ones with singing and dancing, and turning them into gold. But in the case of The Last Starfighter (the musical), the best efforts of show director Ciamacco are sabotaged by a cast that is largely ill-suited to the task.

The story is built around Alex, a trailer park custodian who fixes the residents' leaky pipes with duct tape and bubble gum. But his real passion, along with racking up big scores on the park's Starfighter arcade game console and canoodling with his best girl Maggie (Mikaela Ray), is to dream "to be as far away from here as possible."

When he smashes the game's scoring record, his achievement is noted intergalactically and he is soon visited by a bald alien in a dress suit, Centauri, who tricks Alex to fly with him into the far reaches of space, where he pleads for Alex to help fight evil in the person of Zur (Jon Fancher) an alien overlord who plans to attack many galaxies, including Earth's.

From there, this adaptation of Jonathan Betuel's screenplay, with book by Fred Landau and music and lyrics by Skip Kennon, lurches from one plot point to another, dispensing with promising story threads as it reaches for the conclusion and Alex's ultimate destination.

Trouble is, that journey has many obstacles in store, most of which are the songs that are methodically butchered by the Blank Canvas cast. Sure, Kennon's songs are a mess themselves, a collection of haphazard tunes that seem like they were put together by a particularly inattentive group of Fifth Graders.

Those disappointing ditties could perhaps be rescued by a stellar group of singers. But this cast under the musical direction of Bradley Wyner appears incapable of carrying a tune without smashing into sharps and flats at every turn. Okay, not the whole cast: Lang, Fancher, and especially Ray have some lovely melodic moments. It is important to note that the rest of the 14-person singing-challenged cast, who will go mercifully unnamed here, are not at fault. Not everyone can sing and they should be protected from having to do so in public for a paying audience.

Aside from the songs—there are 19 of them, roughly 16 too many—there are some small but definite pleasures. One is Ciamacco's projection design, which provides a nice zing of star travel. Another is the performance of Noah Haren as Alex's little brother Louis. Vibrating visibly and contorting his body with enthusiasm, Haren is a must-see performer at all times and during his song "Zandozan." Even when he's just dancing in a group, he reminds one of an effusive young Jim Carrey. Danny Simpson is also briefly a hoot as Zur in his featured song, but then his story line is ejected like so much space trash.

In program notes, Ciamacco posits the show as crazy, silly, sci-fi fun. And that might be the case for those who don't consider singing on tune mandatory for a musical, no matter the silliness quotient, come and get it. For those who do, you may want to take a cue from Alex and be as far away as possible.