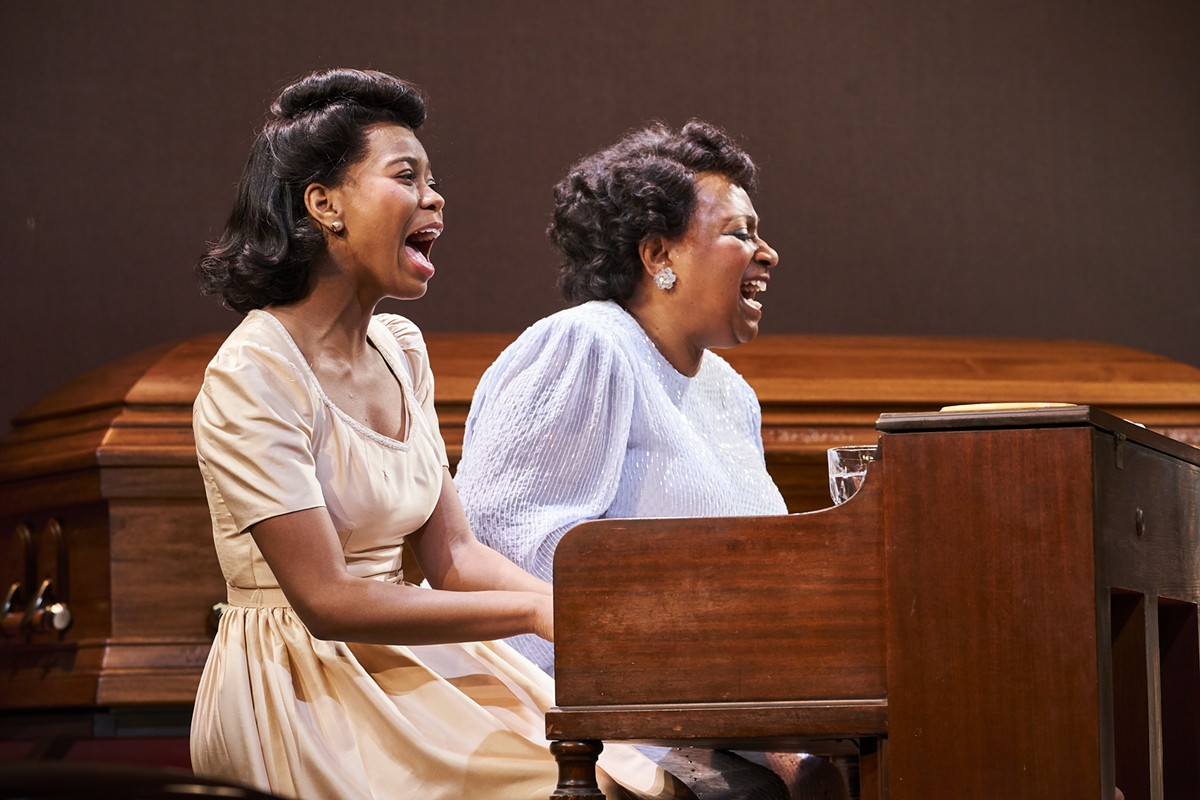 There are many reasons why Sister Rosetta Tharpe deserves a show of her own. This African-American gospel singer and musician was a seminal influence on rock and roll — a fact confirmed by her impending installation in the Rock & Roll Hall of Fame, slated for this year. Back in the 1930s and '40s, she infused irresistible rhythms into inspirational songs that connected with folks on a vibrant, visceral level.

It's a shame that this play, Marie and Rosetta, doesn't do justice to the force that Tharpe was: on stage, in recordings, and on the lives of countless performers who came after her. As fashioned by Cleveland playwright George Brant, the play attempts to capture the outsized personality of Tharpe while relating her budding relationship with Marie Knight, a young, black backup singer for Mahalia Jackson who Tharpe took under her wing and installed as a co-equal performer for a few years in the late 1940s.

Brant makes some good decisions about the structure of the play, eschewing the tired musician-bio trope of chronologically charting each blip on the artist's career. And he wisely defers to a lot of music, as the two performers present more than a dozen of Tharpe's signature songs. Miche Braden, as Rosetta, brings a powerful set of pipes and some stirring vocals to the effort.

Unfortunately, that's pretty much where the good news ends. The 105-minute one-act is set, supposedly, in a funeral home in Mississippi where famous Rosetta is getting to know Marie (Chaz Hodges), informing the younger woman that she will no longer be singing backup, she'll be side by side with the gospel luminary herself. As Marie helpfully applies makeup to Rosetta's face, they are surrounded by coffins in this back room of the parlor. The women contemplate having to sleep there since they won't be welcomed in any of the local hotel establishments.

There are several reasons why the play doesn't fully come alive. For one, neither Braden nor Hodges actually pound the onstage keyboard or pluck the guitars. The real musicians (Katreese Barnes on piano and KJ Denhert on guitar) are tucked away behind an upstage scrim. While the actors do their best to mime playing the instruments, there's something missing since Braden never turns to face the audience and wail, as Rosetta did (and every star guitarist does) when playing her axe. Instead, Braden has to face sideways or upstage to hide the fact the sounds aren't coming from her hands.

That little trickery wouldn't mean much in some shows. But when you're trying to capture the essence of a woman who created such a powerful presence on stage by linking her audience to her dynamism, those small turns and feints eventually suck the energy out of the performance.

Add to that the dialogue between the two women that never rises above being self-congratulatory and banal. It's clear that Marie respects Rosetta and Rosetta thinks Marie is beautiful, but the women's widely rumored intimate relationship in real life is never addressed in this piece. As a result, it's a love fest without any dramatic tension or depth. And the segues from dialogue to song are often forced. Rosetta to Marie: "Why don't you sing something for me now?"

There are a few times when some sparks seem about to fly, as when Rosetta is complaining about "Saint Mahalia" and that singer's insistence on singing only in churches, while Rosetta prefers bars and clubs. When Rosetta chides Marie for being too spiritual in her singing and not putting enough "hips in her joy," any potential conflict is quickly swallowed up in hugs and smiles.

After an hour, one begins to wonder why the entire show is confined to this coffin storage room at the funeral parlor. The answer doesn't come until the last 10 minutes, when details of the careers of both women come rushing out in a flurry, along with a maudlin story twist that is too clever by half. This is when the makeup scene that began the show takes on a new meaning.

Brant is an accomplished writer (his excellent play Grounded is now at Dobama), and he invests Rosetta's lines with plenty of sassy ripostes so that we get a sense of that part of her personality. But the more nuanced aspects of her and Marie's characters are often ignored in the run-ups to more songs.

As Marie, Hodges indeed looks very pretty, prim and proper, but she's too invisible. When she complains to Rosetta about the older woman's singing style — "You took a gospel song and made it sound dirty" — it doesn't display the hurt that this woman raised on traditional expressions of spirituality should feel. And neither the script nor Hodges credibly convey how Marie was won over to Rosetta's earthy approach to gospel.

When the music succeeds in really rocking out, in renditions of "I Want a Tall Skinny Papa" and "Four or Five Times," it feels like M&R could actually reach some interesting heights. But the pedestrian script and uninspired directing by Neil Pepe only serve to keep this musical icon where she started: In need of a really honest and compelling exploration of her career and her gift.