The Line Is Still Busy 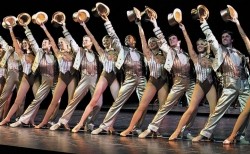 In the weeks leading up to a presidential election, it's natural to expect the air to be permeated with conflicting lunatic slanders and shameless hyperbole. But we don't expect the same calumnies to be applied in theatrical terms to a road company revival of a 33-year-old musical that once set theater geeks everywhere palpitating in lachrymose ecstasy. Yet a conspicuous local newspaper reviewer - perhaps rendered dyspeptic by hemorrhoids or a bad day in the press room - heralded the touring edition of A Chorus Line currently visiting the Palace as mere "flabby navel-gazing." This, in our considered opinion, is pure piffle.

On the other side of the hyperbolic divide, there are those area billboards decorated with a shot of the show's legendary finale of a strutting line of dancers in gold lamé, underneath which a logo proclaims: "The best musical. Ever." We scratch our heads in disbelief. Where does that leave My Fair Lady and Kiss Me, Kate? The "ever" is a special kind of overkill because in the very same year as Chorus Line's debut came the vastly more skillful and wiser musical Chicago, which synopsized the narcissism of show business far better than its contemporary, even with its theater setting.

Anyone aware of theatrical lore knows of A Chorus Line's fascinating birth. Director-choreographer Michael Bennett taped hundreds of hours of aspiring young dancers recounting their experiences and memories. Utilizing a crew of writers, lyricists and a composer, these confessions were spliced into a 90-minute compilation that became the basis of the eventual musical that struck audiences as an instant revelation. By having the testimonial dancers play fictionalized representations of themselves, its initial immediacy made the work seem blazing. The problem with subsequent editions was that, with the instigating actors succeeded by replacements, the immediacy disappeared. The inherent cliches of the characters - less than artfully disguised by the show's second-rate score - became more apparent.

What remains solid and true in A Chorus Line is its theatricality. The mixture of songs and monologues that reveal the collective testamentary tribulations of adolescence still strike a universal note with audiences.

The well-delineated, suspenseful ordeal of the audition process, the godlike control of the director and the use of mirrors to create a three-dimensional composite of the dances all retain, even in subsequent reincarnations, the power to embody the essence of musical theater.

The current road company is directed by Bob Avian, a co-choreographer of the original production. Without necessarily being able to restore the initial impact, he knows how to make a dance musical function. The entire, eminently talented cast is notable for its synchronous perfection, especially a little blonde firecracker bursting with star potential named Gabrielle Ruiz.

The producers have wisely retained the 1975 setting, making an affecting period piece B.C.P. (before cell phones) for younger audience members. And for musical aficionados over 40, it's a rueful reminder of a long-gone rite of passage: sort of a bar mitzvah in dance shoes.