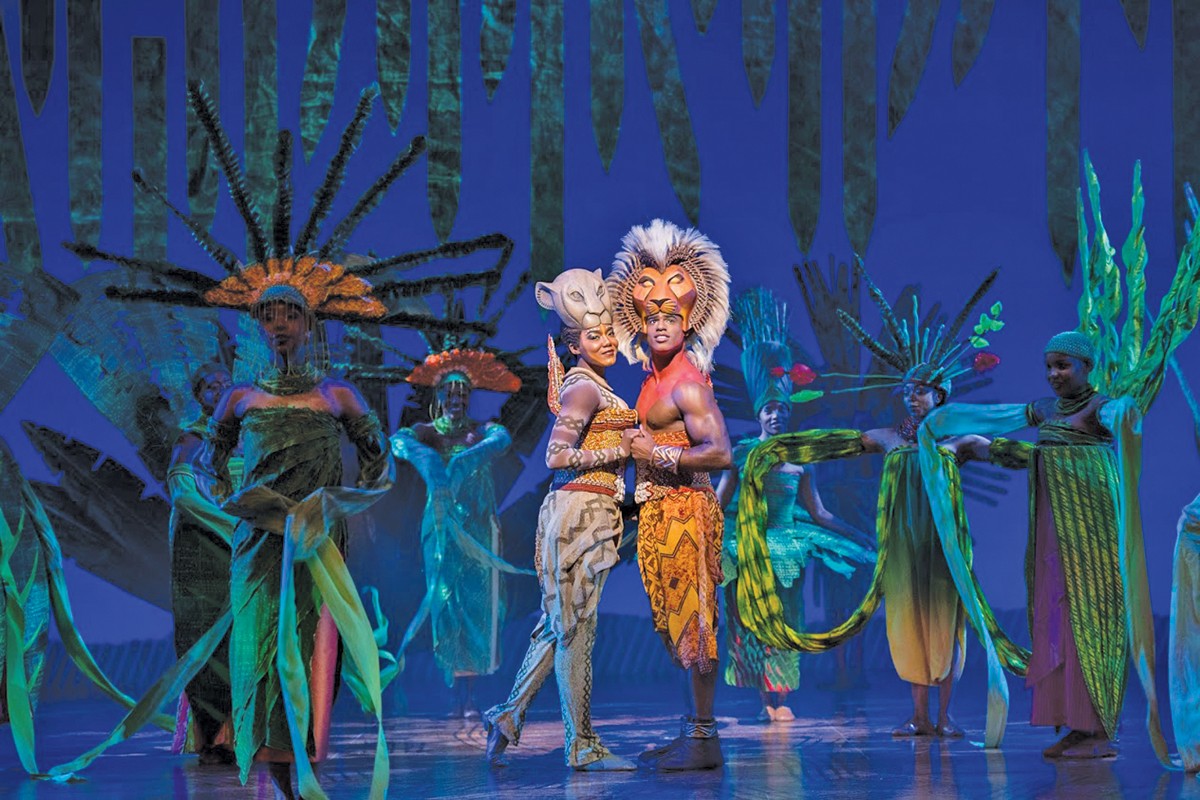 With more than 20 years on tour and on Broadway, multiple Tony awards and the aptly suffixed moniker of "The World's No. 1 Musical," one would be hard pressed to find someone who is oblivious to the beloved Disney classic The Lion King's life on the stage. Playhouse Square once again hosts a production that boasts an incomparable lifespan, and after witnessing it, you'll see why it's held in such high regard.

Trying to summarize a film that has been engrained in the minds of every human being by the age of seven would be a moot point, so let's differentiate the 1994 film from the musical. If you need a refresher, it's Shakespeare's MacBeth substituted with animals from the African savanna.

Roger Allers' and Irene Mecchi's stage adaptation deviates just enough from the original film to give the play some separation from its counterpart. Songs are added— many by the legendary Elton John and Tim Rice— as well as certain scenes to ensure the main narrative anchors are more well-rounded, all for solidifying the message of the "Circle of Life," which itself is The Lion King's signature musical number. Conductor James Dodgson and his orchestra supply the songs with an exhilarating enthusiasm and brightness thanks to the inclusion of African drums, chimes and percussion.

Director and costume designer Julie Taymor, in many ways, has made decisions that give the play its own identity, such as swapping the gender of Rafiki (Buyi Zama) to supply the story with a female lead, and crafting the prototype masks still used in the production. It affirms there are few who've committed themselves more fully to a production feeling special, inside and out.

The roster has changed dramatically since its initial run, but the touring cast feels to have made these characters their own. Zama in many instances steals the show with her unabashed chants and infectious cheerfulness. Her voice rings through the theatre in numbers such as "He Lives In You" and with Nia Holloway as Nala in "Shadowland."

As Scar, Spencer Plachy feels tailor-made for the role, with a cunning sneer and a bittersweet cadence in his voice. His wit is often at his sharpest when paired with Mufasa (Gerald Ramsey) — who is equally poised and comical with a lovely timbre— and Zazu (Greg Jackson), whose comic timing is only matched by his puppetry. The hyenas (Martina Sykes, Keith Bennett & Robbie Swift) also get a rise out of Jackson's Zazu with many of the improvised moments injected into the script.

Aside from Jackson, Timon (Nick Cordileone) is often slotted as the comic relief, for which he excels in spades, with a nasally whine that caricatures Joe Pesci. He's paired with Pumbaa (William John Austin), who as a standby in the lineup feels completely natural as the happy-go-lucky warthog.

The child performers — Richard A. Phillips Jr. as young Simba and Brilyn Johnston as young Nala — show a lot of heart, even if their voices don't always carry as well as those of the adult performers. Phillips' bravado, however, matches his counterpart Jared Dixon (adult Simba). The same goes for his agility and winning smile. Meanwhile, Dixon's voice is pitch-perfect in numbers such as "Endless Night."

For those who have seen this play before, it may come into question whether it still warrants your attention. After all, with the live action remake still lingering in theaters and a resurgence in its relevance in pop culture, The Lion King is everywhere. We can confidently answer that the production still manages to amaze.

It's a production that feels timeless in its beautifully weaved, cyclical storytelling mixed with tightly choreographed dance numbers, shadow puppetry, ostentatious costumes and sets that are extravagant in every sense of the word, thanks to scenic designer Richard Hudson. However, the show still finds ways to stay fresh with the energy of those who tour with the show, proving it's the little things that give a production such as this that extra wow factor.

Once the curtain rises, the painstaking detail is immediately apparent in every prop and costume by Taymor, mask and puppet co-designer Michael Curry and hair and makeup designer Michael Ward. Theatregoers will likely find their eyes shifting across the stage, noticing something new in every scene. In particular, the cheetah suit (piloted by Sasha Caicedo) and giraffe costume on stilts (Courtney Thomas) never cease to astound in their craftsmanship. Sit in the right area and you'll see characters walking down the aisles, where you can really grasp the artistry of these pieces.

Combined with what can scarcely be articulated as anything other than 'Disney magic,' the show meshes the intimacy of going to the theatre with child-like wonder and mesmerizing visuals that stick with you for a long time after getting up out of your seat.

One minor gripe may be the use of dual dance/fight choreography in its more climatic scenes, which is rarely performed by any company without feeling clunky. The production addresses this by only showcasing it in brief snippets. Additionally, while nothing structurally feels out of place, the first act feels a bit bloated with much more content and story than the second.

Slight complaints aside, even the most critical minds are taken aback and left speechless with The Lion King. If you've never experienced something like this before, missing out would be very disappointing. And we ain't lion.