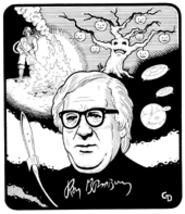 Gary Dumm
Somewhere in Sri Lanka, Arthur C. Clarke must be pondering whether 2010 truly will be the year we make contact, while George Orwell can continue to rest in peace, knowing his vision of 1984 did not come to pass. On the other hand, Ray Bradbury is a tad perturbed that some form of the future he envisioned in Fahrenheit 451 -- a world in which books are destroyed, in order to maintain a happy but uneducated status quo -- has indeed caught up with us. This is the point Bradbury will make when he speaks on "The Great Years Ahead" in Akron Thursday night.

"We're not talking about censorship here," the 79-year-old author explains. "The government didn't do this; the schools have done it by being sloppy and lazy and not caring. We have too many kids reaching the eighth grade and then going to high school or college unable to read or write. Well, you've got a moronic civilization then, don't you? You don't need a government looking over you if you're a moron. If you come out of school with no education, you don't need censorship. You've killed yourself. Your teachers have killed you by neglect."

Certainly, an illiterate society would have little need for censorship, since the written word would not exist. And Guy Montag, the hero "fireman" of Bradbury's 1953 masterpiece, would have no cause to save books if he didn't know words from chicken scratches in dust. But Bradbury does not blame educators alone.

"Fahrenheit is here because the local television news scene in the United States is reprehensible," he elaborates. "They don't present news; they present murders, rapes, and funerals. It's shocking, it's stupid, it's non-creative, it's moronic, and it's destructive. So if you have that sort of element surrounding you, you've got to believe that our culture is not worth saving. And if you do that, after a while, people -- even in a successful society -- begin to doubt themselves."

In other words, we begin to censor ourselves, without the need for government intervention. We try to make the world a better place by foolproofing it so that everyone can be happy and safe, and so that nothing is offensive to anyone else in the least way. Or, as Captain Beatty explains in Fahrenheit 451: "It didn't come from the Government down. There was no dictum, no declaration, no censorship, to start with, no! Technology, mass exploitation, and minority pressure carried the trick, thank God."

So how, exactly, is this the foundation for the "Great Years Ahead?" "I mention all these things, but then I'm giving you solutions," Bradbury says. "You do the educational system over and, in one year, can begin to put out students who are intelligent: who can read, who can write, who can think -- that's the answer. I'm a complete library person who worries about the destruction of libraries through ignorance. Not by book-burning, but by neglect."

The greatest irony of all may be that, despite the shortcomings of the educational system, Fahrenheit 451 has become a staple of U.S. literature, foisted upon unsuspecting students. But that's just another part of the problem.

"That's the trouble with the schools, a lot of them," Bradbury explains. "They're forcing people to read stuff they shouldn't be reading. You've got to give [students] a list of all kinds of reading, according to their age. You've got to be careful and let people come to you."

Being a literary icon has helped people come to Bradbury, of course, but he doesn't let his near-legendary status go to his head. "I only know that I'm Ray Bradbury when I step out on the stage and they begin to applaud. The rest of the time, I'm just getting my work done. I have a lot of books to finish."

And we have a lot of catching up to do.