The Most Versatile Actors in Cleveland? These Four are Certainly in the Running

With all the showbiz awards floating around these days, there is oddly no Meryl Streep Award for the most versatile actors. This seems strange, since one of the hallmarks of a talented thespian is the ability to take on widely different roles and deliver each with credibility.

In order to correct this oversight, I hereby nominate the following four local actors for versatility that goes above and beyond the call of duty. But first, I must note that actors generally detest talking about acting, believing that doing so well somehow damage the magic that happens when they hit the stage. Still, I persevered and found these performers to be open and honest about their processes.

Here, then, are the Four Most Versatile Actors in Cleveland: 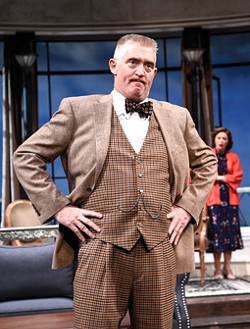 Now in his 13th season at Great Lakes Theater, David Anthony Smith has had the opportunity to crawl inside a multitude of different characters. As he remembers, "I played the brother in Arsenic and Old Lace who thinks he's Teddy Roosevelt. That was a tricky one, since I didn't want it to become a caricature. This person had to be larger than life, yet still sympathetic. It was an interesting balancing act."

For Smith, it's vital to keep the truth of the characters he plays, even when they verge on the extreme. In last season's mystery And Then There Were None, he portrayed William Blore, a gruff and corrupt former British cop who is working as a private detective. In the play, Blore has gone undercover and is affecting a South African accent. That was a double whammy for Smith to tackle: "First I had to get Blore's British accent right, and then try to figure out how he would fake a South African accent. From that standpoint, it was probably my most challenging role."

When it comes to crafting a character, Smith doesn't start with the words. "I like to determine what the character looks like: What's his hair like and how does he move? Is he fit or out of shape? How does he speak, in clipped phrases or is he relaxed and gregarious?" All these elements lead Smith to the discovery of the character as a whole.

Even though he's played many roles, there are some characters out there that he'd like to try. "I'd love to play Cyrano de Bergerac, since he carries himself with such panache. And in the works of Shakespeare, I want to try my hand at King Lear and Macbeth. The great thing about playing Shakespearian roles is that they're so much smarter than me. The language is wonderful."

Of course, Smith always enjoys his recurring role as the towering ghost of Christmas Present in GLT's annual production of A Christmas Carol. "Hey, I get to act on stilts! Not every actor can say that."

When it comes to range as an actor, it doesn't get much wider than playing Anne Frank's mother in The Diary of Anne Frank and then playing Nurse Ratched in One Flew Over the Cuckoo's Nest. But Anne McEvoy has done that, along with a ton of other roles at theaters throughout the area. These have included the acid-tongued Violet Weston in August: Osage County and sweet Lily Dale Kidder in The Young Man From Atlanta.

As she explains, "I love trying things I've never done, with the hope I can learn something new. For that reason, I don't like repeating roles. I prefer taking on new challenges and exploring the character for myself." But she does wish she had a more consistent approach to developing her parts. "I tend to flounder a bit at the start of rehearsals, and I'm uncomfortable until I can find my way into a character.

As for her dream role, it's clear: "I would love to play Countess Aurelia in The Madwoman of Chaillot. She's an elderly idealist who seems like an outcast from society. But she comes up with a way to rescue humanity from the clutches of corrupt businesspeople. What a great part!"

As an African-American actor playing Willy Loman in Death of a Salesman, Greg White explored some very new territory. As he says, "The challenge was racial, in part. But also, the character of Willy felt very foreign to me. He didn't understand his kids at all, so out of touch. Because of all of that, I wasn't sure I could do it. But my director said, 'You want the role or not?' So I took it, and I guess it worked."

White's excellent rendition of Willy Loman was preceded by another challenge, playing another white man, the crusty sea captain Kris Kristofferson in Anna Christie. Of course, White has played many black characters as well, including his superb one-person performance as Supreme Court Justice Thurgood Marshall in the play Thurgood. As White recalls, "I loved playing that role, since I could ad lib with late arrivals to the theater, as if they were students in my lecture hall. I like to have fun with the audience."

There is one character out there he'd still like to attempt. "I would be eager to play George in Who's Afraid of Virginia Woolf. I love Edward Albee's script, the way the characters manipulate each other. That would be a treat." 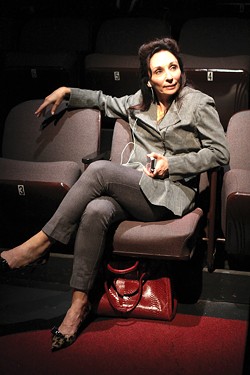 She has been a collapsed, suicidal failure as Jessie in 'night Mother and an overbearing wife as Domina in A Funny Thing Happened On The Way To The Forum. She has been the oh-so-lovely Mother Cleveland in A Christmas Carol and a sarcastic bitch as Diane in The Little Dog Laughed. In short, Laura Perrotta has done it all at many area theaters.

As Perrota says, "Ever since I was 11 years old, growing up in New York and taking the train into the city to see shows, I've been in love with live theater. It's dangerous, there's no turning back. And it's wonderful to be able to create roles that are different from me." Her biggest challenge? "Playing Madame Arkadina in Chekhov's The Seagull. She's a complex woman, and working through the translation to find the reality of the character was an interesting task."

So there you have four immensely versatile actors, all of whom are trodding the boards this year. So go out and see what they've come up with next!