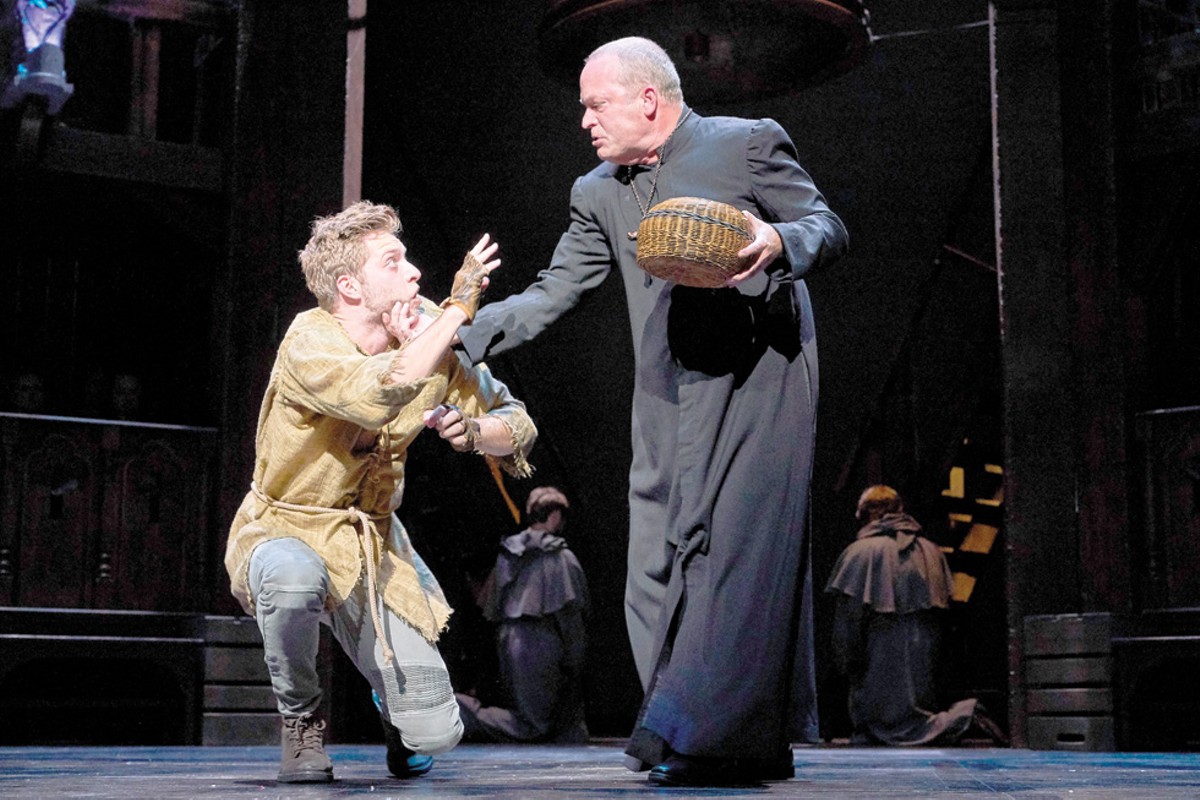 The Hunchback of Notre Dame

We all love a yarn about outcasts who try to surmount enormous obstacles, even if the final goal is doomed to fail. Hell, that's why people still attend Cleveland Browns' games.

With that in mind, Great Lakes Theater presents The Hunchback of Notre Dame, a full scale, balls-to-the-wall theatrical production that tells the story of the recluse bell-ringer with aspirations, made famous in the Victor Hugo novel Notre-Dame de Paris. In the book, that unfortunate fellow named Quasimodo was a horrible apparition, with a huge wart covering one eye and his humpback causing a crumpled posture.

In recent years, thanks to the animated 1996 Disney film that inspired this production, Quasi has gotten a bit better looking. And in this stage version, the transformation of Quasimodo's appearance from puke-in-your-mouth ghastly to sort of boy-band-cute is complete. Gone is the huge wart or any facial deformity, allowing this Quasimodo to better assimilate and become a character who is a mix of The Man of La Mancha, the Beast from Beauty and the Beast, and Rex, the Wonder Dog.

Before we get into the weeds of the material (music by Alan Menken and lyrics by Stephen Schwartz — both Broadway heavyweights —along with a book by Peter Parnell, all based on the Hugo novel with songs from the animated Disney film), let's pause to commend Great Lakes Theater for an outstanding production. It is directed by Victoria Bussert and features exceptional work by the designers: Jeff Herrmann's massive set, Mary Jo Dondlinger's evocative lighting, David Gotwald's enveloping sound, and Martha Bromelmeier's period costumes. They fill the Hanna stage with myriad sensory pleasures.

Add to that an on-stage chorus (the Baldwin Wallace Choral Studies Program under the direction of Marc Weagraff) that contributes substantial vocal heft to many of the songs. This gives the tunes the aural feel of a mini-Mormon Tabernacle Choir and the result, guided by the baton of music director Joel Mercier, is lush indeed.

As for the story, set in 15th century Paris, it is told in an almost embarrassingly simplistic manner. Right from the meta-ish start, when the performer Corey Mach comes out to don his costume with the shoulder hump so he can portray Quasimodo, we are aware we are being told a story. And this format continues as the tale is narrated, storybook-style, by the King of the Gypsies.

Thus, we are led by the hand through the exposition dealing with Quasi's birth to an anonymous gypsy woman and Jehan Frollo, a young man who dies and leaves the infant in the care of his older, cold-hearted brother Dom Claude Frollo, the Archdeacon of the Notre Dame Cathedral. After taking a glance at the ugly baby, Frollo winces and names the child Quasimodo, which means "half-formed," thereby rejecting other options such as Pierre, Enzo or Fred.

Saddled with that self-esteem defeating moniker, the kid grows up to be the captive of Frollo, ringing the bell in the church tower, developing some monster pecs, and never going outside where he will be vilified by a grossed-out populace. That is, until the gargoyles he converses with encourage him to check out a few streets near the cathedral. When he sneaks out, he encounters a young gypsy enchantress named Esmeralda doing a sultry dance, and soon it's not just the bell rope he's yanking.

Trouble is, nasty Frollo is also smitten by Esmeralda, as is stud-muffin Phoebus De Martin, Captain of the Cathedral Guard (picture Gaston from Beauty and the Beast, with slightly less ego). Numerous songs are trotted out to flesh out this quadrangle of passion until the downbeat conclusion.

In the title role, Strongsville native Mach sings with power, particularly in two solos engineered to trigger audience oohs and ahhs. These are "Heaven's Light," in which he expresses his budding feelings for Esmeralda, and the penultimate ditty, "Made of Stone," when he croons with his gargoyle pals prior to his last-second rescue of Esmeralda from being burned at the stake. Mach also adds some chuckles to the proceedings with his off-hand delivery of the easy jokes tucked here and there. But his boyish good looks defy the monstrosity that his character is supposed to look like, no matter how much he tries to contort his face and body.

Mach is more than matched in vocal chops by Keri Rene Fuller as Esmeralda, who almost stops the show with her beautiful rendition of "God Help the Outcasts." As Dom Claude Frollo, Tom Ford channels some of the bile he dredged up from playing the demon barber Sweeney Todd a couple years ago, and he lands the bass notes of his songs with the thump of authority. Also turning in solid performances are Jon Loya as Phoebus, Alex Syiek as the ever-informative King of the Gypsies and, in a neat trick of stage illusion, Dan Hoy as a decapitated Saint Aphrodisius.

Thanks to the sure hand of director Bussert, it all works as a sumptuous theatrical treat. But perhaps due to its cartoon lineage, it lacks the impact of that other musical made from a Hugo novel: Les Miserables.