"He left behind an astounding amount of artwork, much of it never before exhibited.” 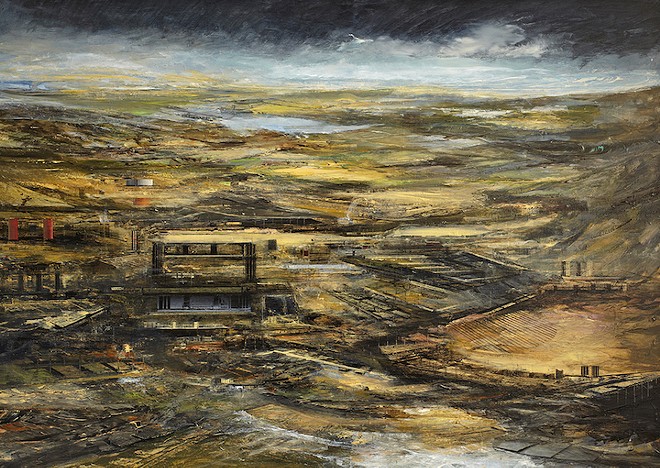 Ten years after his passing in 2012 at the age of 63, Randall Tiedman will be celebrated this Friday with an exhibition at Suite 215 at the 78 Street Studios. The show runs through Dec. 30.

From the artist's biography: “He [was] a highly intuitive self-taught artist. He [was] also a skilled draftsman who spent nearly four years during his early career copying old master paintings to acquire technical proficiency in oils and various graphic media. He typically [worked] on his paintings over a long period of time, beginning with a familiar image, then subjecting it to a series of destructions and reconstructions, which may be metaphorically compared to a process of death and rebirth. After building up the surface with various media, he [marred] and [scraped] it, leaving mysterious presences where objects or forms have been removed – as if to suggest that these rough, pitted surfaces have been 'lived in.' This process, so essential to releasing imagination and subconscious associations, produces deeply felt images of obsessive intensity"

Tiedman worked in a variety of styles ranging from gestural and illustrative, to abstract and globular. Some offer intuitive abstractions while others capture impressionistic, romantic landscapes. Some of his pieces focus on the figurative while others offer what some view as vast post-apocalyptic industrial degradation.

Although some of his works look like they could have been derived from the Cleveland skyline, he said he never used any photographs, preliminary sketches or reference materials in his work.

“I just start splattering paint on the canvas," Tiedman once said in an interview with Creative Compass. “It’s a discovery is what I like about painting. I’m interested in scenic panoramas of my environment. Whether it’s conscious or unconscious, it filters in and it starts to reflect your environment. I find the architecture of the stadiums and the office buildings and the mix of abandoned factories fascinating.”

Many people have called his work apocalyptic due to the dark earth tones and hazy atmosphere, but this was never Tiedman’s intention.

“I don’t try to intellectually make anything I view to look apocalyptic,” explained Tiedman. “I try to bring more romantic sensibility in terms of the coloring. It’s a lyrical affirmation of what I am looking at rather than something negative.”

The piece “Boy Portrait” looks like a dream Francis Bacon had while some of his abstracts like “Flesh, Bone and Spirit” have bold and thick applications much like Van Gogh or Frank Auerbach.

At times he seemed to indulge with a pallet knife to cut through the paint revealing the underpainting like in the piece,“Turangalila,” which resembles an eclipse of mid-flight moths converging on a foggy street lamp. “Dove Descending” reminds me of a historical rendering of the early echoes of an industrial valley.

“My current work reflects the trend of Psychogeography and the Derive,” Tiedman was quoted as saying in New American Paintings in 2009. “This is more by reaction and intention. Psychogeography is the study of geographical settings, consciously managed or not, acting directly on the mood and behavior of the individual. Psychogeometry research is carried through nonscientific methods such as the derive, aimless drifting through the city trying to record emotions given by a particular place and mental mapping; the production of mood based maps. I use no reference material, as the work is done entirely from memory. I want to work to retain a visionary edge. This process of mental mapping is hazy and leaves the creative act to fill in the details. I continually shred and dismantle the images till the painting pulls into focus.”

Tiedman, although he was self-taught, was accepted for an advanced standing at the Cleveland Institute of Art after his tour of duty in Vietnam, but decided to pursue art on his own. He was co-founder of Artist Archives of the Western Reserve and worked for the Cleveland Public library from the 1970s into the early 2000s.

This exhibition is a follow-up to the exhibit curated by Gent and Scheele in 2013 when Gent said that Tiedman had “…left behind an astounding amount of artwork, much of it never before exhibited.”

“Although Tiedman is most well-known for his powerful, apocalyptic industrial landscape paintings, we wanted the public to see the wide variety of work that led up to this point in his artistic career, which consists of figurative, surrealistic and abstract work,” said Gent. “His work will continue to be part of exhibits at 78th Street Studios, HEDGE Gallery and hopefully beyond.”