They Saw It on TV

Wackiness ensues when the Furniture Guys cut up

Send a News Tip
The Furniture Guys At the NARI Home Improvement Show, at the I-X Center, 6200 Riverside Dr. Friday and Saturday, January 28 and 29 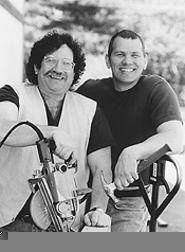 Tooth and nail: Feldman and L'Erario.
Handheld rotating blades can be scary, especially when they're attached to home improvement projects undertaken by amateurs. And it doesn't help that a plethora of TV shows depict knocking down a support wall and inserting a greenhouse as a weekend "do-it-yourself" number. That's where The Furniture Guys, Ed Feldman and Joe L'Erario, the Laurel and Hardy of home improvements, come in.

"We always try to keep the projects lower than other how-to shows," Feldman, once a stand-up comedian and construction worker, says. "If you ruin a chest of drawers, no problem. If you ruin your window, you've got a draft."

The Furniture Guys' appearance at this weekend's NARI Home Improvement Show at the I-X Center will embody this observation -- demonstrating tips such as using Drano to finish cherry wood or vinegar and rust to stain cedar, as well as their unique brand of tool-based comedy -- instead of the usual home remodeling jobs.

"Gee whiz, if you're coming to a home show, I figure you know how to put in a storm window," Feldman points out. "And there'll probably be storm window guys there showing you. But what there won't be are furniture guys showing you how to create a finish out of household chemicals."

The Furniture Guys met in 1979 on a construction site where they built houses "from the ground up," but soon left to pursue their own interests. After teaching a night school class on furniture repair -- with woodwork refinisher L'Erario as a guest lecturer -- Feldman realized the class would translate well to TV. Furniture to Go was born, airing on the Learning Channel from 1992 to '97, when they launched their new show, Men in Toolbelts.

"The Learning Channel said, "We've done furniture for a while; what would you like to do?'" Feldman explains. "We told them we wanted to have a variety show with lots of dancing girls, but they said, "How about fixing houses?' and we said all right."

After all, the chance for jokes multiplies exponentially when you expand your subject matter beyond tables and chairs. But even with the introduction of more complex jobs, the pair haven't abandoned their emphasis on how-to projects that average people can do, which is why Feldman promises their next TV gig will be more like their traveling stage show and more like Furniture to Go -- concentrating on furniture and collectibles.

"How many people have their grandmother's chest in the basement, and they have no idea what to do with it?" he wonders. "No one teaches that sort of stuff on television. Everyone teaches you how to put on a nine-level deck with a Ferris wheel and a petting zoo."

The live projects have been "specifically designed for home show consumption" by Feldman and L'Erario, and stick to things like creating faux-marble finishes and spilling Drano on a tabletop to create a weathered look. Marbling is their most popular bit, but they have other tricks up their sleeves -- complete with audience participation, depending on what they think the crowd wants to see.

"We try and combine all of our various interests in our fabulous live stage show," Feldman says, sounding like a true showman. "You can't wait for the paint to dry. Although we probably could. Our show is about paint drying, which trumps even Seinfeld's show about nothing -- it's about less than nothing."

Of course, it's not easy to crack jokes over paint drying. "That's true," Feldman agrees. "I've told people there are certainly better craftspeople than we are, and there are funnier people than we are, but nobody can seem to do it at the same time. And we spread gossip about the other how-to hosts, since we know all the dirt about them."

Just try not laugh when you're holding a belt sander. -- Powers