This Is Their Year 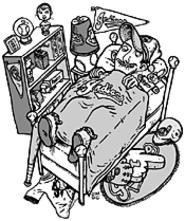 Jim Campbell
This could be the year the Indians go all the way, Clay Benjamin says.

Of course, he's been saying that for each of the past 40 years. The Medina resident is, to say the least, preoccupied with all things Tribe.

In 1990, Benjamin won a contest held by WMMS to find Cleveland's most obsessive baseball fan. His prize? A trip to Cleveland Indians fantasy camp, to play ball and mingle with Tribe semi-greats of seasons past. It's an experience he has repeated several times since.

Benjamin has Tribe jackets, shirts, shorts, hats, stickers, pennants, a Chief Wahoo yard sign, and even a Tribe bird feeder in his yard. And as the Indians prepare for their first homestand of the season -- beginning April 8, against the Minnesota Twins -- Benjamin's optimism is soaring to predictably high levels again. But why this year?

"The pitching staff is going to be a lot better than anyone thinks," he says, reporting from Winter Haven, Florida, where he scouted the Tribe's preseason. "[Chuck] Finley is unhittable. And [Bartolo] Colon and [C.C.] Sabathia are going to dominate. I'll take these guys as a one-two in the rotation over any other team, except for maybe Arizona."

With the departure of second baseman Roberto Alomar and right fielder Juan Gonzalez, most analysts are writing off this year's edition of the Tribe. Not Benjamin. "The outfield is going to be OK," he says. "I saw Brady Anderson make some great catches in left. Milton Bradley is an up-and-comer in center, and Matt Lawton in right is going to be one of the team leaders."

But it doesn't take long for the pundit in Benjamin to give way to his inner fanboy. He recently added a Bob Feller bobble-head to his universe of collectibles. "I even got him to sign it," he explains. "He's down here, too. He's going to be 84 this year, and he looks great."