This Season's Not Canceled 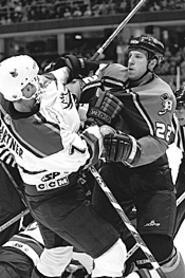 Whether you blame the owners or players, the NHL season is kaput. At the American Hockey League, however, things are just getting cool. This weekend, the Barons will meet the Syracuse Crunch twice. And in honor of the canceled NHL season, $21 tickets for both games are just $5 for fans wearing NHL apparel. And it's not just cheap hockey; it's good hockey.

With four teams -- the Barons, Crunch, Hamilton Bulldogs, and Edmonton Road Runners -- fighting for the last playoff spot in the North Division, the games are effectively playoff hockey. Still bummed about the NHL? Don't be: Hockey's better live. The puck drops at 7 p.m. Friday and Saturday at Gund Arena, 100 Gateway Plaza. Tickets are $5 to $25; call 216-420-0000. -- D.X. Ferris

Head of the Class
The Cavs are handing out LeBron bobbles again.

You don't have to line up early for the LeBron James Mini Bobble Head giveaway happening at the Cavs' game against the Los Angeles Clippers on Tuesday. Every fan will go home with one. But some fans are angling for more. "Just show up and get it early," advises Dean Williams, who claims to own the town's largest bobble-head collection. "And then try and pick up a few from people who don't really care about them." Yet Williams doesn't intend to hold onto all his acquisitions. "Ideally, I like to try and get four or five at a game," he explains, "and then get home by half time to start putting them up for sale [on eBay] before anyone else." Tip-off time is 7 p.m. at Gund Arena, 100 Gateway Plaza. Tickets are $10 to $120; call 216-241-5555. -- Steve Albanese

Friday-night Dodgeball League starts this week at the Sports Dome, and you can bet that the spirit of Patches O'Houlihan will be there to remind players of the five elements of the game: dodge, duck, dip, dive, and dodge. Sports Dome co-owner Bev Thompson says that the success of last year's Dodgeball: A True Underdog Story was part of her incentive to form the league. "We also needed to fill our spring schedule," she admits. "And we had a few people interested in this." Games start at 8 p.m. at the Sports Dome, 6060 West Canal Road in Valley View. It's free to watch, $20 to play; call 216-447-7878. -- Matt Leavitt