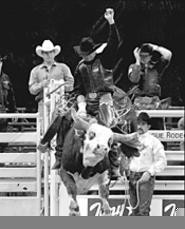 The rodeo horns in on Gund Arena this weekend (see Saturday).
Thursday, February 20

"I never wanted to be a flight attendant," admits Elliott Hester, whose Plane Insanity: A Flight Attendant's Tales of Sex, Rage, and Queasiness at 30,000 Feet chronicles his 16 years as (you guessed it) a flight attendant. As "an in-flight bartender/referee/therapist," Hester's pretty much seen it all: folks freaking out, puking on each other, having sex. And as a former columnist for Salon.com and a syndicated travel writer, he's written about a lot of it. Plane Insanity brings "the flight[s] from hell" together. "Human behavior is rarely more incomprehensible than when witnessed on an airplane at 30,000 feet," he says. Hester shares stories and signs copies of Plane Insanity at 7 tonight at Joseph-Beth Booksellers, 13217 Shaker Square. Admission is free; call 216-751-3300.

Lakeland Community College's 31st annual Jazz Festival commences tonight, and this year's theme -- "Basie . . . and the Blues" -- honors the great Count Basie. The fest includes several shows, starting at seven tonight with a performance of Len Orcino's "Impacto Nuevo" by Lakeland Community College's Jazz Impact and culminating with Saturday night's "A Tribute to Count Basie" by the Cleveland Jazz Orchestra. In between, high school bands and local jazz ensembles riff it up. Tickets for tonight's gig are $3 and $7; tomorrow night's Collegiate Jazz Showcase Concert ranges from $9 to $15, and Saturday's show costs $11 to $17. Tickets and more info are available by calling 440-953-7261. All performances take place at Lakeland Community College, 7700 Clocktower Drive in Kirtland.

We're very impressed by ice sculptors who carve swans out of frozen water. So imagine our awe when we heard that Aaron Costic would be fashioning the Eiffel Tower out of a chunk of the cold stuff at Chagrin Falls' Festival of Ice. Not only that, Costic and his squad are also planning ice sculptures of Cinderella, an eagle, a palm tree, and a teapot, among other things, according to Ann Washington at the Chagrin Valley Chamber of Commerce. Festivities begin at 10 a.m. today and tomorrow (and last till about 6 p.m.), though Costic's handiwork has an open-ended run. "As long as the weather's cold, they'll be there," says Washington. It takes place at Riverside Park on North Main Street in Chagrin Falls. Admission is free. Call 440-247-6607 for more information.

You know you've got one tough lady on your hands when she can boast that both her mother and grandmother were horse-bucking and bull-riding champions. And Tavia Stevenson, one of two women joining the testosterone-heavy World's Toughest Rodeo as a bull rider this year, is tough. She's been a rodeo regular since age 14 -- which kinda figures, since by that time, Mom was cooking up more Bareback Championship titles than Hamburger Helper. Stevenson and crew (along with country crooner Darryl Worley) are in town this weekend, doing a whole bunch of crazy stuff with really heavy animals. The World's Toughest Rodeo is at Gund Arena (100 Gateway Plaza) at 7:30 tonight and 2 p.m. tomorrow. Tickets range from $8 to $22, available by calling 216-241-2121.

Don Pasquale sounds like someone Michael Corleone knocked off at the end of The Godfather, or maybe a midpriced wine we'd serve with baked ziti. But it's actually a 200-year-old opera written in eight days by Gaetano Donizetti. Cleveland Opera's production, concluding its three-day run with a matinee today, retains the original Italian libretto, as well as the comedy at the center of the tale of a rich old bachelor, his starry-eyed nephew, and their romantic travails. Don Pasquale is at the State Theatre (1519 Euclid Avenue) at 2 p.m. Tickets range from $22 to $101, available by calling 216-241-6000.

Wondering what Toad the Wet Sprocket's been up to since its modern rock hit "Fall Down" nine years ago? Well, it released a couple more albums that weren't so well received and ended up calling it quits at the end of the '90s. Singer Glen Phillips's solo career hasn't taken off as planned, so the quartet is back on the road, bringing its jangly, post-R.E.M. pop-rock to the masses. Expect all the radio hits ("All I Want," "Walk on the Ocean," "Something's Always Wrong"), as well as some songs from Phillips's 2001 solo disc. Singer-songwriter Bleu, who made his major-label debut on the Spider-Man soundtrack, opens the show at 8 p.m. at the Odeon, 1295 Old River Road in the Flats. Tickets are $20 and $23; call 216-241-5555.

Dr. Jekyll and Mr. Hyde offers two thespian workouts for the price of one. Robert Louis Stevenson's morality tale pits good against evil, id against ego, in a story that never fails to fascinate. Its success, though, ultimately rests on the staging (the melodramatic material can easily slip into caricature -- it's an easy show to screw up). Local fave Andrew May plays the terrible twosome, and Cleveland Play House artistic director Peter Hackett directs, so this production (which runs through April 6) is in good hands. It's at the Play House's Bolton Theatre, at 8500 Euclid Avenue. Show times are 8 p.m. Tuesday through Friday, 4 and 8 p.m. Saturday, and 2 p.m. Sunday. Tickets are $12 to $47.50; call 216-795-7000.