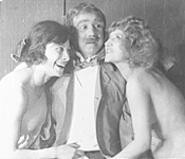 The big news is that the Professional Women's Bowling Association's Regional Pro-Am is in town this weekend. The bigger news is that folks have a chance to go head-to-head for 10 frames against many of the area's top female bowlers. And it's not just the honor of sharing lane space with title-holder Jackie Mitskavich that's up for grabs here: There's $1,000 at stake, as well as a $250 scholarship for teens and shiny trophies for youngsters. It all takes place at 7 tonight and 7:30 p.m. tomorrow at AMF Riviera Lanes (20 South Miller Road in Fairlawn). Entry fee is $40, $20 for kids (add an extra $100, if you wanna take home an Ebonite ball). Registration is required. The pros go at it at 9 a.m. and 2 p.m. tomorrow, and 9 a.m. and 4:30 p.m. Sunday; call 330-836-7985 for more information.

The Monstrous Ego Theatre Company premieres tonight with Sophocles's classic tragedy, Antigone. If it sounds like a heady production for a new acting troupe to tackle, consider that Monstrous Ego is run by 18-year-old Zev Valancy, Antigone is co-directed by him, and the company he founded is made up of students and recent graduates of Cleveland Heights High School. "I didn't have anything else to do this summer," Valancy says. "It's low-tech students putting together serious theater. We didn't want to do the summer-stock, frivolous stuff that you usually see in the summer." Antigone is at Dobama Theatre (1846 Coventry Road in Cleveland Heights) at 8 tonight and tomorrow, and at 2:30 p.m. Sunday. A $5 donation is suggested. Call 216-932-6838 for more information.

The organizers behind this weekend's International Gem and Jewelry Show are hush-hush about exactly what will be included in its Fabulous Jewelry of the Stars exhibit. Cher's bracelets and Marilyn Monroe's earrings are among the goodies in the exhibition's inventory, but we could end up with Dudley Moore's cufflinks or Loretta Swit's rhinestone pin. Either way, the show offers one of the country's largest selections of fine and costume jewelry -- and many of the celebrity items are for sale too. Free jewelry cleaning is also available. The International Gem and Jewelry Show takes place from 10 a.m. to 6 p.m. today and 11 a.m. to 5 p.m. tomorrow at the I-X Center (6200 Riverside Drive). Admission is $6; call 216-676-6000.

The Boston Pops Esplanade Orchestra's Baby Boomer Bash combines everything from the Beatles, Carole King, and Leonard Bernstein to the theme from Green Acres, "Gonna Fly Now (Theme From Rocky)," and Bugs Bunny (via Wagner's "The Ride of the Valkyries"). "The Pops has always prided itself on being able to play the widest spectrum of music," explains Boston Pops music director Keith Lockhart. "It's liberating to open the musical boundaries that way." The New York Voices lend their pipes to the mix and lead the audience in a sing-along, making this the most playful performance at this year's Blossom Festival. "It's fun for the audience and the orchestra to celebrate the things we have in common, especially the cultural influences," Lockhart says. "It's an opportunity to go on a hopefully not-too-scary nostalgia trip." The Boston Pops Esplanade Orchestra's Baby Boomer Bash starts at 7 p.m. at Blossom Music Center (1145 West Steels Corners Road in Cuyahoga Falls). Tickets range from $22 to $50. They are available by calling 216-231-1111.

Fair season is upon us. And the Lorain County Fair has lined up an impressive roster of performers: Country crooners Brad Paisley, SheDaisy, and Neal McCoy headline the annual gathering of cows, bunnies, guinea pigs, and giant tomatoes. There's also a stunt show, tractor pull, motocross race, and demolition derby happening. It all goes down through Sunday, August 24, at the fairgrounds (23000 Fairgrounds Road in Wellington). Hours are 8 a.m. to 10 p.m. tonight through Saturday, August 23, and 7:30 a.m. to 9 p.m. Sunday, August 24. General admission is $3; tickets for entertainment programs range from $6 to $22. Call 440-647-2781 for more information and a complete schedule.

In case you missed Monday's breaking news, fair season is upon us. And while the Portage County Randolph Fair doesn't have any knockout performers (Canadian country group Emerson Drive is the only big name), it still boasts a resplendent array of the traditional fair stuff: animal shows, vendors, arts and crafts displays, and kids' activities. The only quibble: Why must the Junior Fair Swine Showmanship take place at the very same time as the Open Class Dairy Judging? The Portage County Randolph Fair runs from 7 a.m. to 11 p.m. through Sunday, August 24, at the fairgrounds (4215 Fairground Road in Randolph). Admission ranges from $1 to $3. Call 330-325-7476 for more information.