Send a News Tip
Against the Ropes 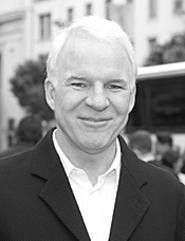 Getty Images
Steve Martin: The wild and crazy guy had a hand in the Play House production The Underpants (Thursday).
Thursday, March 4

Don't blame Jackass and Eurotrip for the decline of Western civilization. Fart jokes and bawdy humor were just as prevalent 100 years ago, when Carl Sternheim wrote a play sparked by an accidental glimpse of lingerie. A couple of years ago, funnyman Steve Martin updated the work as The Underpants. "It's a great match of adapter to material," says Peter Hackett, director of the Cleveland Play House production. A gal's bloomers inadvertently fall down at a small-town parade; soon after, the apartment she's long been trying to rent becomes the village's hot spot -- particularly among local guys. "It's difficult keeping a straight face when you do this," Hackett says. "But comedy is a very serious business. We have to play it seriously." As playwright Martin himself once said, comedy is not pretty. The Underpants is at the Play House's Drury Theatre (8500 Euclid Avenue) through March 28. Show times are 8 p.m. Tuesday through Friday, 4 and 8 p.m. Saturday, and 2 p.m. Sunday. Tickets range from $32 to $47.50. They are available by calling 216-795-7000.

The coup that rocked Venezuela on April 11, 2002, was played out between warring television stations: the government-sanctioned network and the one operated independently of the state. And the filmmakers behind the documentary The Revolution Will Not Be Televised scored a coup of their own: They initially set out to profile President Hugo Chavez. What they got instead were dead bodies, shifty military maneuvering, and an engaging political drama unfolding in front of their cameras. Chavez is portrayed as a charming, endearing man of the people. His opponents -- Venezuelan businessmen who crave the fiscal benefits of the nation's large oil reserves -- see him as a Marxist revolutionary. That the United States was probably involved in the bloody events leading up to the coup -- which resulted in an interim government that was swiftly removed by Chavez's loyal army -- makes this film another damning indictment of our country's often reckless intervention. The Revolution Will Not Be Televised screens at the Cleveland Cinematheque (11141 East Boulevard) at 9:05 tonight and 8:25 p.m. tomorrow. Admission is $8 ($5 for members). Call 216-421-7450 for more information.

St. Patrick's Day doesn't hit for another 11 days. But it's never too early to break out the green, tap the keg, and dance a jig or two to some fine Irish tunes. Helpfully, today's Songs of Ireland gets the Gaelic groove on with the Ohara Dancers, the Ceili Band, That Irish Band, Fergie & the Bog Dogs, the Irish Rodeo Clowns, and world-champion dancer Tim Seeman, among others. Latha math dhuibh! The choruses begin at 2 and 8 p.m. at the Akron Civic Theatre, 182 South Main Street in Akron. Tickets are $16 (for the afternoon show) and $20 (for the evening performance), available by calling 330-945-9400. For more Irish-themed festivities, see our complete St. Patrick's Day listings.

The PBS special that aired a couple of months back proves that Dennis DeYoung still breaks out "Mr. Roboto" during concerts. The former Styx singer has been hitting select cities and using their orchestras for kickin'-ass-with-strings versions of hits like "Come Sail Away," "The Best of Times," and "Lady." The Cleveland Pops Orchestra joins DeYoung onstage tonight for some Broadway faves, Styx tunes, and something called "Black Wall" -- "a tribute to the men and women who continue to serve our nation." That's all fine and dandy, but it's that little homage to a heroic robot man with a vocoder that will have you rockin' in paradise. DeYoung is at the State Theatre (1519 Euclid Avenue) at 8. Tickets range from $26 to $56, available by calling 216-241-6000.

You say you got two left feet? You look like Julia Stiles in Save the Last Dance whenever you try to bust a move? No problem. At the Sunday Night Dance Party, you get a free lesson in retro moves . . . which oughta prepare you for the swingin' sounds of Swingster, who'll perform a couple sets of rockabilly and swing tunes. It starts at 7 p.m. at Rockers Café at Razzles, 27128 Bagley Road in Olmsted Township. Admission is free; call 440-235-3663.

The only thing better than a game of pool at a bar is a free game of pool at a bar. The Sly Fox has free pool all night long. Which leaves plenty of cash left for life's other great pleasures, most of which you can order at the bar. Rack 'em up every Monday at the Sly Fox, 4755 Great Northern Boulevard in North Olmsted; call 440-777-0961.

The Rose in Medina sure has gotten ambitious: With a major renovation completed only a few months ago, the historic theater returned to business by booking concerts and showing movies on its two screens. Then came a bar, and an art gallery is in the works for spring. It's also just kicked off a weekly night of funny stuff: Stand-up comedy starts with an open mic (just send an e-mail to [email protected] to secure five minutes of stage time), followed by a trio of local professionals. The laughs start tonight at 8 p.m. at the Rose, 139 West Liberty Street in Medina. Admission is $5. Call 330-722-4448 for more info.

The Museum of Contemporary Art's Curve Series features work that busts out of traditional brush-and-canvas settings. And since MOCA's exhibitions are among the city's most daring anyway, Curve's displays are always progressive and just a little abstruse. The newest installation, by Los Angeles-based Kori Newkirk, includes a string of plastic pony beads (those hair ornaments favored by African-American women) arranged to symbolize the 1992 L.A. riots. It's socially alert, passionate, and smart. It's on view through May 23 at MOCA, 8501 Carnegie Avenue. It's open 11 a.m. to 6 p.m. Tuesday though Sunday. Admission is $3 and $4. For more information, call 216-421-8671.