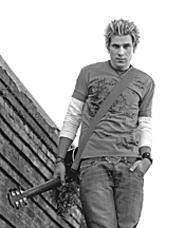 But the little girls understand . . . Ryan Cabrera is at the Odeon Thursday.
Thursday, November 4

Girls really dig Ryan Cabrera. And it's not just any girls that dig him. It's the crucial teen and 'tween set -- the group that went to see Titanic a gazillion times and made it the biggest movie ever. The group that's logged countless phone hours voting for its favorite American Idol. And the group that can make or break a virtual unknown like Cabrera. An opening spot on Jessica Simpson's tour and plenty of MTV airtime have helped bolster the 21-year-old's career. His debut album, Take It All Away, was produced by the Goo Goo Dolls' John Rzeznik, who piles on the Goo-tested formula of radio-friendly riffs, spiked with a little turmoil. Cabrera is at the Odeon (1295 Old River Road) at 8 p.m. Tickets are $20, available by calling 216-241-5555.

The four artists that make up Affirmations, Apparitions, Diaries, and Dreams, opening today at Headfooters, don't have much in common (one's a member of the New York Bar Association, another is a suburban mom). But all are self-taught, and all create work that teeters between childlike simplicity and mind-massaging insight. The exhibit is up through December 31 at Headfooters Outsider Art Gallery, 12610 Larchmere Boulevard. It's open from 11 a.m. to 5 p.m. Tuesday through Friday and 11 a.m. to 6 p.m. Saturday. Admission is free; call 216-795-1668.

Sing-A-Long Sound of Music isn't quite as gay as those midnight screenings of The Rocky Horror Picture Show, but it's pretty damn close. Folks dress up like nuns, schoolgirls, and Nazis and watch the Oscar-winning 1965 film about the von Trapp family while crooning show tunes. Pretty damn gay. But it sure beats donning fishnets, a garter belt, and eyeliner for Rocky Horror, which isn't nearly as good a movie as Music. The aisles of the Akron Civic Theatre (182 South Main Street in Akron) come alive at 8 tonight and 2 and 8 p.m. tomorrow. Tickets are $19.50; call 330-253-2488.

New York-based choreographer Ronald K. Brown uses something called "kinetic storytelling" in his pieces. Translation: interpretive dance woven into a tenuous narrative concept. It may not always make sense, but the moves can be pretty spectacular. Brown and his company, Evidence, make their Cleveland debut tonight, performing three works, including "Come Ye," which is inspired by Nina Simone. Show time is 8 p.m. at the Ohio Theatre, 1519 Euclid Avenue. Tickets are $15 to $35, available by calling 216-241-6000.

On The Music or the Misery, Last of the Famous -- a new group featuring punk refugees who did time in Youth of Today, Shelter, Saves the Day, Gorilla Biscuits, Judge, Give Up the Ghost, and Piebald, among others -- injects modern-day pop vernacular into old-school hardcore riffs. The result is something a little tougher than your average TRL spin. But the foursome also keeps the songs a priority, so while there may be ire brewing beneath the surface, the tunes are as polished -- and almost as catchy -- as an Avril Lavigne track. Last of the Famous is at the Agora Ballroom (5000 Euclid Avenue) at 7 p.m. with Strung Out, Love Is Red, and Saosin. Tickets are $13, available by calling 216-241-5555.

Paul Kochanowski is a sculptor. He's also a sous chef at a Cincinnati country club. There's a link between the two, he says, and it has nothing to do with molding national landmarks out of mashed potatoes. "I'm surrounded by inequalities every day," says Kochanowski, whose Inanimate: Observations, Lectures, and Labors is at the Sculpture Center. "And I'm fascinated by the different levels of labor that [occur] before something gets to the shelf. Who's the guy who drove the truck that brought the boxes? Who's the farmer who hired the workers to pick the produce?" Working with discarded and overlooked objects -- like a milk crate that's been cast in bronze -- Kochanowski explores industrial manufacturing while prodding contemporary class differences. "My work is based on the idea of individual labor vs. mass production," he states. "I draw attention to things that are usually overlooked. And I try to elevate [everyday] things to a higher level of interest." Inanimate is at the Sculpture Center (1834 East 123rd Street) through December 3. It's open from 10 a.m. to 4 p.m. Monday through Friday and noon to 4 p.m. Saturday. Admission is free. Call 216-229-6527 for more info.

There's beauty in the river that was once so polluted, it burned. In Smoke, Mist, and Mirror: The Cuyahoga Valley in the Artist's Imagination, local painters, photographers, and sculptors find inspiration in the crooked Cuyahoga. The exhibit doubles as a history lesson: Natural and man-made changes in the region are documented through a series of prints, drawings, and photos that capture the splendor (and bleakness) of the river in all its raging glory. Smoke, Mist, and Mirror is on view through January 2 at the Cleveland Artists Foundation in the Beck Center for the Arts, 17801 Detroit Avenue in Lakewood. It's open 1 to 5 p.m. Tuesday through Saturday. Admission is free; call 216-227-9507.

Madeleine Albright was the first female Secretary of State. More impressive, she used the word "dissed" on CNN, once worked a Xena: Warrior Princess reference into a speech, and good-naturedly appeared on Saturday Night Live. The Prague-born Albright has a long list of achievements -- including co-founding the nonprofit Center for National Policy and serving as the U.S. ambassador to the United Nations -- leading up to her historical appointment by Bill Clinton in 1996. These days, Albright spends a lot of time "dissing" the Bush administration and discussing foreign policy on news shows and college campuses. She talks about being the most powerful woman the U.S. government has ever produced (among other things) at 7:30 p.m. at E.J. Thomas Hall, 198 Hill Street in Akron. Tickets are $8; call 330-972-7570.