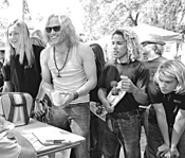 Haul out the 'boards and join the Lords of Dogtown Skatepark Jam in Brook Park (Saturday).
Thursday, May 5

Earlimart's got a serious Elliott Smith fixation these days. (Back when the group started out, it cribbed from the Pixies.) Try listening to the L.A. band's latest album, Treble & Tremble, without stirring memories of the late singer-songwriter. Betcha can't. Singer Aaron Espinoza now sings in a fragile, near-angelic voice that seems to contemplate every tentative step it takes. Songs about death, desolation, and desperation seal the comparison. The band plays the Grog Shop (2785 Euclid Heights Boulevard in Cleveland Heights) at 9 tonight. Tickets are $8, available by calling 216-241-5555.

One of Cincinnati's top alternative-rock bands, Oval Opus, applies a midwestern roots ethos (acoustic guitars, harmonicas) to its blue-collar sound. The band's homey, rustic music -- best heard on last year's self-titled EP -- is a Friday-night beer-drinking soundtrack at its most inviting. The band heads north to the Hi-Fi Club (11729 Detroit Avenue in Lakewood) at 9 p.m. Tickets are $7; call 216-521-8878.

Woo-hoo! Today's Free Comic Book Day! And we're as happy as Ultron was, that time he delivered that ass-whuppin' to Iron Man in Vision and Scarlet Witch, Vol. 2. Really. We can't contain ourselves. So, as soon as we get out of our Spider-Man jammies and finish watching The Batman on the WB, we're gonna head to one of the many local shops that are handing out gratis reads from 11:30 a.m. to 7:30 p.m. Keith's Comics (121 East Avenue in Elyria; 440-323-2000) even promises spoilers to the new Star Wars, Batman, and Fantastic Four movies -- all through the magic of comic books! Visit www.freecomicbookday.com to find out where to pick up some complimentary comics.

Gentlemen, start your horses! To celebrate equine racing's biggest day, Great Lakes Brewing Company is hosting a Kentucky Derby Party today, complete with mint juleps and belly-filling food . . . just like the stuff folks down in Louisville will be noshing on. A silent auction, reverse raffle, and putting contests happen all day, while big-screen TVs beam the race. All this, plus a hat contest for the ladies! Saddle up from 4 to 9 p.m. at the Great Lakes Brewing Company Tasting Room, 2701 Carroll Avenue. Admission is $50. Call 216-651-9537 for more info.

If watching the pioneering skateboarders in the upcoming Lords of Dogtown (opening June 3) gets you pumped to break some bones of your own, you're in luck. Today's Lords of Dogtown Skatepark Jam is a nationwide competition that pits amateur local boarders against each other on a basic street course. A big-ass plasma TV and other prizes are up for grabs. The top three finalists will compete against winners from 30 other cities for a chance to appear on MTV's TRL. Registration and practice are from 6:30 to 8:15 p.m. at Chenga World, 14700 Snow Road in Brook Park. Competition begins at 8:30 p.m. Admission is free; for more info, visit www.lordsofdogtown.com.

There's nothing wrong with giving flowers or taking your mom to lunch on Mother's Day; they're just a little played-out. We're pretty sure Mom would rather check out today's Battle of Magicians in Canton. We picture awe-inspiring feats of trickery that will razzle as well as dazzle. We expect nothing less than the spark- and smoke-filled carnage that graced the climactic wizard-melee in Lord of the Rings (or at least Yoda's Force-fueled brawl with Count Dooku in Attack of the Clones). And while none of the seven magicians -- who hail from New Jersey, Los Angeles, Australia, and other faraway locales -- list "Electricity-Hurling Fingertips" on their résumés, we're confident their sleight-of-hand card tricks and ability to make people disappear will nonetheless wow. Magic happens at 2 p.m. at the Palace Theatre, 605 Market Avenue in Canton. Tickets are $20; call 330-454-8172.

At today's Tween 2 Teen Beauty Camp, girls will get tips on how to make their hair, skin, and nails the most fab in the land. Experts from Carabel Beauty Salon will be on hand to dispense makeup-buying advice, application suggestions, and best of all, plenty of samples. Feel pretty at 7 p.m. at Lakewood Public Library, 15425 Detroit Avenue in Lakewood. Admission is free; call 216-226-8616.

Even though graffiti artists Chris "Daze" Ellis and Mode 2 are from opposite sides of the Atlantic (Ellis was born in N.Y.C., Mode made his name in Paris), their work has much in common. Paint Away the Pain -- The Art of Mode 2 and Daze, at 1300 Gallery, surveys the similar street-to-studio journeys of the master taggers, whose big, colorful, balloonlike illustrations say as much about the artists as they do the cultures from which they arose. They're on view at 1300 (1300 West 78th Street) through May 18. It's open from noon to 7 p.m. today through Saturday. Admission is free. Call 216-939-1300 for more information.

Besides our ears, there's nothing more crucial to the music-listening experience than our stereos, iPods, radios, or whatever brings the noise. The Rock and Roll Hall of Fame and Museum's latest permanent exhibit, Listen to the Music: Rock and Roll and the Evolution of Audio Technology, celebrates more than a century's worth of tubes, wires, and digital files with an enlightening chunk of history. On display are such relics as cylinder phonographs, Victrolas, and reel-to-reel recorders. CD and MP3 players and satellite radio also get props. They're at the Rock Hall (One Key Plaza) 10 a.m. to 9 p.m. tonight and till 5:30 p.m. all other days. Admission is $20, $11 for kids; call 800-493-7655.