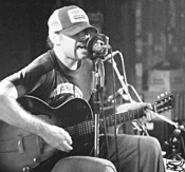 Scott H. Biram brings his trucker hat and his one-man band to the Beachland on Thursday.
Thursday, September 15

Scott H. Biram howls, yodels, and shrieks like a madman on his latest album, The Dirty Old One Man Band. He's a rough, rowdy, and proud hillbilly -- a singer-songwriter who prefers his blues and country music spiked with a shot of late-night fervor. He's also a tough guy. A couple years ago, one month after an 18-wheeler plowed into him, Biram rolled onstage in a wheelchair and strummed his guitar with an IV line dangling from his arm. Let's see John Mayer do that. The Austin-based one-man show (he keeps the beat by pounding his miked left foot) comes on like a cross between Captain Beefheart and the White Stripes. He performs at the Beachland Tavern (15711 Waterloo Road) at 9 tonight. Tickets are $7; call 216-383-1124.

Canton's fourth annual art-film festival, the Reel World, starts tonight with a screening of Masculine-Feminine, which bears all the earmarks of an art film: French, black-and-white, and nearly incomprehensible at times. The 1966 romantic comedy -- directed by Jean-Luc Godard, the master of art-house flicks -- examines the relationship between a pair of emotionally detached Parisians steeped in pop culture. The remainder of the weekend's schedule includes a recent documentary (Mad Hot Ballroom, Friday), an indie romantic comedy (Me and You and Everyone We Know, Saturday), and a Vietnamese coming-of-age story (The Beautiful Country, Sunday). All start at 7:30 p.m. Take a break from the brain-draining multiplexes at the Canton Palace Theatre, 605 Market Avenue in Canton. Admission is $5 per film; call 330-454-8171.

Welsh jazz singer Judith Owens leads into her new CD, Lost and Found, with a gentle, piano-propelled take on Deep Purple's air-guitar classic, "Smoke on the Water." It's never sounded so sultry. Keb' Mo', Cassandra Wilson, and Richard Thompson show up on this mostly original set, which also includes Cole Porter and Sting covers. But it's Owens -- with her subtly seductive piano-playing and singing -- who's at the center of this soft, lovely album. She plays Wilbert's (812 Huron Road) at 9:30 tonight. Tickets are $10; call 216-496-2049.

We could argue that the potentially hazardous mix of booze and testosterone renders every night Fight Nite in the Flats, but tonight's mixed martial-arts event -- which features more than two dozen brawlers -- probably won't end up with somebody being carted off to jail. The hospital, however, isn't out of the question. Rules are few and far between, and punching, kicking, and choking are encouraged in these bloody cage battles. Guys with nicknames like the Bull, the Shark, and the Tyrant will be pounding each other senseless, starting at 8 p.m., at Scene Pavilion, 2014 Sycamore Street. Tickets range from $25 to $55; call 330-324-2525.

More than 40 local restaurants will be participating at today's A Taste of Little Italy, dishing up everything from antipasto to ziti. Live Italian music and 200 different wines will have you shouting Mama mia! in no time. The paisan fest happens from 3 to 7 p.m. at Holy Rosary Church, 12021 Mayfield Road. Tickets are $55, available by calling 216-421-0700.

The Pernice Brothers infuse their fourth CD, Discover a Lovelier You, with the same lush, gorgeous pop that has made their records the soundtrack for closet depressives everywhere. Leader Joe Pernice coats his songs in sunny, dazzling melodies that belie just how screwed up he really is. If the album's song titles ("There Goes the Sun," "Saddest Quo," and "My So-Called Celibate Life," among them) don't give it away, Pernice's breathy, almost exhausted delivery does: He's one neurotic dude. Still, you can always shut out the words, soak in the guitar-fueled hooks, and believe that Pernice wasn't being ironic when he named his band's 1998 debut Overcome by Happiness. The Pernice Brothers play the Lime Spider (207 South Main Street in Akron) at 9:30 tonight. Tickets are $7; call 330-762-2350.

We've declared our love for the drum many times, but we've never given a shout-out to the cymbal. It's the yin to the drum's yang. Salt to its pepper. The Captain to its Tennille. Yet the cymbal's taken for granted, like a booty-shaking shorty at a Snoop show. The Sabian Vault Tour comes to town today, showcasing a new line of percussion instruments and bringing along a bunch of craftsmen who'll school folks on the fine art of cymbal lathing, hand hammering, and sonic matching. We're not exactly sure what all that means, but we bet "Moby Dick" wouldn't sound half as grand without all those loud clashing tones. Prepare to bang away from 4 to 8 p.m. at Stebal Drums, 32612 Vine Street in Willowick. Admission is free. Call 440-944-9331 for more info.

The Hotel Café Tour -- a caravan of flourishing, acoustic-guitar-wielding singer-songwriters -- checks in tonight with Cary Brothers, Imogen Heap, Butch Walker, and Joe Purdy. They're all connected by the Los Angeles coffeehouse where they got their start. Show time is 9 p.m. at House of Blues, 308 Euclid Avenue. Tickets are $15, available by calling 216-523-2583.