Three Artists Explore the Concept of Surface, and What Lies Beneath, at Zygote Press 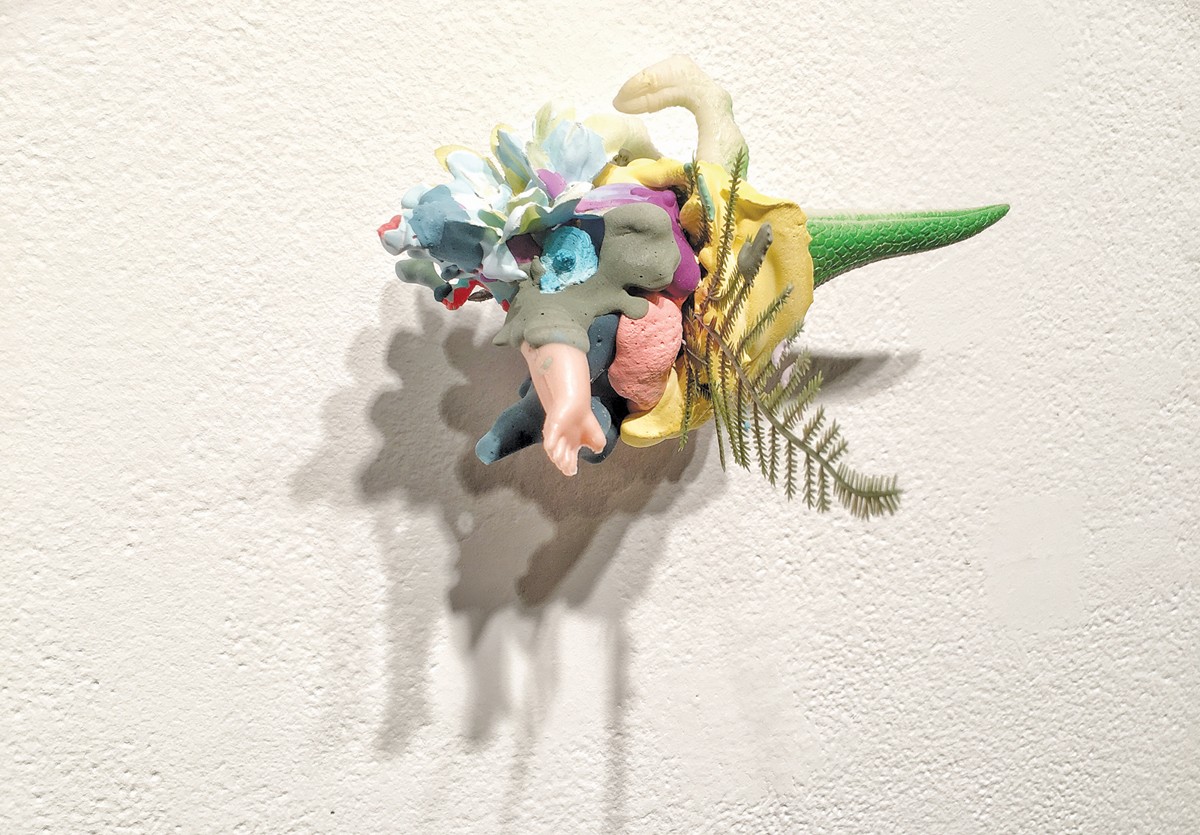 Supports/Surfaces was a short-lived, mostly French art movement, from 1969 through 1974, whose participants deconstructed their work by visually taking apart and recreating the supports and surfaces of not only the physical being of the artwork but also the surface of what their art represented.

On the surface, things are not what they seem at Zygote Press. Curated by artist Nicole Schneider, Re:surface brings together Grace Summanen, Elizabeth Emery and Schneider as they scuba dive into ideas of concept and formality of surface in a delightful exploration that is deeper than its face value. The exhibition is free and open to the public through Feb. 15.

Elizabeth Emery's signature plaster sculptures are combined with threads and other materials embedded within each piece. Her use of material is deceptive in that we imagine they can burst open and reveal a soft interior instead of hard plaster. They are like small, puffy planets that beg to burst at the seams. Emery amuses us in particular with "marker of a long time," a plaster and mixed-media number that has doll arms, dinosaurs and plastic flora bursting outward like a microcosmic bang. "Thinking backwards" evokes an evolutionary tale. Almost crustacean, the salmon and bright pink hues remind us of a mutated hermit crab seeking shelter while simultaneously molting its exoskeleton. The richly colored "swallowing rocks" erupt with fleshy protuberances that shoot outward and descend toward the floor. It looks as if Emery used a pastry tube to create the perfectly whipped nodules and added gold leaf to create one hell of a delicious wall relief.

To the left of Emery's "swallowing rocks," we encounter Grace Summanen's "Untitled #3 (Mini-Series 1-5)." Greens, reds, browns and periwinkle fold inward in this acrylic, latex and fabric number on wood, greeting us almost with a handshake or, perhaps, a cold shoulder. Summanen's work is sumptuous with bright and muted hues alike. In "Stripes," with its prismatic array of color, the artist uses acrylic, latex and fabric on canvas, furthering her exploration of the deconstructed and then reconstructed surface. It's a hefty piece that reminds us of wet fabric frozen in time. "Drape" is reminiscent of a theater curtain cum landscape, as we again swim throughout the folds of latex and acrylic riddled fabric. We are conflicted as to whether these works would be considered relief sculptures or paintings. Either way, they work.

Nicole Schneider takes the second dimension to task in her playful monoprints that bestow the illusion of collage. Monoprinting is a difficult process, but through scribbles, swirls, mark making and reduction, Schneider makes it look easy. That's not a simple undertaking considering the highly dimensional artworks by her counterparts. In "Negotiations 16," a black monolith lands in space or, perhaps, is launching from the surface in a bustle of white foam, while "Negotiations 13" has more planes than an airport. Repeating the swirls and deep gestural markings, Schneider moves us through the landscape and we question color theory, space and time. "Negotiations 2" is reminiscent of the cool, collected opening sequence of a Bond film or some 1960s advertisement. We might be walking through the doors within a dream, or on the shores of Lake Erie. The cerebral quality of this work shines through.

Even the installation is pleasing to the eye. Curators and gallery directors take note: Re:surface is almost musical. The surface of the gallery walls is broken up, as it too becomes a player in this exhibition. We dance between and through all three artists' work, which brings an added excitement and movement throughout the show.