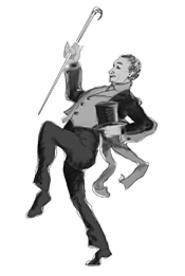 It's tricky business, throwing real-life people into fictional, what-if situations. Think of Time After Time, in which H.G. Wells hopped into a time machine to pursue Jack the Ripper, or Picasso at the Lapin Agile's imaginary meeting between the painter and Albert Einstein, or any number of reimagined history lessons brought to life by a writer's pen. They're often self-conscious, precious, and self-congratulatory in their cleverness.

Director Lynne Taylor-Corbett hopes to avoid these pitfalls with Tin Pan Alley Rag, Mark Saltzman's fictional meeting between Irving Berlin and Scott Joplin, which opens Tuesday, November 27, at the Cleveland Play House. "It's more about a clash of ideologies," she explains. "They very much affect each other in this meeting. You learn a great deal about their music, and their impulse to write music, through the stories they tell."

The Tin Pan Alley Rag is based on Joplin's last year of life, when he trotted up and down New York City's Tin Pan Alley, trying to find a backer for his unpublished opera, Treemonisha. By then, Joplin was well-established as the king of ragtime, and the play picks up as he walks into the office of young publisher and songwriter Berlin in 1915. Drama, humor, and plenty of music propel the working aesthetics of both men. Berlin was a young Russian immigrant who couldn't read a single note of music; Joplin was a dignified African American who learned his trade via a conservatory education. And both men ended up shaping American popular music with their respective tunes.

"I really wanted to do something that had a substantial book and that would mean a great deal to me," says Taylor-Corbett, who received two Tony nominations last year for her work on the Broadway hit Swing! "The argument between commerce and art is a pretty juicy one, and it's something I feel passionate about. This just reached out and grabbed me."

Taylor-Corbett spent more than five months preparing The Tin Pan Alley Rag with Saltzman, an Emmy-winning writer for Sesame Street. The two-character play, which she also choreographed, is not a traditional musical, she notes. "The songs don't pull forward the scene. It's frequently music that enriches the story they are telling. We're trying to find the [correct] tone, without going into musical theater convention.