Send a News Tip
GuitarMania, featuring 100 ten-foot, celebrity-decorated guitars Throughout the city On display through October 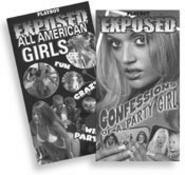 It's one of the great ironies of the modern-day smut biz that it took a boob burglar like Joe Francis to shake Hugh Hefner's once-mighty empire to its creaky knees. Francis is all of 28, which means he wasn't born the first time Hef bagged triplets on the merry-go-round bed. Just a few years ago, around the time Hef was marrying an entire family of wannabe supermodels, Francis was just a business and radio-television major at the University of Southern California (dude, where else?), thinking about what to do with his life. By 1998, Joe Francis was Joe Franchise--a kid about to pocket millions selling videotaped nipple over late-night TV. Boys were about to go wild for girls gone even wilder.

Francis first hit the late-night TV circuit peddling Banned From Television, a clip job featuring footage of shark attacks, executions, bystanders getting mowed down by speeding trains--this generation's Faces of Death. (Most of the material came from TV-news cameramen who shot stuff they could never air or amateurs in the right place at the wrong time, at least for someone else.) As Francis recounts in a recent issue of Rolling Stone, he hatched Girls Gone Wild when someone turned in footage of drunken girls flashing breasts for Mardi Gras beads. That B-roll material turned out to be grade-A stuff: Francis told Rolling Stone he moves some 2 million tapes a year (at $9.99 to $29.99 each), all thanks to a late-night TV ad campaign aimed at the horny kids with spare change and a telephone. Boobs, it turns out, love boobies.

Which is what terrified the hell out of the old men at Playboy Home Video. This year, the brand turns 20 (which is far older than anyone Hef's ever slept with), only it was a birthday that nearly became a funeral. At this time last year, Playboy Home Video was completely dark, offering no new product after two decades of cranking out a very special brand of self-help tapes. After years of taking hits from all sides--from hard-core porn companies that had slowly moved into the mainstream, from freebie nudie pics strewn across the Internet--the latest onslaught of Girls Gone Wild seemed enough to off the Bunny for good.

"You heard all the same things we'd heard--you know, the Internet and free images were going to take over, and who would pay for mature programming anymore when you could get adult programming for free?" says Tony Borg, Playboy Home Video's director of sales and promotions. "We heard all those nightmares, and we thought, well, damn, is that true or not?"

This time last year, Playboy Enterprises Inc. was losing money ass over tit--almost $12 million during just the first quarter of 2001, as Playboy was well on its way to suffering one of its worst years since Hugh Hefner founded the business in 1953. There weren't enough thongs in all of the Playboy Mansion to staunch the bleeding. But one year later, the Mansion isn't entirely in ruins. In fact, Playboy Chairman and Chief Executive Officer Christie Hefner insists the company is about to rebound, after months of layoffs and cost-cutting; she even figured the company's online operations, which have been leaking silicone for years, will break even in 2002.

Hefner will have to rely, in a big (fake-breast kind of) way, on Playboy Home Video. Late last year, after Playboy Enterprises purchased three hard-core pay-per-porn channels--Vivid TV, The Hot Zone and The Hot Network, where most anything goes and everything comes--the company relaunched with four lines aimed at very specific audiences that, execs figure, don't necessarily overlap. After decades of being all things to all people--all naked people--the company has made a dramatic shift to keep pace not only with Girls Gone Wild, but with such companies as Vivid, Wicked, Adam & Eve, Simon Wolf Productions and other porn peddlers who target, ahem, couples (meaning, likely, a right and a left hand) frequenting once-off-limits adult bookstores.

The Exposed line is aimed directly at those buying Girls Gone Wild: The tapes are full of women trading cleav and beav for baubles in New Orleans, or giving sneak peeks for drunken grins. Every now and then, a little soft-core porn wiggles its way onto the screen, but for the most part, this is dorm-room drinking-game material--chug a beer for every flash of pink. The movie-a-month line is soft-soft-core, playing like Cinemax sin, while the Playboy TV line is a little harder, still without scenes of penetration. The Playboy Home Video line is still where you'll see Playmates, an hour-long centerfold without all that text getting in the way.

"We've been relevant for 18 years, and we couldn't see us not being relevant," Borg says of the overhaul. "We toyed with that thought, you know, so we updated the Playboy line, we lowered the retail price, we increased the margins for the retailer. And then we took care of the packaging and added bonus features; for the VHS buyer, we put in a bonus cassette that had almost all the same free bonus features of the DVD purchase. Why should the VHS customer get screwed, you know? We made a lot of those changes, and we weren't sure until it all took off."

"Look, we second-guess ourselves, too, saying, 'You know what, maybe there is no reason these products exist anymore,'" Leshtez adds. "But at the same time, you know, when I first started--I have been here going on 15 years, Tony's going on 13--it's like, gee, you wonder, 'Are we only dealing with husbands whose wives won't let them bring anything else in other than Playboy? Are we dealing with, you know, a very limited group of people, or is there just a different reason for Playboy to exist?' People expect certain things from us--a higher quality, a better production value, a more beautiful woman, a certain consistency to our lines--and that is what we've really kind of thrived on. Yes, there's always going to be competition, and both Vivid and the Girls Gone Wild certainly are our competition--as is the Internet, as is just general entertainment dollars. There's only so much to go around that we find our retailers saying, 'God, I don't know if I have any more money to buy Playboy.' But they buy it, and they do well with it."

Still, Playboy's numbers are good, especially when considering they're pushing product without TV ads and that even the best of the mainstream porn titles sell only in the few-thousand range; rare is the blockbuster that doesn't star a Jenna Jameson. Playboy's even mimicking Francis' marketing strategy: The company's been buying air time on E!, MTV, Comedy Central and BET to peddle Parties From the Playboy Mansion, an all-star compendium available only through mail-order. Leshetz and Borg won't say how many copies of that tape they've sold, only that they'll "be in the hundreds of thousands." And Playboy Home Video's execs believe Francis' numbers, only insist they be put into perspective.

"There's probably 50 to 100 tapes that have sold 2 million units," Leshtez says. "He's also spent millions and millions of dollars to acquire those. But you can't knock success, and he's done a phenomenal job and made a tremendous amount of money. The difference is at retail: You can't do that kind of numbers if you're a Playboy, 'cause you're not going to get into the Wal-Marts of the world."

The irony is that Playboy could have been doing Girls Gone Wild for decades, only the company figured people just didn't wanna see that stuff--those wet T-shirt contests, those Daytona Beach orgies, those stretch marks. Playboy always prided itself on being mature, showing less and making it count for more--being "sexy without being just sex," as Hef always liked to say. Now, it's figuring out how to play ball in this new environment without getting their own chopped off by climbing, however tentatively, into the gutter with Francis, who gets his girls to sign release forms while barely able to hold a pen.

"Actually, the Best of Playboy on Location is really all the stuff we used to cut out," Leshtez says. "It's all the same stuff we've been doing now for literally 20 years. But we just had the opposite, you know, spin on it. I think that there is that fascination nowadays with everything reality. I think that started with reality TV, and it's just blossomed into this genre where everybody wanted to see, you know, Cops and that kind of TV show, which really, I think, started it."

"And, I got to say," Leshetz adds, "I think people just knock those off and put out the lowest common denominator, as opposed to us now trying to catch up to them."

But when it comes to adult vids, there are worse things than coming up the rear.