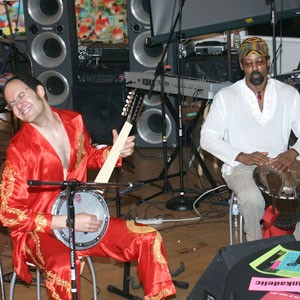 Jay Krasnow says he'd rather perform in Cleveland than in his native Minneapolis. "The band scene has been hijacked with blues-less rehashes there," he says. "The baby-boomer punks want to hoard 1979 music all to themselves. And, the last I checked, supposedly über-cool downtown venues are hosting lip-sync contests on Saturday nights. There are 10 times as many opportunities to jam here."

Even libraries are getting in on the act; Krasnow performs at the Lakewood Public Library this afternoon as part of the Sunday With the Friends music series. Today's program consists of works by 19th-century Hungarian composers Franz Liszt, Mihaly Mosonyi, Emil Abrányi, and Eduard Reményi. But Krasnow is best known for playing "progressive gypsy music" around town with dreadlocked drummer Marceau James, who may sit in on a song or two at today's show.

The pair met last September at Edgewater State Park, where James was banging on a drum. Krasnow happened to have a banjo-like cümbüs in his car and joined him. As they played together, passersby took snapshots. "I had long sought a pulsating foil to perform some semi-improvisational compositions," says the 37-year-old Krasnow. "Marceau is holistic, has a positive attitude, and rhythmically knows how to stay in the lane he's driving. Most importantly, the music itself is and ought to be the common denominator."
Sun., July 16, 2 p.m.