Notes from the ground and other personal debris make fascinating reading. 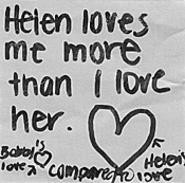 Take note: One of the discarded letters printed for posterity in Found.
It all started on the way to school. Something would catch little Davy Rothbart's eye as he walked the same path day after day. Before long, a discarded photograph or a crumbled piece of paper would find its way into his pocket, on its way to join a collection of similarly discovered items amassed at home. "I would pick up this, well, trash, really," laughs the creator of Found, a magazine that compiles letters, pictures, and other bits of arcane garbage discovered on streets, on car windshields, and inside second-hand furniture. "And I was amazed how powerfully I could connect with someone through a half-page of a note that was blowing across the grass."

What started as a DIY xeroxed project based out of Rothbart's Chicago apartment -- "I spent three nights putting together the first issue with tape and scissors," he recalls -- has become a cult hit. Simon & Schuster recently published Found: The Best Lost, Tossed, and Forgotten Items From Around the World under its Fireside imprint. And readers (including Drew Barrymore, Dave Eggers, and Ira Glass) aren't only fans; they're contributors.

"It's a way of sharing what you find with everybody else," he says. "It stunned me that there are so many other people out there who share my fascination with these little glimpses of people's lives." (Rothbart brings the Slapdance Across America Book Tour to town this week. It includes readings, musical performances based on found objects, and a show-and-tell session, where attendees are encouraged to share their found items.)

Pick up any issue of Found, and you're likely to find abandoned correspondence between neighbors ("You guys have something on your porch that is dripping onto our furniture. It doesn't smell very good"), misplaced mix tapes (with songs like "Yo' Ass Is So Fine" and "Taste That Booty Flava"), and forgotten photos of folks posing with automatic weapons. "I try to figure out who these people are," says Rothbart. "I like the notes that surprise you, where you think they're going one way, and then they totally go a different direction, and then they come back and surprise you again."

And it's the letters (love, hate, and everything in between) that make up the bulk of Found's bounty: "Dad, Come get me at the coffee shop when your [sic] done taking a crap," orders one note. "Happy fuckin' Valentine's Day, you fat ass bitch. P.S. I didn't think you needed any more candy," sneers another. "I look for things that have a fragment of a story," explains Rothbart. "Just enough to spark the imagination. You never get the full story. Even if it's a full note, you don't know what happened before or what's going to happen afterward. But it's enough to make you start thinking.

"You catch these stories on TV or in the world around you, and they're neatly packaged. They have tidy resolutions, and everything's wrapped up neatly with a bow. That makes it easily digestible, but it's easier to forget, because there's nothing lingering. With these found notes, you rush into these conflicts, but there's still a mystery."