The football-frenzied town of Massillon gets the Hollywood treatment. 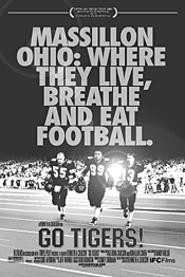 Even though its last state football title was back somewhere between the Summer of Love and Watergate, Massillon Washington High School has still managed to compile the winningest record (723-204-35) in Ohio football history. This year there's a hot new quarterback and a kicker who regularly punches it through from 50 yards out. Having already run up one 59-0 score this season, the Massillon Tigers are once again looking like a high-school team to watch.

How do they do it? Is it the water? The toy footballs handed out to all the male newborns at Massillon Community Hospital? Secret illegal recruiting, with cushy jobs for parents of hot prospects? An old Indian blessing? Or just a deep gridiron tradition that reveres the option, the blocking back, and a fleet-footed wideout with his eye on the post?

Curious? Go Tigers!, a documentary by acclaimed director Ken Carlson, opens at Shaker Square Cinemas this weekend. The film is a long look at football in a football town, a place where Carlson lived and attended school in the early '80s.

"Here's the real secret about Massillon," says Carlson, whose visit to town and a scheduled grand opening in Massillon were postponed last week in the wake of the terrorist attacks. "There may be a point of view that priorities there are out of whack, but I experienced a real sense of beauty living there. There is a community there. On Friday night, you know where your community will be. That's a comforting feeling. I find great solace in that.

"One thing we've seen in this country in the last week or so is a reaching out, a desire to connect and form community. I saw a real sense of faith and community in Massillon. It just happened to be built around football."

Go Tigers! was one of 16 documentaries selected for screening at last year's Sundance Film Festival. The movie follows Massillon through the 1999-2000 season. You see not only the players and the games, but a lot of the peripheral football world. Among the insights are discussions about the community's discontinued practice of holding back promising eighth-grade players for a year, to give them a size advantage for the next four.

"I wanted to do something very honest and very real," says Carlson, who directs TV's America's Most Wanted. "Some of my phone calls now do not get returned in Massillon, but 99 percent of the people in Massillon are on board with this. People were skeptical at first. I said, 'You write the script, and I'll document it,' and I was able to convince them that I was the one to entrust their heirloom to."

With Sundance credits behind him, Carlson had his pick of cities for the premiere. He chose Massillon over more prestigious places. "I'm a Massillonian," he says. "I'm very proud of it."