The Oscar telecast has, for a decade, been Gil Cates' golden moment.

Send a News Tip
I Stand Alone The Cleveland Cinematheque 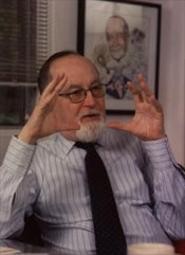 Long Photography, Inc.
Gil Cates returns for the 10th year as producer of the Oscar telecast. Is he a glutton or genius? Ah...yes?
Gil Cates takes a long, deep breath before answering the question: Is producing the Academy Awards show the ultimate no-win situation? Cates has produced nine of the past 11 Oscar telecasts, and he returns March 25 after a year's layoff; for those scoring at home, Cates is not to blame for last year's epic, four-hours-plus show, which ran so long it stopped being a TV show and turned into a lifestyle choice. Once the 73rd annual Oscar shindig wraps, somewhere around 4:32 p.m. March 26, Cates will lay claim to the title of The Man Who's Produced More Oscar Shows Than Anyone Else. But, again, is it a moniker worth going to the trouble of possessing? It's a show that rarely receives much positive press the morning after, once it takes the money from the dresser and disappears into the sunrise. In the daylight, it's chided for being, among so many other things, too short or too long, too turgid or too reckless, too smarmy or too smug.

"Ya know, it's interesting," Cates begins, finally, from his Los Angeles office, where the evening's production board hangs in front of his desk--full of promise or perhaps threats. "I had a professor at Syracuse University, and he instilled in us the joy to be taken from this work is the process, and if you get joy from the process, it makes everything else OK in a way. The truth of the matter is, I enjoy doing the show. I don't enjoy reading bad reviews, and I don't like it when people don't like something, but I do enjoy doing shows I enjoy..."

His voice trails off, as Cates is interrupted by an assistant who hands him a note bearing bad news: "Someone we thought was going to be on the show is not," Cates says, in a tone of voice that suggests it's a problem he can deal with. "My colleague likes doing this to me in the middle of a conversation. Thank you very much."

So, who dropped out?

"It's Kate Winslet," he says, referring to the Titanic star. "She couldn't come in from Europe."

Winslet's failure to appear is the least of Cates' concerns; Bob Dylan's inability to attend and perform "Things Have Changed," his best song nominee from Wonder Boys, is far more problematic. (Dylan will be on tour in Australia, and word is he will perform via satellite.) What most concerns Cates is putting on a show that congratulates Hollywood--indeed, one that revels in its sheer, galling fabulousness--without knocking it to the floor by patting it too hard on the back. To hear him talk about it, producing the Oscar telecast is an enormous responsibility, far more than just putting on the world's biggest variety show (which it is, complete, once more, with Debbie Allen-choreographed dance numbers).

Cates insists the Oscarcast is about reveling in tradition, respecting the medium, and regarding what he calls the "mythology" of Hollywood; it's about fun, without making fun. But it's no longer quite that simple: MTV and VH1's myriad teen-beat shows, the Emmy's giddy self-deprecation, and the Golden Globes' drunken bash have transformed our notion of an awards show into something far less dull and sanctimonious. We have little patience now for hour upon hour of film montages celebrating "Women in Film" or "Politics in Hollywood"; we have little interest in sitting through one more Saving Private Ryan dance number (Normandy was, likely, less painful). We want fast and funny, bright and breezy--high drama cut with a knowing sense of humor.

The Oscars have always been the prize; even last year's painful exercise in tedium drew some 46 million viewers in the United States, 2 percent more than in 1999. If it's a no-win situation for Cates, it's a no-lose situation for ABC, even though the network is said to be having trouble selling all of its ad spots ($1.4 million for 30 seconds). But Cates insists he can't pay attention to the other awards shows, which he watches and praises but, ultimately, dismisses for one simple reason: They ain't the Oscars. They aren't The Big Show. They aren't about...The Movies.

After all, most television shows and pop songs are evanescent: Who can tell one episode of Frasier from any other these days? Who doesn't expect the day when Eminem ships directly to the cutout bin, after a stint on his own WB sitcom? And what musician or TV actor doesn't want to be a Movie Star, be it a De Niro or a DiCaprio? The rest of the entertainment business is the minor leagues compared to The Movies--billionaires, still playing at Triple-A. So bring on the Emmys or Grammys or the MTV Music Video Awards, Cates insists; they're but warm-up acts, cheap filler. The Oscars? They're tradition--Hollywood's Christmas, the audience's Super Bowl Sunday. It matters little how ridiculous they are--and they always are, because Hollywood has this awful habit of mistaking "tacky" for "taste" and "kitsch" for "class"--because, in the end, we will watch, even if Gladiator conquers the night.

"The Oscars is almost an anthropological research study," Cates says, sounding less like a Hollywood director (he's helmed a handful of TV series and 25 films, including Oh, God! Book II and the 1979 tearjerker The Promise) than a college professor. "If you want to study what the world was like in 1955, you'd do pretty good looking at the Oscars. You'd see what people wore, how they spoke to one another, what was on their minds, the movies they made. You'd get a great sense of the country. In one sense, the Oscar show reflects a broader spectrum of human nature than any other show, because the movies are truly universal. They are seen all over the world, they reflect the broadest possible culture, and to the degree that any show synthesizes that broad culture, the Oscars really do. It also brings to date your current mythology in terms of who the current stars are. The star this year is Ben Affleck or Leonardo DiCaprio or Russell Crowe, and that gives a sense of what we are, so I think that the show is a unique phenomenon that way.

"The other shows, whether it's the music show or the television show or even the Screen Actors Guild show, are limited to their purpose. Think about it. Think about the thousands of pictures you have stored in your mind that you've seen on that big screen, whether it's Vivien Leigh saying, 'I'll never be hungry again' or Barbra Streisand in Funny Girl or Raging Bull with De Niro. You and I can talk about these pictures and immediately associate the picture with a time, a place, a phenomenon. We've been watching the Oscars with our parents, our grandparents, our great-grandparents. It really is inextricably intertwined with the fabric of our own being, and we are in many ways a reflection of the movies we see, and the movies are a reflection of us."

Cates is loath to disclose any of the night's, ahem, surprises (like, say, Julia Roberts and Gladiator won't take home their undeserved statues?) but does reveal there will be the much-loathed dance numbers ("a little dance, anyway") and three honorary Oscars, which will eat up a good 30 minutes (you've been warned). And he does promise that this year's show will run far shorter than last year's debacle, produced by his friends Richard and Lili Zanuck. Then, the show couldn't run any longer without turning into its own network.

This is not the first time Cates follows a flop: He came aboard in 1989, the year after producer Allan Carr staged perhaps the worst Oscar show in its history--the one that paired Rob Lowe with Snow White for a musical number so horrific the Walt Disney Co. filed suit against the Academy, claiming copyright infringement, among several other allegations. The image of Snow White serenading Tom Hanks and Michelle Pfeiffer, as Merv Griffin looked on, lingers 12 years later, like gruesome autopsy photos. Cates was brought in by the Awards Presentation Review Committee--the Oscars' version of the Warren Commission--to determine what went wrong, and he wound up taking the job himself, along with $150,000 in pay (he was the first man to be paid for producing the Oscars).

Cates won't talk about the 1989 debacle--he's sworn to keep all such discussions off the record--nor will he go on the record about why David Letterman's appearance as host in 1995 was really so roundly loathed. He does, however, still stand by his choice of Letterman as host, as he should--he was the perfect pin to pop Hollywood's pretentious balloon. Cates, who convinced Steve Martin to host this year's affair, insists this year will be his last. Then again, he's said the same thing twice before.

"The fact is, you have the whole world watching, and everybody's a critic, which is great," Cates says of his reasons for wanting to produce the show. "If you do dance numbers, people say you shouldn't; if you don't, people say you should. The best piece of advice I had was from Sam Goldwyn, when I did the show the first time. He said, 'Whatever you do, a substantial number of people won't like it, so you might as well do the show you like.' To quote a very wonderful producer, my late brother, it is what it is. What are ya gonna do about it? You can't change it. You can only do the best you can.

"The truth of the matter is, it really goes back to the fact I enjoy the process. I enjoy the fact that...at the end of the day, there are two facts of certainty I can tell you that I can't tell you about a play or a movie. One is that come hell or high water, the show will begin at 5:30 p.m. Pacific Standard Time March 25, and come hell or high water, the show will end the same day roughly three and a half to four hours later. That's kinda neat. When I finished doing my movie [A Death in the Family for PBS], I stayed working on for months--Jesus Christ, months afterwards--and it still hasn't screened. It's not gonna screen till October. With the Academy Awards show, when it's over, it's over. Most people don't remember who won the Academy Awards last year."

But they do remember the Academy Awards show. That's why Cates--and we--keep coming back.