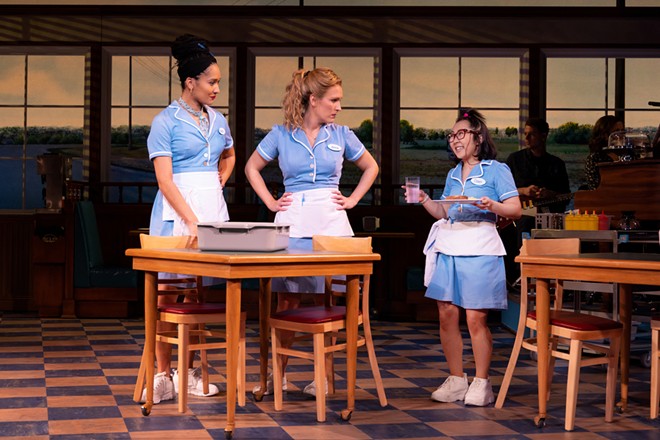 There are two kinds of people in the world (no, not those two). There are pie people and there are cake people, and never the twain shall meet. Anyone who claims to love them both is clearly prevaricating, because the two dessert experiences clearly define who you are as a human being, and you can't be both.

As all pie people know, we are clearly superior. This is proven in the current touring musical at Playhouse Square. In "Waitress," with music and lyrics by Sara Bareilles and book by Jessie Nelson, the action is set in Joe's Pie Diner, and features a litany of imaginative, delicious pies—and, yes, a story and songs that go with—to delight those of us who are devoted to the glories of pie. What's wrong with cake? Well, as we all know, cake would be much better if it were filled with apples or coconut cream, simmered in sugar, then mounded onto a flaky substructure of crust. But then it would be pie.

In the interest of critical clarity, your faithful scribe will now set aside her passion for pie and attempt to share observations from a strictly theatrical standpoint. From that perspective, "Waitress" is a delightful offering, stuffed with engaging songs and a few outstanding performances. Heck, even the scene changes as created by the original director Diane Paulus are worth half the price of admission.

That said, the script often relies on old gags and is frequently a bit too sweet. Right from the start, we are immersed in the succulent elements of baking as the words "sugar, butter flour" are intoned by an ethereal voice, as if God had descended and was providing a basic recipe for happiness. Jenna, who doubles as the joint's designated pie baker, hears the message and is out to convert all her customers to the pleasures of Lulu Lemonade Pie, Polka Dot Peach Pie, and I Don't Want Earl's Baby Pie.

Earl? Oh, yes, the story. Pie whisperer Jenna is married to Earl (Brad Standley), a blue-collar worker with some rough edges who abuses Jenna, steals her tips and threatens to make Jenna quit the job she loves. She also discovers she is pregnant when she visits the local OB/GYN Dr. Jim Pomatter (a goofy-sexy Brian Fenkart), who falls for Jenna and the Mermaid Marshmallow Pie she brought to her appointment. Jenna decides not to tell Earl about the baby and as her relationship with Jim develops, it's clear some decisions will have to be made.

Meanwhile back at the Diner (did I mention they serve pies?), Jenna gets through her days thanks to her support system: two other waitresses, brassy Becky (Olivia Lucy Phillip) and meek, insecure Dawn (Kendyl Ito), along with the gruff boss and chef Cal (Timothy John Smith). Jenna strikes up a friendship with old Joe (Bill Nolte), founder of the Diner and the Yoda who provides wise words to guide Jenna's pie fortunes.

This musical, which is based on the indie film of the same name and opened on Broadway in 2016, has developed a "Wicked"-like following among those who are drawn to the small-town characters and the evocative songs by Bareilles that culminate in the anthem "She Used to Be Mine." This is sung by Stephanie Torns, who gives Jenna a will of iron underneath her whipped toppings and meringues.

Another highlight includes an over-the-top appearance by Daniel Quadrino as Ogie, a quirky customer who locks nerd-vibes with Dawn over their love of, um, American Revolution reenactments. It's a subplot that is forced and entirely silly, but the actors make it work, right up to and including a simulated pie-centered sex act.

While the tone of "Waitress" is all over the place, and the structure leaves a lot to be desired (Becky gets stiffed, musically that is), the show offers its heart on a big ol' pie plate. And that's a dish that's hard to turn down.