What Becomes a Legend Most?

Tea at Five captures the flesh but not the spirit of America's most enduring movie star. 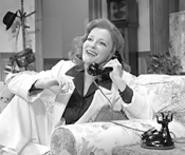 Mulgrew goes where Hal Holbrook has gone before.
The Cleveland Play House seems most alive when it's reanimating departed legends. Reincarnations of Lillian Hellman and Janis Joplin have showcased the venerable institution at its best. With Tea at Five, the Play House has, for the sadly brief spell of two weeks, imported from the Hartford stage its shrewdest enterprise since Madeline Kahn in Born Yesterday.

Kate Mulgrew, who built a TV career highlighted by stints as Columbo's wife and a Star Trek vessel's commander, here trades on her resemblance to the legendary Katharine Hepburn, in the manner of Hal Holbrook and his depiction of Mark Twain. Anyone naive enough to expect off-Broadway playwright Matthew Lombardo's one-woman portrait of Hollywood's longest-lasting female star to be a serious penetration of Hepburn's soul will be seriously disappointed. Still, the two hours that Mulgrew imperiously commands the Bolton stage are of far more significance than your average National Enquirer exposé. The writer has taken to heart the philosophy director John Ford (one of Hepburn's most signficant loves and influences) used in The Man Who Shot Liberty Valance: "When the legend becomes a fact, print the legend."

Lombardo has shaped his theatrical ode around the two most defining eras of Hepburn's career: her youthful days, when Hollywood's enthusiasm for the actress waned in the wake of several box-office flops, and her golden (Pond) years, when she made an unlikely return to big-screen prominence.

The show is structured to reveal how the century's most revered survivor faces two crises, 45 years apart, both set within the confines of the rustic, beamed parlor of the Hepburn family's Fenwick estate. In Act I, set in 1938, history and symbolism come together in the form of an impending hurricane threatening to destroy the family cottage. A young Hepburn, declared box-office poison and faced with a career crisis, searches for an antidote as her family haven is dashed by the elements. Rescue comes with the delivery of a manuscript entitled The Philadelphia Story.

In Act II, set in 1983, the more frail and ethereal -- but just as indomitable -- Hepburn reminisces over the sufferings that forged her character and tempered her Yankee ferocity: her beloved older brother's suicide and her rigid, unyielding parents. It was her devotion to the incredibly charismatic, but difficult and alcoholic Spencer Tracy that rendered Hollywood's most formidable lioness a lamb. The conflict here revolves around whether she should give in to the frailties and humiliations of her advancing years, and whether she should accept the offstage pleas of Warren Beatty to play his mother in a remake of Love Affair.

Of course, all the aforementioned elements are merely the MacGuffin upon which the play functions. It is really about the two sides of the Hepburn persona that kept her entrenched in the public consciousness for more than 70 years: the tawny thoroughbred of The Philadelphia Story, waiting to be forced off her pedestal, and the frail earth mother of On Golden Pond, ravaged by Parkinson's disease, but still radiant and determined.

The reports from Hartford, where Hepburn's family holds court, have relatives walking out of the play, their aristocratic nostrils disdainfully in the air. This is understandable: With all its reverence, Tea at Five reduces its subject to little more than a movie-star iconography. Noted director John Tillinger's painstaking efforts to have Mulgrew re-create the enduring Life magazine glamour poses of the fiery blueblood we saw in The Philadelphia Story, standing in slacks before a fireplace, hands on hips, in the manner of an art-deco Diana -- and later, the Good Housekeeping covers of the aged Yankee dowager queen seated on a couch, legs insouciantly tucked under -- are worth the price of admission.

Yet Lombardo's script, with all its shrewd architecture, reduces its subject to pop psychology: the eternal little girl who never recovers from the emotional absence of a distant father, looking for a daddy substitute in Howard Hughes's power and Spencer Tracy's alcoholic tantrums. The play relies heavily on still-enjoyable but hoary anecdotes ("Mr. Tracy, I'm afraid I'll be too tall for you." "Don't worry, I'll cut you down to size."). It negates its subject's toughness and shrewdness, having Hepburn yearn like a child at a toy-store window for the prize doll: the role of Scarlett O'Hara.

Worst of all, Tea at Five imposes the conventions of Hepburn's movies on her real life. The actress discovered and nurtured the script of The Philadelphia Story -- the work that saved her career -- though the play would have us believe that it was delivered to her as a lifesaver from the benevolent Howard Hughes. And the sight of Hepburn prattling on, as if there were an invisible talk-show host in the room, is never sturdy enough to sustain the show's two hours. One feels that if the real actress were still in control of her own destiny, she would give this play a condescending wave as she imperiously left the theater.