Wheels in the Sky

Conneaut native Trevor Vines ramps up for a hometown crowd. 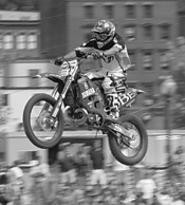 Trevor Vines takes flight at the Gravity Games.
Trevor Vines isn't big on sitting still. When he's not catapulting his body and bike over 90-foot jumps, as he will this week in the Gravity Games' freestyle motocross competition, he's traveling the country in search of the next ramp. If it's not off to a contest, it's to showcase his aerial skills at a sponsor demo in Las Vegas or Seattle. Or at an Ozzfest or Warped Tour stop. Or at a monster truck show near you. Such vagabond ways have earned the 28-year-old from Conneaut the nickname "Trevor From Wherever."

But the high-flying Vines will slow down long enough to put himself and his bike to the test at the Gravity Games, gunning his Yamaha 250 up and over dirt ramps sculpted from 280 truckloads of dirt.

"I need at least a day of practice on a course to get a feel for each of the 8 or 10 jumps they've set up," says Vines, whose repertoire includes more than two dozen mid-air maneuvers, in which he does handstands, kickouts, and various release and grab moves. "Then [I] figure out what tricks to try on which ramps."

Look for Vines to open with the Cliffhanger, in which he stretches out over the bike and holds onto the handlebars with just his feet. Other tricks likely to be included are the Look Back Heart Attack -- he first does a handstand off the bike's seat, then turns his head to the rear -- and the Sterilizer, in which he throws his legs over the handlebars and kicks out to a V formation, then brings his legs back together for the landing -- all while holding on to the bike.

Though they may look spontaneous, Vines explains, each trick is developed slowly over a year or more. "You start with a trick you know and gradually build off that in a hundred practice jumps," he says.

It's clearly a dangerous profession. After racing bikes for 12 years and jumping them for the past four, Vines has accumulated a long list of injuries. He has six screws in his ankle and two pins in his foot; he has broken an arm and a leg, fractured his shoulder, and had numerous concussions.

"A lot of those injuries are from racing bikes, getting caught in a pileup," he explains. "Of course, some are also from being ignorant or cocky."

Vines's cheering section this weekend will include his 62-year-old father, who still races bikes in Amherst and Ravenna; his 6-year-old son, who already rides a Yamaha 50; and his girlfriend, who helps make his travels a little less lonely.

Though he now lives in Riverside, California, and expects to keep jumping for many years, Vines is beginning to put down roots. He recently bought 50 acres of land in Ashtabula County. "I want to build a place where people can come to ride bikes and camp," he says. "There'll be courses for different skill levels.

"All I need now is a bulldozer."