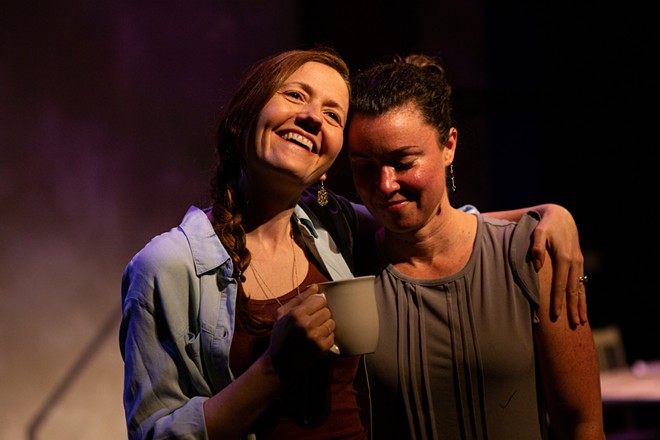 There's no better time than now for a play with political themes, such as an adaptation of Henrik Ibsen's "An Enemy of the People." After all, that title was famously used by Donald Trump during his presidency to denigrate a free and contentious press, the bedrock of our democracy that many in Congress are currently trying to dismantle.

In this "Enemy" at Rubber City Theater in Akron, the contemporary twists from the original that adaptor Les Hunter employs include a female scientist—Dr. Tammie Stockman (Courtney Elizabeth Brown), who is in a lesbian relationship. There is also one scene conveyed entirely by test messages projected on a wall, and an exceedingly brief art film that seems disconnected from the rest of the play.

In the main, however, Hunter hews close to the original "Enemy." An environmental scientist in Summit County has discovered that her small town's healthful and healing springs and spa, a huge tourist attraction, is rife with a nasty brew of dangerous pollutants. Although shocked at her findings, she is eager to write a report and tell the world, so that lives can be saved. She is supported by her wife Kate (Jennifer Ruth) and by the local newspaper editor Heather (Katie Wells) and lead writer Billy (Andrew Pope).

But soon Tammie's brother Peter (Jeff Haffner), the mayor of the town and a jovial, hardline conservative, tries to squash that report by pointing out a new water filtration plant would cost tens of millions and take a long time to construct, washing away the town's tourist dollars that are vital to the community.

From that point, things get complicated in this 90-minute production—with more of the Stockman relatives chiming in, including crotchety grandpa Martin (Keith Ramsey) and Tammie's daughter Petra (Arianna Allen). Then a Chamber of Commerce's rep, Anthony (Stuart Hoffman), weighs in, offering to buy the newspaper so the business community can control the content, a ploy Heather goes along with to keep the failing rag afloat.

Once the two sides are established, the story seems familiar, with the adaptation echoing the Flint, Michigan water disaster as well as the COVID pandemic we are all still enduring. In the latter, as in this play, science is battling those who want to ignore imminent health dangers so that commerce can proceed uninterrupted. Arguments like that can lead to horrific results such as, um, one million deaths and counting.

The actors handle their roles well for the most part, and director Lana Sugarman keeps the play on sure footing. At the end, however, there is a related event that makes the situation even more dire. Meanwhile, things spin downhill for Tammie as she tries to hold onto her ethics and science-based knowledge.

Are people like Dr. Stockman, and science itself, a savior or an enemy of the people? Ibsen himself wasn't sure. All we know is that when Tammie declares that "Truth will always win out over dishonesty and tyranny," we're pretty sure that's not the whole story.

AN ENEMY OF THE PEOPLE
Through May 21, produced by Rubber City Theatre at the Sandefur Theatre, the University of Akron, 228 E. Buchtel Ave, Akron, 234-252-0272, rubbercitytheatre.com.