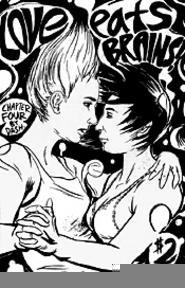 What would Superman say? Spaces Gallery explores other comic themes.

Spider-Man would poop his Spideypants if he took a peek inside underground comic books: sex, drugs, rock and roll. You know, real-life stuff. Stuff that the webhead and his costumed pals never seem to encounter in their fantasy world -- unless, of course, there really is a world out there populated by gigantic-breasted, spandex-clad superwomen and snarling mutants with razor-sharp claws.

"Most people, when they hear the word 'comics,' think Batman or Superman," says Christa Donner, curator of Page Me: The Art of Zines, Comix, and Other Artist-Made Books, an exhibit dedicated to underground publications, which opens January 10 at Spaces Gallery. "That's sort of like if the only films available to people were action films, and people assume that's what film is. That doesn't begin to explain all the differences."

Page Me is an impressive assembly of more than 100 artists who self-publish zines, alternative comics, and handmade books. And, in a wonderful twist on stuffy-museum convention, actual copies of the printed work will be on display and available for reading. "I hope it doesn't sound too hoity-toity, but we have white gloves people [can wear], so they don't damage the books," Donner says. "We're also providing chairs and a reading area.

"These are works of art that you just can't walk past on a pedestal and glance at. It would be like hanging a copy of War and Peace on the wall. It's really important that these be read."

Most remarkable, however, is the wealth of material -- from the surreal Big Questions to the local ArtCrimes -- Donner and co-curator Chris Conti gathered for the exhibit and the collective plan they have for perpetually expanding it. "In keeping with the self-publishing aspect of it, there's an area where people can keep adding their own zines and comics as they come in," Donner says. "So, the exhibition will keep growing. There are definitely reasons for people to stop by after the first day."

Page Me's resource room, in addition to the ever-growing contribution rack, comes with a zine guide and information on how to order many of the publications in the exhibit. There are also a few special events planned, the most exciting of which is Zine-o-Phobia, on February 1, which includes a presentation by the editor of Found Magazine, readings by writers featured in the show, and a zine swap and sale.

"This is an art show, but it's also a resource meant to educate the public," Donner says. "It's important that this is accessible to people."

A zine writer herself, Donner sees the art as a liberating and viable form of self-expression -- and not just for angst-ridden kids. "This isn't a teenage product that we outgrow," she says. "Why would we make our own media and stop when we become adults?

"For me, it's a great way to share information with people. And that's really what the show is: a really good way to share ideas."