During the summer of 2013, James Carol, the guy behind the local promotions company Cleveland Music City, decided to put together a music festival that would simultaneously celebrate Halloween and champion the city's best indie rock bands. So he set about booking the Modern Electric, Welshly Arms, Seafair and Simpler Times along with two non-local acts to perform at his inaugural concert. He dubbed the event the Shining, both as an homage to the horror film and as a way of acknowledging the showcase element of the event. At the time, he said he wanted to build the next wave of independent artists in Cleveland through the event. And that's not all. The guy regularly promotes local shows with upcoming acts like These Knees, Blaka Watra and Obnox, and collaborates on concerts with the people behind the new media event Weapons of Mass Creation. He's one of the city's true tastemakers. 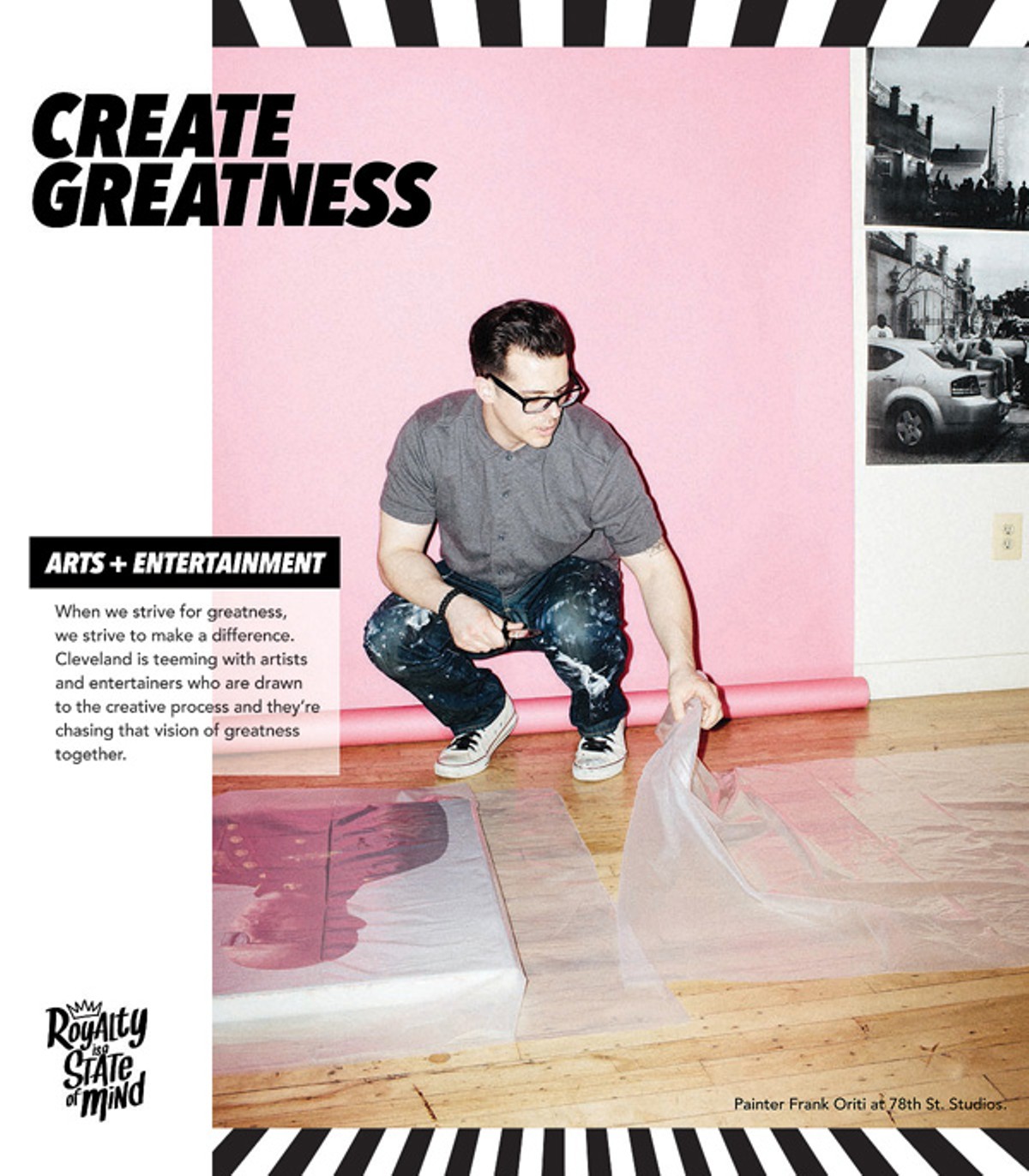 Comedy in Cleveland is an interesting beast, with very little organization and lots of bad standups repeating material at five or six weekly open mics. That's why smarmy sketch content can be such a breath of fresh air. Last Call Cleveland won this honor last year and they take home the crown again this year. It's four really funny dudes, helmed by the omnipresent Mike Polk, who were YouTube sensations thanks to hits like "Honest R&B Song," "First Semester Spanish Love Song," and of course Polk's seminal "Hastily Made Cleveland Tourism Video." These guys are smart, wacky comics with pedigree and charm. They've been delighting audiences around the country and have even earned rave reviews in Canada! Canada, we say! Their YouTube videos are still a treat on repeat viewings, and their occasional shows at Playhouse Square are a great chance to see their hijinks in a live setting.

Whether you're a 20-year regular at this event or a total rookie, the Tremont Art Walk is among the most enjoyable cultural mainstays in Cleveland. It all goes down on the second Friday of each month, from 6 to 10 p.m. All of the galleries and boutiques in this most creatively concentrated neighborhood fling open their doors to the curious. There's wine and good cheer around every corner. Along Professor Avenue and up and down its crossstreets, the area takes on a festival-like atmosphere. Of course, the energy gets cranked up as the temperature rises. It's a monthly must-do that makes you feel like you're strolling the sidewalks just outside your own home, even if you hail from as far away as, say, Solon. Tremont is everyone's neighborhood for one night each month, and all residents in question reap the benefits of cultural awareness, fine snacking and the fresh air of one of Cleveland's gems.

Best DJ on the Ones and Twos/ Best Hip Hop DJ: E-V

A veteran of the local club scene, E-V recently teamed up with locals Lorine Chia and Machine Gun Kelly on his catchy new dancefloor-ready single, "GoodTime." Sounding a bit like Nicki Minaj, Chia dominates the track but MGK shows up mid-song to drop some rhymes. "I'm trying to change the world with one drink, motherfucka," he aggressively raps. It's a solid tune. On it, E-V successfully blurs the lines between hip-hop and EDM. The song's premiere earlier this year was a big enough deal that Rolling Stone covered it. You can usually find him spinning at all the typical Warehouse District bars — places like Rumor and Barley House.

Staff Pick (Ones and Twos): E-V

Best Festival: Feast of the Assumption

Rather than sheep, the typical Clevelander counts fried ravioli to fall asleep throughout the year — and the Feast of the Assumption is the reason why. The annual explosion of excellent eats in Little Italy ranks among the most important weekends in our region (or world?). We recommend taking the Red Line out there; you'll avoid the parking headache and your bloated stomach will have easy access to a train ride home post-game. While you're there and over the course of four beautiful days, make sure you take in all the Feast has to offer: the procession, live music, arts and, duh, the aforementioned fried ravioli. This thing's been going on since 1898, so there's a massive meatball of history buoying the event each year. They'll once again anticipate some 100,000 visitors this year — and you had better be one of them.

There is simply no place like home, and in this case we're talking about 78th Street Studios. Where else in Cleveland can you see over 40 working local Cleveland artists in any and all mediums under one roof? Sculptures? They got it. Paintings? Of course. Wood working? Naturally. Vases, bowls and assorted trinkets? Check. Jewelry? Absolutely. Celebrity icons painted on skateboards? Pinball? Why not. (Yes, Super Electric Pinball is on the third floor and sports plenty of old machines to play -- for free.) Third Fridays have become a tradition around these parts. That's when 78th Street Studios opens its doors to the public for a wandering night of exploration, wine and art discovery. The monthly mixer embodies everything we love about the studios -- the mix of high and low art, good friends, affordable pieces, food trucks and a cavernous, beautiful space unlike any other in Cleveland. Stop by, stick around, enjoy.

>Cleveland has an endless amount of talent in this category — you can find much of it at work at the annual blast that is the Weapons of Mass Creation Fest — but readers singled out Joshua Wallace in 2014 and saw the same unique brand of fresh talent that we here at Scene saw as well. Former Browns Josh Cribbs and Reggie Hodges tagged Wallace to work on various fundraising and apparel campaigns, and he's parlayed those opportunities into work you'll find all across town, from the walls of the B-Side Arcade and Liquor Lounge to the pages of this humble rag. Whether he's illustrating a piece of fiction or collaborating with Another Enemy, his work is striking and unique, and if that wasn't enough, you simply won't find a nicer fella.

House music was arguably at a peak in the '80s and '90s, but DJ Mimo successfully keeps the genre alive here on the North Coast. In the bio he's posted on his website, he describes himself as a "fixture on the Cleveland club and hotel lounge scene." That's an apt description as Mimo is the go-to guy for cocktail parties — he's even spun at the historic Pump Room in Chicago's swanky Gold Coast neighborhood. In the three short years he's been active on the local club scene, Mimo has opened for acts such as ATB, Sander van Doorn, Robbie Rivera, Tritonal and Paul Van Dyk. He was on the bill with electronic heavyweights Krewella at the festival that took place at Public Square to ring in the New Year. He's also set to perform at Life in Color, the big outdoor paint party that takes place on May 3 in the parking lot at Jacobs Pavilion at Nautica. "Suicide Holler," his terrific collaboration with local singer Lauren Lanzaretta, features thick bass riffs and soulful vocals.

George Vlosich began plying an unusual artistic trade at the age of 10 back in 1989 — pieces created on the classic children's toy, Etch A Sketch. Since then, his portraits of Charles Barkley and Michael Jackson and LeBron and dozens of others landed him spots on national TV and plenty of exposure. It was just the tip of the creative iceberg for him and his brother, Greg, who run GV Art & Design. They're the folks behind some of the most popular T-shirts in Cleveland — the Tribe "Goon Squad," the Cleveland weather forecast, the "Factory of Sadness," etc. — and above all, they're about the city, first and foremost. In fact, it's their motto: Wear Cleveland Proud. Better than that, they do Cleveland proud. Find their wares online or at their storefront in Lakewood.

The Cedar Lee, a Cleveland Cinemas indie theater on the east side, wins this award every year. There's gotta be a reason. It really is the only venue in town to show indie, foreign and limited-release titles. Valley View and Crocker have undeniably superior screens, and AMC has upped its game with the big comfy seats, but the programming at Cleveland Cinemas gives it the legup. (The Capitol would likely be a more viable competitor if it had more than three screens.)  Wth Cedar Lee, you can count on a continually surprising line-up with challenging foreign fare, documentaries, and occasional wider release films that appeal to the art-house crowd. The late-shift cult classics series they share with the Capitol is another point of recommendation. Situated on the corner of Cedar and Lee in Cleveland Heights, there's an ample roster of bars and restaurants nearby to enhance your movie night as well.