By definition, a buffet is an accident waiting to happen. It goes against all that we've come to expect — nay, demand — from our beloved restaurants. Diners must go to the food, as opposed to the other way around. That food is ready and waiting instead of being cooked to order. Rather than whittle down our meal choices to just one or two select items, we get to say, "I'll have one of everything, please!" And what's with all that standing? So, yes, we were pleasantly taken aback to find a wonderful buffet in the basement of the Horseshoe Casino. Various stations offer up a continuous supply of freshly prepared American, Italian and Asian dishes. Prime rib and turkey are carved to order. The dessert section is awash in pie, cakes, cupcakes and build-your-own sundaes. And the dining room is far less depressing than an Old Country Buffet. 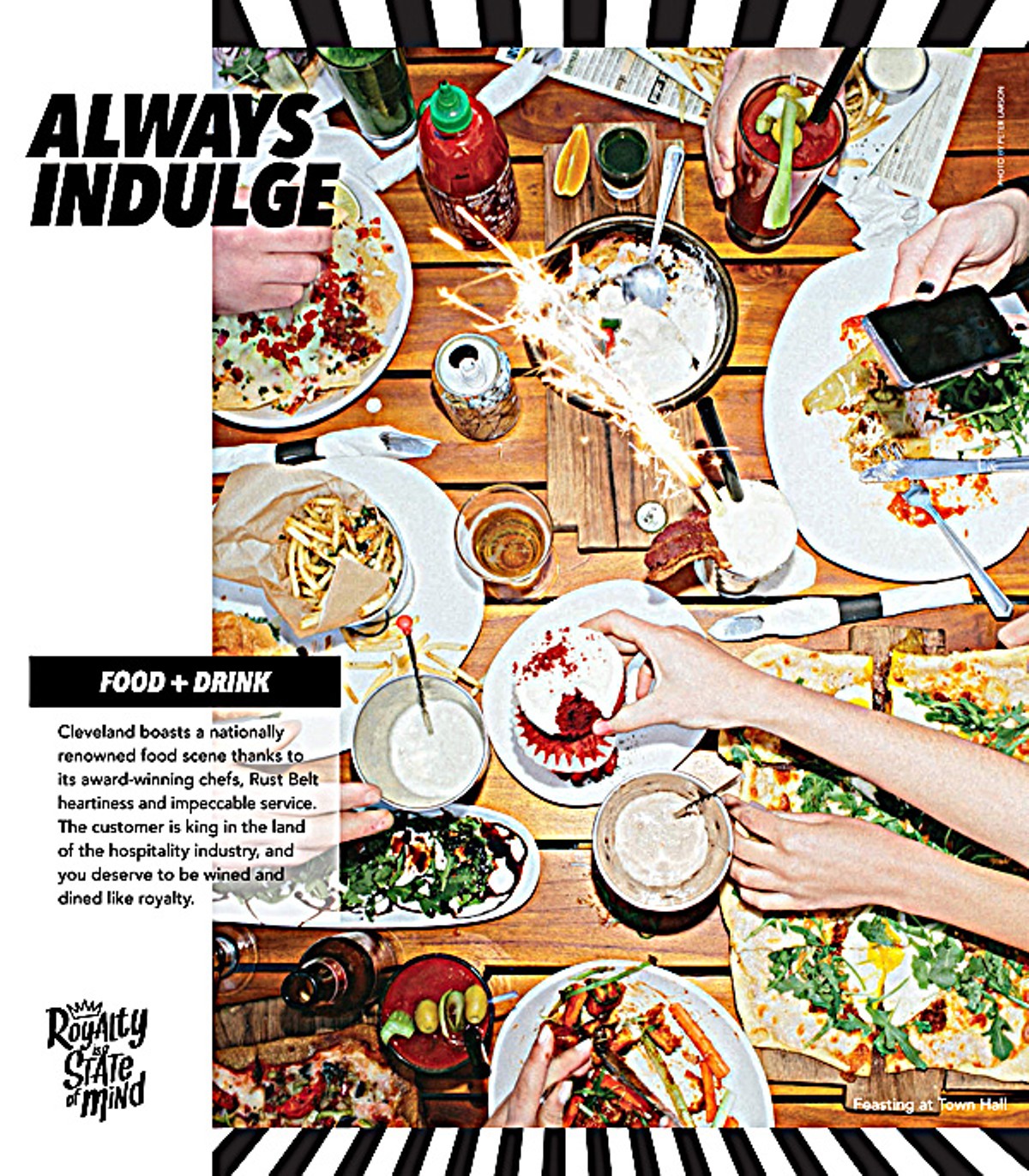 The "wings and beer" category is one of the most crowded within the restaurant world, and for good reason: It's easy to pull off. It is not easy, however, to pull off on a consistent basis, night after night in multiple locations as this thriving local chain has done since it opened its first tavern back in 1983 in Bedford Heights. Despite explosive growth, including the introduction of two new brands, the Lizard keeps smiles plastered on the faces of its customers by getting things right, night after night. That means serving up plump, meaty, perfectly fried and sauced chicken wings by the bucketful, along with a handful of other pub-appropriate snacks. And then there's the beer list, always one of the broadest and deepest in the region, punctuated by rare gems secured by multi-unit buying power. Knock back 100 beers off the Winking Lizard Tavern Tour of Beers and you'll be on the receiving end of the coveted Tour jacket.

Let's all agree to stop calling Superior Pho a "hidden gem" and start calling it what it is: one of the best and most popular restaurants in Cleveland that only fools have ignored. Sure, its location — tucked inside in a nondescript commercial building — is anything but conventional. But that doesn't stop the hoards of daily visitors who come for the amazing banh mi sandwiches, delightful cabbage salads, and the city's best bowls of pho. And then there's the owner, Manh Nguyen, who would be genuinely crestfallen if any one of his customers had anything short of a wonderful meal. Fortunately for him, that doesn't happen very often.

Few entities on this list are more Cleveland than the institution that is Hot Sauce Williams. Every so often a new place comes along and tries to emulate what Williams has perfected over the past five decades, but Clevelanders never forget the originator. There's no mistaking a Williams' Polish Boy or the restaurant's signature sauce-soaked fries. At once spicy and sweet, the sauce is so good that even the purveyors of edible marijuana in Colorado wanted to use it as a tasty base. You're as likely to find out-of-towners who learned about the joint on TV as you are somebody who lives down the block. And let's be honest: We've all been there for some late-night grub at one time or another. It's no shock Hot Sauce Williams is a repeat winner for this category.

Best Bloody Mary: The South Side

It's Sunday and not even noon yet, and you've already hit the wall... or at least your head feels like it. You've tried Tylenol and an energy drink, but nothing's working. You can thank last night's shenanigans for that. Really, a good Bloody Mary is the only thing that could possibly help you. Luckily, Tremont's trendy South Side restaurant has a variety to do the trick. There's no reason to settle for tomato juice, vodka, celery and spice when you can have shrimp, an oyster or even a hunk of bacon in it. Yep, bacon. In all, there's eight to choose from and they'll have you forgetting the previous night in no time, assuming that you remembered any of it in the first place.

Ever had the hollandaise sauce from your eggs Benedict basically explode in your mouth while you're trying to focus during an early morning breakfast meeting? How about having a mound of home fries so good that it takes you somewhere far away from the person sitting across from you? Those are the kinds of experiences that take place at Grumpy's. The staff is uber-welcoming, but not all in-your-face because they realize we're not all morning people. That, in and of itself, is welcoming. Grumpy's has several omelets and special dishes like the West 14th Special with corned beef hash, two eggs and toast. The restaurant also has the rare Tremont parking lot and free WiFi so you can check those pesky morning emails while you munch.

Why lie? You know Great Lakes is the first place that crosses your mind when you pair the words 'Cleveland' and 'brewery' together. Every seasonal beer offered ensures as much. If you have any doubt about GLBC's standing in the Midwest, just think about how often your friends from Columbus, Cincinnati and other cities have inquired about it or bubbled with excitement upon finding the beers in their local grocers. It's about so much more than the drinks though. The brewery offers a historic feel that few can match, evidenced by the brewery tours that often sell out weeks ahead of time. There's live music every Monday, and who doesn't enjoy tipping back a cold Dortmunder or nibbling on a pretzel on a beautiful day while sitting in the beer garden?

We can't imagine how many orders of biscuits and gravy must fly through the kitchen doors of this amazing Tremont cafe. It's the perfect brunch item: flakey homemade cheddar biscuits covered with creamy, porky gravy. But that's just one dish out of many that manages to rouse people from their weekend stupors. There's also the waffles with whipped cream, the egg-stuffed breakfast burrito, and the magical mish-mosh that is the Shipwreck. Pair one of those with the house latte, kissed with a whisper of local honey, and the day is almost guaranteed to turn out well. If you're looking for a $1.99 two-egg-with-meat-and-toast special, Lucky's might not be for you. But if you're on the hunt for scratch-made breakfast built from quality local ingredients, get in line — literally.