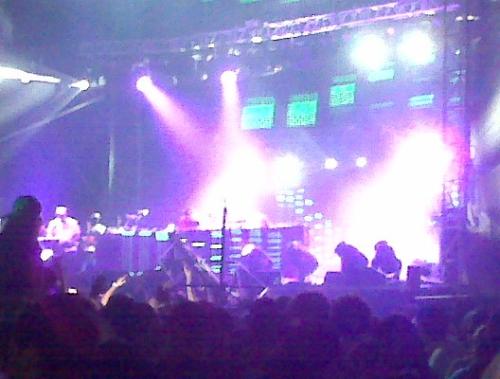 After Friday’s multi-genre affair, day two of Miami’s Ultra Music Festival got back to the basics of what the festival is all about: DJs, DJs and more beat-bouncing DJs. Bicentennial Park was a bit more packed and bursting with the enchanted energy of old-school rave.

Saturday wasn't about just these mainstage acts — it was about the heart of DJ world. Even the tiniest tents were full of newbie DJs trying to cut a break, and all were shown love. Hardly more than a pop-up tent, most were surrounded by the supportive funk sway of festivalgoers. All glow sticks, neon hair and platforms aside, it's obvious that the crowd was there for the electronic DJs.

Timbaland hit the stage in between fan favorites the Prodigy and Paul Van Dyk. The audience halfheartedly bobbed to the beats of “Sexyback.” Timbaland’s performance was announced on Thursday — an early taste of Shock Value 2, due laster this year. It is undeniably on the forefront of hip-hop, adapting dance music technology and dance sounds. Introducing such an innovative producer to the largest electronic-centric event did stabilize the inventive interaction between the urban and electronic genres that Timbaland so proudly supports. But Tim couldn't pull the weight of Paul Van Dyk or even the Prodigy.

Electronica’s answer to Rage Against the Machine, the Prodigy had the entire festival all stirred up in a violent glow-stick rage. With rumors buzzing all day that they missed their flight and may have to cancel, relieved ravers welcomed the trio with open arms. As expected, these guys tore the stage apart. Fans of the Prodigy's intensity weren’t disappointed yesterday. Despite the screeching on several tracks, the sound was, for the most part, pretty tight. Songs from their latest album, Invaders Must Die, were preformed as dance tracks onstage.

Combining big electronic dance beats with crashing rock 'n' roll, the band’s aggressive, in-your-face style was somewhat terrifying — especially frontman Keith Flint. Strut-skipping across the stage, these guys get enough cardio to appease even the toughest trainer. Blame it on jet lag, blame it on a Bicentennial Park full of enthusiasts, but no one seemed to notice or mind that the recorded yells of power turned into screeching yelps that were often painful to hear live. Nonetheless, cuts like "Firestarter" and "Smack My Bitch Up" (from 1997's chart-topping The Fat of the Land) were performed with unparalleled energy by both the Prodigy and the audience.

German trance legend Paul van Dyk's set snagged the fest's closing slot. He brought more intensifying energy through fist pumps than one can imagine. The park recognized his domination of the scene and fits-pumped right back. He featured his new album In Between in collaborations with David Byrne and the Pussycat Dolls' Jessica Sutta.

Over the course of Ultra Music Festival 2009, there were several reunions and several firsts. Some were more successful than others. The good news is that the festival promises to continue its evolution next year. It was a celebration of electonica and DJ scenes — where it's been and where it's heading. —Carissa Bowlin