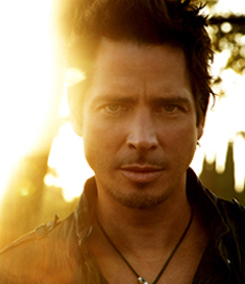 Last night’s Chris Cornell concert at House of Blues wasn’t the terrible mish-mash of tunes I half-expected it to be. Given the new, ill-conceived hip-hop attitude he displays on his latest release, Scream, the former Soundgarden/Temple of the Dog/Audioslave frontman suggests he’s trying to leave his hard-rock past behind and discover his inner soul child, albeit with a grunge twist.

By teaming up with beatmaster Timbaland, Cornell takes a contemporary, pop-oriented approach that fits about as well as that big suit David Byrne wore in Stop Making Sense. In other words, the album’s an awkward transition that doesn’t really suit the iron-lunged singer who might just have the best set of pipes this side of Robert Plant.

But live, the new tunes had a bit more immediacy to them, thanks to a four-piece band that was able to emphasize their rock tendencies. That said, there were still some rough spots (which made for good bathroom breaks) during the two-hour show. Notably, when Cornell shifted from Audioslave’s hard-rocking “Cochise” into a couple of techno-tinged tunes from Scream (“Watch Out” and the title track) that would be groovy if Justin Timberlake sang them. But it's not so good when you’re playing to a crowd of backward-baseball-cap guys in leather jackets.

And his young bandmates (particularly the bassist, who looked like Daughtry on steroids) spent a little too much time soloing atop speaker monitors. The concert’s best moments were predictably the ones that found Cornell revisiting his past. Temple of the Dog’s “Hunger Strike” was vibrant and found the audience singing the parts Eddie Vedder sang on the original. An acoustic version of Soundgarden’s “Fell on Black Days” showed just how well Cornell’s voice has held up over the years. And Cornell killed it on Soundgarden’s “Spoonman,” which had a raucous energy that was only slightly diminished by a gratuitous drum solo.

Other highlights included a stripped-down cover of Michael Jackson’s “Billie Jean” that nicely reinvented the tune (thankfully without any pre-recorded help from Timbaland) and the show-closing “Black Hole Sun,” which found Cornell graciously accepting a Cleveland Browns shirt that a fan threw onstage. —Jeff Niesel